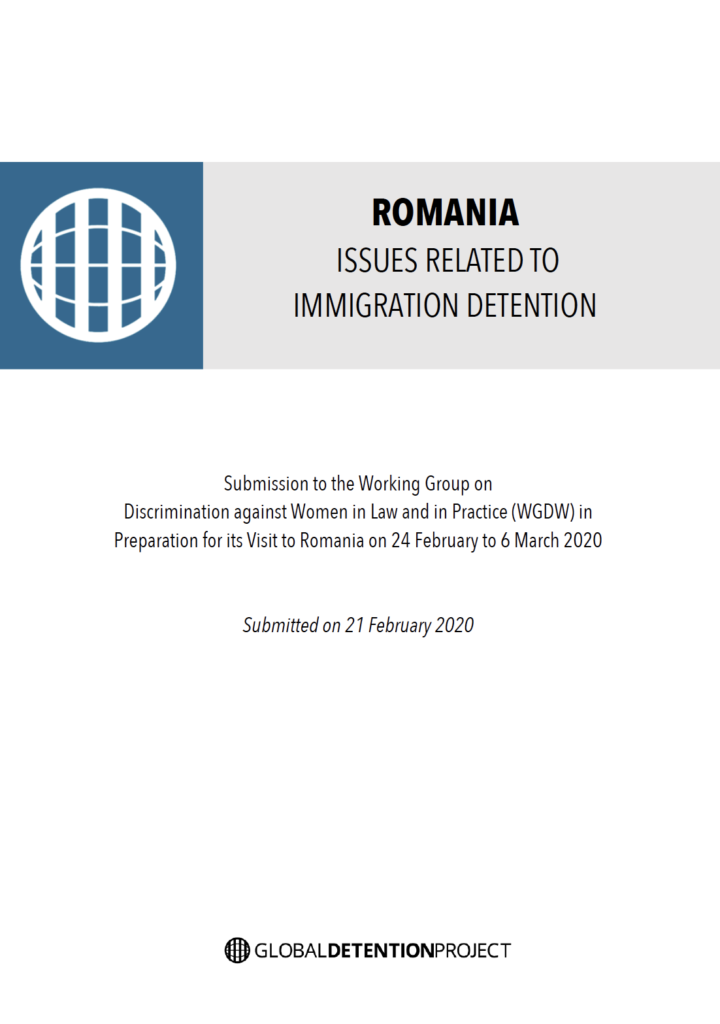 Submission to the Working Group on Discrimination against Women in Law and in Practice (WGDW) in preparation for its visit to Romania on 24 February to 6 March 2020.

The Global Detention Project (GDP) is an independent research centre based in Geneva, Switzerland, which investigates the use of detention as a response to international immigration. Its objectives are to improve transparency in the treatment of detainees, to encourage adherence to fundamental norms, to reinforce advocacy aimed at reforming detention practices, and to promote scholarship of immigration control regimes.

This submission to the Working Group on Discrimination against Women is framed within the Working Group’s mandate to promote and exchange views on best practices related to the elimination of laws and practices that discriminate against women or are discriminatory to women in terms of implementation or impact. It also takes note of the Working Group’s intention to pay particular attention to women and girls who encounter multiple and intersecting forms of discrimination, including migrant and asylum seeking women and girls.[1] In particular, this submission highlights recent immigration detention practices in Romania that may be discriminatory with respect to the health, well-being, and legal standing of women and girls who are subject to migration control measures in the country.

I. Relevant Detention Policies and Practices according to Romanian Law

II. Relevant Detention Policies and Practices according to the Government of Romania

In its 2019 submission to the Committee on Migrant Workers questionnaire seeking input for the drafting of its General Comment No. 5 on Migrants’ Rights to Liberty and Freedom from Arbitrary Detention,[3] the Government of Romania states that “Women and families in detention are housed separately from other people staying in the centre, making them the appropriate level of privacy.”

The Government of Romania further contends that when assessing whether to apply detention measures as part of removal procedures, it seeks to determine the level of vulnerability of each individual, contending that “usually” “vulnerable persons are tolerated in Romania as an alternative measure to detention. Vulnerable persons accommodated in centres are entitled to medical care and appropriate treatment for their specific situations.”[4]

III. Detention Policies and Practices according to Civil Society Reports

In its most recent update regarding the treatment of asylum seekers in Romania for the Asylum Information Database (AIDA), JRS Romania reports that vulnerable groups such as families and pregnant women are detained in the country. Additionally, the report finds that children, including girls, who declare themselves minors but are unable to prove their age can be placed in detention pending an age assessment.[5]

The AIDA report further finds that asylum applications of vulnerable asylum seekers, including pregnant women, are not examined with priority in some centres and that there are important limitations in the availability of female interpreters during asylum procedures in most centres.

According to Global Detention Project data on Romania, non-citizens can be detained for reasons relating to their immigration status in three different types of facilities[6]:

The Arad Detention Centre (Centre for the Accommodation of Foreigners taken into Public Custody” (Centrul de Cazare a Străinilor luaţi în Custodie Publică)), located close to the border with Hungary, was first opened in 2001, before being renamed in 2003 and being placed under the authority of the General Inspectorate for Immigration (IGI) in 2012. Until July 2015, the centre had capacity for 46 persons, however following an “extension and modernisation” project, the centre was enlarged to consist of two buildings and now features 160 places—which can be increased to 206 in emergency situations. The centre can employ 62 people. According to the JRS, two persons were released from Arad Detention Centre in 2018 due to their medical condition. One of these cases was a young child who, among several conditions, was suffering from severe viral conjunctivitis, and as a result the rest of their family was also released.

The Otopeni Detention Centre (Centre for the Accommodation of Foreigners taken into Public Custody (Centrul de Cazare a Străinilor luaţi în Custodie Publică), is located close to the Henri Coandă Airport, some 15 kilometres from Bucharest. The centre was established in 1999 and was refurbished between 2004 and 2005 using a PHARE grant. In 2016, the centre could hold up to 164 persons, however capacity has since decreased, and as of 2018 it can hold up to 114 persons. The centre is comprised of two buildings with 21 rooms, each of which contains four, six, eight, or 12 beds. Rooms are equipped with beds, mattresses, a metal closet, a table with chairs, and a TV. They have their own sanitary complex. Women are reportedly accommodated separately from men.

In December 2018, the Romanian ombudsman conducted an unannounced visit to the centre and found it to be generally in an adequate condition. However, at the time of the ombudsman’s visit detainees reported that despite the facilities, no recreational activities were organised due to a lack of specialised personnel. The ombudsman thus recommended ensuring that such activities are provided. During that same visit, the ombudsman also observed that women and vulnerable persons are allowed to move freely within common spaces between 08.30 and 13.00 while men are provided access between 13.00 and 19.00. In 2016 however, the Subcommittee on the Prevention of Torture (SPT) had noted that detainees were generally locked up all day with minimum contact with other detained persons.

[1] Office of the UN High Commissioner for Human Rights, “Romania: First Visit by UN Experts on Discrimination Against Women and Girls,” 21 February 2020, https://www.ohchr.org/EN/NewsEvents/Pages/DisplayNews.aspx?NewsID=25588&LangID=E

[7] UN Subcommittee on Prevention of Torture and Other Cruel, Inhuman or Degrading Treatment or Punishment (SPT), “Visit to Romania Undertaken from 3 to 12 May 2016: Observations and Recommendations Addressed to the State Party,” 8 March 2018, https://tbinternet.ohchr.org/_layouts/15/treatybodyexternal/Download.aspx?symbolno=CAT%2fOP%2fROU%2f1&Lang=en