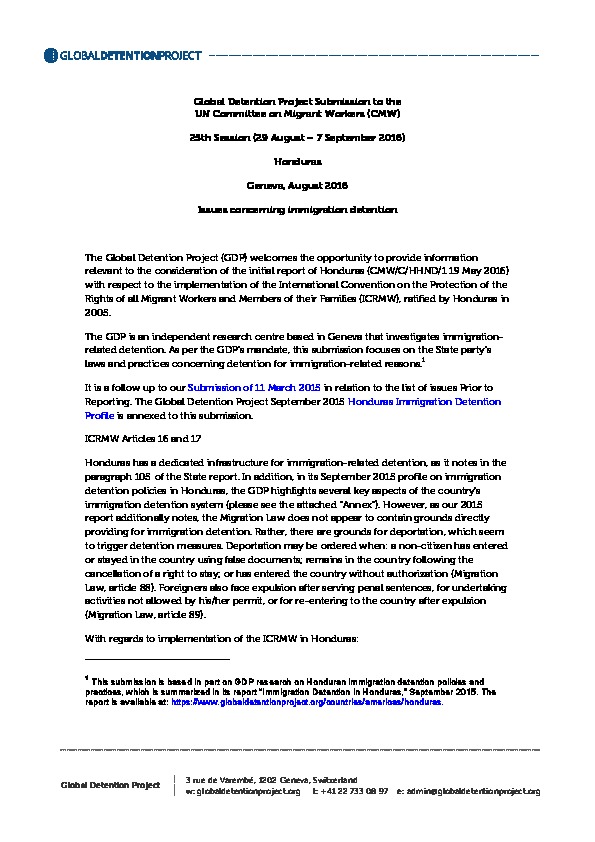 The Global Detention Project (GDP) welcomes the opportunity to provide information relevant to the consideration of the initial report of Honduras (CMW/C/HHND/1 19 May 2016) with respect to the implementation of the International Convention on the Protection of the Rights of all Migrant Workers and Members of their Families (ICRMW), ratified by Honduras in 2005.

It is a follow up to our Submission of 11 March 2015 in relation to the list of issues Prior to Reporting. The Global Detention Project September 2015 Honduras Immigration Detention Profile is annexed to this submission.

Honduras has a dedicated infrastructure for immigration-related detention, as it notes in the paragraph 105 of the State report. In addition, in its September 2015 profile on immigration detention policies in Honduras, the GDP highlights several key aspects of the country’s immigration detention system (please see the attached “Annex”). However, as our 2015 report additionally notes, the Migration Law does not appear to contain grounds directly providing for immigration detention. Rather, there are grounds for deportation, which seem to trigger detention measures. Deportation may be ordered when: a non-citizen has entered or stayed in the country using false documents; remains in the country following the cancellation of a right to stay; or has entered the country without authorization (Migration Law, article 88). Foreigners also face expulsion after serving penal sentences, for undertaking activities not allowed by his/her permit, or for re-entering to the country after expulsion (Migration Law, article 89).

With regards to implementation of the ICRMW in Honduras:

Can Honduran authorities explain what is meant by the statement in paragraph 119 of the State report, which states that “no migrant workers have been deported”? Who actually gets deported following detention?

What are the grounds provided in law, including in both immigration and criminal law, that allow the detention of migrants? Does the law provide for specific penalties or punitive sanctions—in addition to administrative detention—for violations related to unauthorized entry, exit, or stay in the country (see reference to “administrative sanctions” in paragraph 119)? Do detainees have access to legal counsel? Do they have the right to appeal against detention order? Does a court review detention order?

The maximum period of detention appears to be 90 days. What is the average detention period in practice? Does Honduras provide alternatives to detention? If so, what kinds of alternatives are used? Are minors protected from immigration detention?

Please indicate whether the following categories of individuals can be placed in immigration detention: minors (anyone under 18 years of age), asylum seekers, bona fide refugees, pregnant women, victims of torture, or victims of trafficking.

Noting that Honduras has two operational specialized immigration detention centres (Centros de Atencion al Migrante Irregular) in Tegucigalpa and Choluteca, (State Report § 105) please provide information on conditions of detention of migrant workers and members of their families: (What are the capacities of these centres? Are women and men detained separately? Are families separated?

What institutions can visit these centres (Ombudsman, NGOs)? Do they regularly conduct visits? Does Honduras make use of any additional facilities for the purposes of detaining foreign nationals for immigration-related reasons, even for very short periods of time?

Has the Instituto Nacional de Migración drafted, approved and published the regulations for assistance and stay in dignity in detention centres for migrants (reglamento para la asistencia y estancia digna en los centros de detención de migrantes)? This was due in 2014.[2]

Reports indicate that in the past Honduran authorities collaborated with officials from other countries, namely the United States, to undertake multilateral anti-smuggling operations that led to the arrest of both suspected smugglers and undocumented migrants from third countries. These operations reportedly led to the detention of numerous third-country nationals, the costs of which were at least in part paid by U.S. officials.[3] Has Honduras recently or does it currently have any similar collaborative anti-smuggling arrangements in place with other countries targeting alleged smuggler in Honduras? If so, have these operations led to the detention of third-country nationals on grounds of immigration status? Does the government receive money from any foreign government to detain and deport people from its territory?

[1] This submission is based in part on GDP research on Honduran immigration detention policies and practices, which is summarized in its report “Immigration Detention in Honduras,” September 2015. The report is available at: https://www.globaldetentionproject.org/countries/americas/honduras.