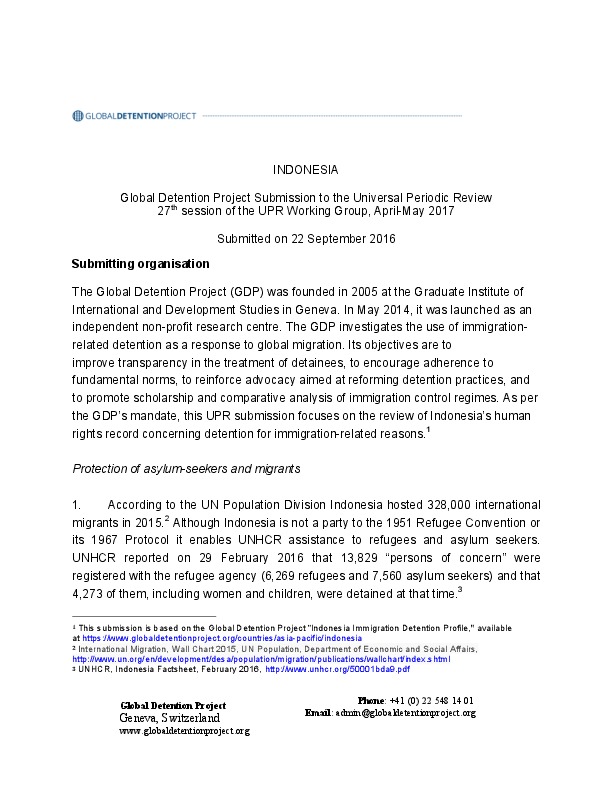 The Global Detention Project (GDP) was founded in 2005 at the Graduate Institute of International and Development Studies in Geneva. In 2014, it was launched as an independent non-profit research centre. The GDP investigates the use of immigration-related detention as a response to global migration. Its objectives are to improve transparency in the treatment of detainees, to encourage adherence to fundamental norms, to reinforce advocacy aimed at reforming detention practices, and to promote scholarship and comparative analysis of immigration control regimes. As per the GDP’s mandate, this UPR submission focuses on the review of Indonesia’s human rights record concerning detention for immigration-related reasons.[1] (For more information, see the Indonesian detention profile.)

Protection of asylum-seekers and migrants

Key priorities for Indonesia with regards to immigration detention

[1] This submission is based on the Global Detention Project “Indonesia Immigration Detention Profile,” available at https://www.globaldetentionproject.org/countries/asia-pacific/indonesia

[4] Articles 2 and 13 of the Regulation from the Director General of Immigration Number F-1002.PR.02.10 Year 2006 concerning Procedures for the Detention of Foreigners.

[5] Article 10(1) of the Regulation from the Minister of Law and Human Rights of the Republic Indonesia Number M.05.IL.02.01 Year 2006 about Immigration Detention House

[7] Agency for Developing Human Rights and Ministry of Justice and Human Rights of the Republic of Indonesia. Handbook on Human Rights Guidelines for IDC staff, Chapter B, part C.1.g. October 2011.

[16] Report of the Working Group on the Universal Periodic Review, Indonesia, Human Rights Council, A/HRC/21/7, recommendations 108.137 by the Islamic Republic of iran and 108.138 by Lebanon