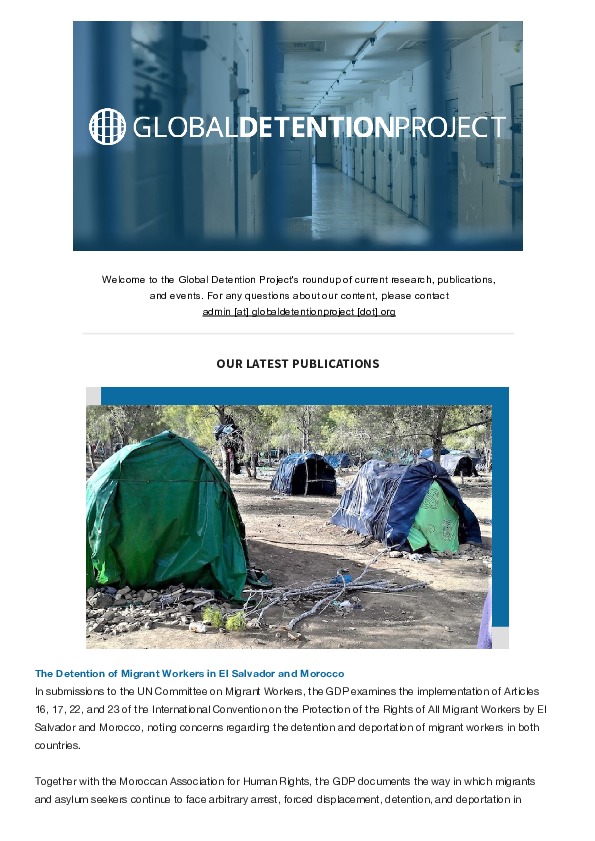 The Detention of Migrant Workers in El Salvador and Morocco

In submissions to the UN Committee on Migrant Workers, the GDP examines the implementation of Articles 16, 17, 22, and 23 of the International Convention on the Protection of the Rights of All Migrant Workers by El Salvador and Morocco, noting concerns regarding the detention and deportation of migrant workers in both countries:

As part on-going efforts to strengthen scholarship on immigration detention and expand the range of researchers collaborating on our online database—the Global Immigration Detention Observatory—the GDP recently welcomed several new student volunteers from the Zurich University of Applied Sciences’ Department of Business Law. The students, who are volunteering as part of the department’s International NGO Law and Policy Project (NLPP) under the supervision of Dr. Alexandra Dufresne, have participated in a series of online workshops provided by GDP director Michael Flynn and adviser Mariette Grange discussing the scope and contours of immigration detention and the relevant international human rights legal framework.

The EU Pact on Migration: A Heavy Emphasis on Returns

On 23 September, the EU Commission presented its widely anticipated EU Pact on Migration. Although the pact was presented as an “opportunity to uphold human rights in migration governance,” many observers have warned that the pact will lead to more suffering, not less. Areas of concern include its emphasis on returns and border controls, expedited asylum procedures, and plans for enhanced collaboration with countries like Libya, where thousands are already arbitrarily detained. Attempting to strike a balance between solidarity and responsibility, the pact proposes the concept of “return sponsorship,” whereby states unwilling to accept new arrivals will instead be able to contribute by supporting the return of rejected asylum seekers. Many fear that that this attempt to end state inaction may end up encouraging them to prioritise returns over relocation. The proposed pact will now be negotiated by the European Parliament and EU member states.

For over a decade, the GDP has relentlessly pushed states to provide better migration detention data, in particular in the European Union, where Eurostat maintains a wealth of statistics on a range of key immigration enforcement measures—except detention. Until now. In June, the European Parliament and the Council of the European Union adopted proposed reforms to the Migration Statistics Regulation (Regulation (EC) No 862/2007) governing the provision of data by EU states to Eurostat on migration and international protection. The amended regulation also requires states to more frequently report statistics on a host of policies related to returns and asylum as well as related administrative and judicial procedures. Importantly, the amended regulation also calls on Eurostat to establish a “pilot study” to “test the feasibility of new data collections or disaggregations,” including with respect to:

Read: Regulation (EU) 2020/851 of the European Parliament and of the Council of 18 June 2020 amending Regulation (EC) No 862/2007 on Community statistics on migration and international protection

Bahrain: Steps Taken to Avoid the Detention of Non-Nationals

Responding to the GDP’s Covid-19 Survey, our partners at Migrant-Rights.org have reported that Bahrain’s authorities have taken several important steps to protect non-nationals during the pandemic. The country’s Ministry of Interior issued a circular ordering authorities not to arrest and detain migrants due to their irregular status until the end of the year. An additional circular states that non-nationals are not to be detained for minor or administrative offences. If you, too, have information pertaining to the treatment of non-nationals during the pandemic, please consider completing our Covid-19 survey HERE. (You can also sign up to receive our weekly monitoring updates here.)

In the first of a three-part webinar series organised by Statewatch and the Transnational Institute, former GDP researcher Izabella Majcher joined Tineke Strik MEP and legal anthropologist Jill Alpes to discuss the EU’s Return Directive. During the event, Majcher discussed research she conducted with Mariette Grange and Michael Flynn for the GDP’s recently published volume, Immigration Detention in the European Union: In the Shadow of the “Crisis.” More information about the book is available here.

“Performing States of Crisis: Exploring Migration Detention in Israel and Denmark,” I. Amit and A. Lindberg, Patterns of Prejudice, September 2020.

“Bare Life in an Immigration Jail: Technologies of Surveillance in U.S. Pre-Deportation Detention,” A. Radziwinowiczówna, Journal of Ethnic and Migration Studies, August 2020.

“A Comparative Analysis of the Femicide of Migrant Domestic Workers in Bahrain and Lebanon,” M. Al-Hindi, Contemporary Challenges: The Global Crime, Jusice, and Security Journal, September 2020.