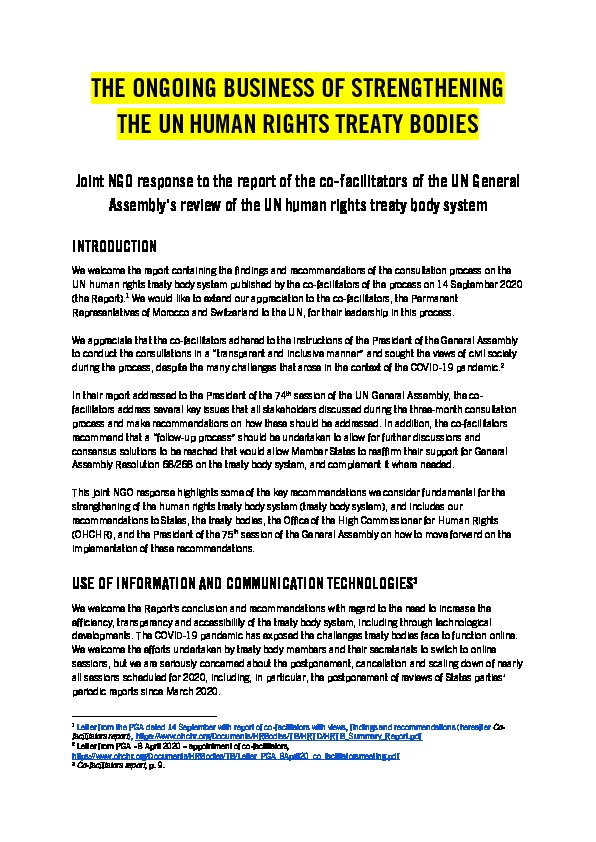 The GDP has joined more than 150 NGOs around the world to address the co-facilitators of the UN General Assembly’s review of the human rights treaty body system:

“We welcome the report containing the findings and recommendations of the consultation process on the UN human rights treaty body system published by the co-facilitators of the process on 14 September 2020 (the Report). We would like to extend our appreciation to the co-facilitators, the Permanent Representatives of Morocco and Switzerland to the UN, for their leadership in this process.

We appreciate that the co-facilitators adhered to the instructions of the President of the General Assembly to conduct the consultations in a “transparent and inclusive manner” and sought the views of civil society
during the process, despite the many challenges that arose in the context of the COVID-19 pandemic.

In their report addressed to the President of the 74th session of the UN General Assembly, the co-facilitators address several key issues that all stakeholders discussed during the three-month consultation process and make recommendations on how these should be addressed. In addition, the co-facilitators recommend that a “follow-up process” should be undertaken to allow for further discussions and consensus solutions to be reached that would allow Member States to reaffirm their support for General Assembly Resolution 68/268 on the treaty body system, and complement it where needed.