In the last two months, the number of suicide attempts on Manus Island—home to Australia’s notorious offshore migrant facility where more than 800 refugees and asylum seekers are stranded after spending years in detention—has skyrocketed. According to @Shamindan, an asylum seeker documenting life inside the facility, there have been some 90 suicide attempts and self-harm incidents since May, when the current coalition government in Australia shockingly won reelection, dashing the hopes of the Manus refugees.

Housed in facilities that do not meet refugees’ basic needs, forced to languish in a seemingly indefinite limbo with no information on when or how their situations will be resolved, and living in constant fear of violence from locals, these people are being punished rather than protected.

But Australia is far from alone in turning its back on refugees and asylum seekers. Indeed, many countries—including, notably, in the European Union—have for years sought to emulate Australia’s detention practices, including its offshoring of detention.

The fact is, around the world, those seeking safety and sanctuary are increasingly being confronted with barriers and bars, despite Article 31 of the Refugee Convention providing that states shall not impose penalties, on account of their illegal entry or presence, on refugees coming from a territory where their life or freedom was threatened. These developments are occurring against a backdrop of growing social, political, economic, and environmental problems that are forcing people to leave their homes, as UNHCR recently pointed out in its Global Trends report.

Numerous recent GDP reports have highlighted these trends, including: Portugal’s systematic detention of asylum seekers at ports of entry while simultaneously offering to resettle refugees; the expansion of grounds for detaining asylum seekers in the Czech Republic, France, and Lithuania; the discrimination in Bulgaria of asylum seekers from certain countries, like Afghanistan, Turkey, Algeria, Indonesia, and China; and efforts by the EU and its members states like Malta to block boats carrying refugees, asylum seekers, and migrants, leaving them stranded at sea or forced back into the hands of Libyan forces and indefinite arbitrary detention—or worse.

In his award-winning book about his experience being detained on Manus Island for more than six years, No Friend but the Mountains, journalist Behrouz Boochani—a Kurdish-Iranian asylum seeker who remains stranded on Manus—relates in excruciating detail the terrible toll that indefinite detention has on people. “I am a piece of meat thrown into an unknown land, a prison of filth and heat,” he writes.

In an article for the Guardian, Boochani commented about Australia, the country that condemned him to his fate on Manus Island: “How can a nation look to the future when its leaders cage little children for years, in a remote and forlorn prison?” He added: “Australia needs a moral revolution.”

Australia … and indeed many other countries across the globe. 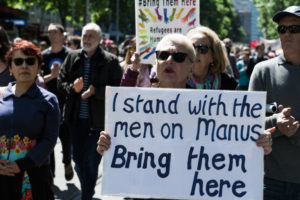