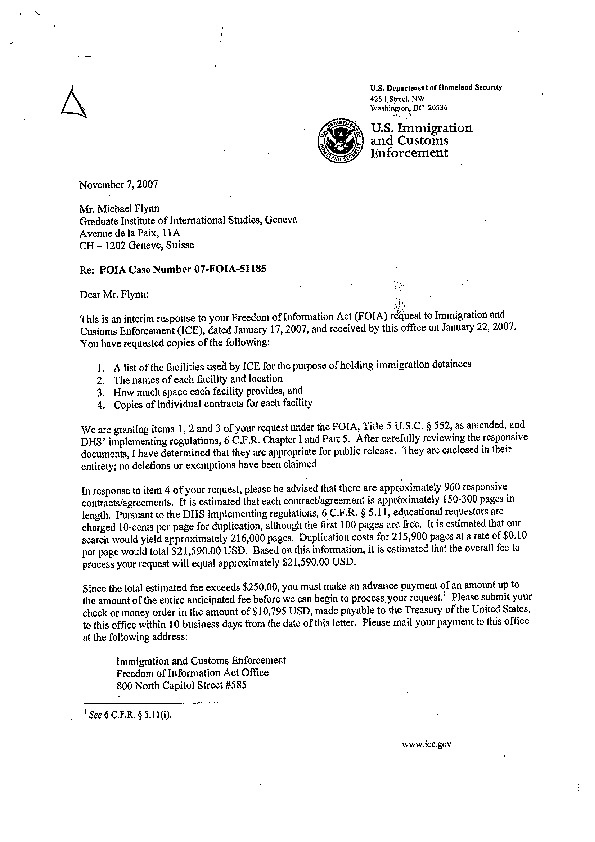 This is the response sent by the U.S. Immigration and Customs Enforcement freedom of information office on 7 November 2007 to Michael Flynn, then the lead researcher of the Global Detention Project when it was still an academic research project based at the Graduate Institute of International Studies in Geneva, Switzerland. The GDP team had sent a FOIA request seeking information about all the facilities “used by ICE for the purpose of holding immigration detainees.”

The list of detention sites that the GDP team received, which was accompanied by an official letter from an ICE FOIA officer, included more than 900 local prisons, federal penitentiaries, juvenile detention centers, private prisons, dedicated immigration detention centres, and social welfare institutions used to house unaccompanied children. All of these facilities were at that time, in 2007, under some form of agreement with ICE to provide bed space for people in ICE custody, in addition to children whose care had been shifted to the Office of Refugee Resettlement (ORR) of the Department Heath and Human Services. This FOIA response became the GDP’s first spreadsheet of detention centres, which would eventually grow to include nearly 3,000 facilities in more than 100 countries and serve as the basis for developing the global map of detention sites that one can find on the GDP’s website today.

The 2007 GDP FOIA request also sought details of the contracts between the federal government and the prisons and detention centres that confined migrants and asylum seekers, primarily with a view to understanding better the contractual terms offered private prison companies. The ICE FOIA office responded to this request reporting that there were at that time “approximately 960 responsive contracts/agreements” each of which was 150-300 pages long, which “would yield 216,000 pages.” They stated that the “duplication costs” would run approximately 21,590 USD, and that in order to process our request, would need to prepay 10,795 USD, a sum the GDP team did not have at its disposal.