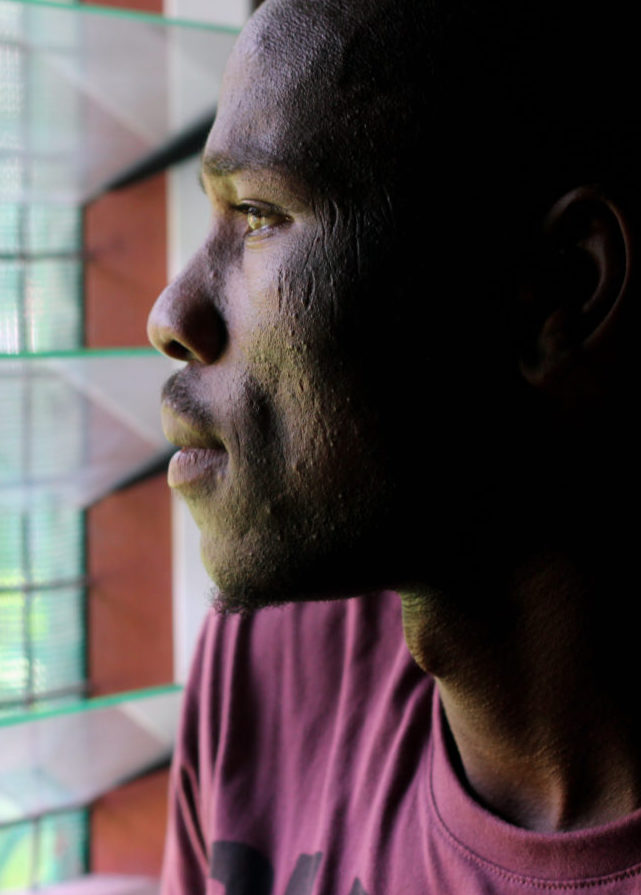 In 2013, Abdul Aziz Muhamat’s father put him on a flight departing Sudan when conflict threatened the family. His journey to freedom and safety, however, was cut short when the Australian navy intercepted the boat he had boarded leaving Indonesia en route to Australia and sent him to the notorious—and now-defunct—offshore detention centre on Manus Island, Papua New Guinea. Aziz languished on Manus for nearly six years, but throughout that time he was an indefatigable advocate for those trapped in Australia’s offshore detention system. Today, Aziz lives in Switzerland, where he was granted asylum after receiving Geneva’s prestigious Martin Ennals Award for Human Rights Defenders in 2019. In 2021, Aziz joined the GDP as a research and advocacy fellow, where he has applied his lived experience as a refugee and detainee to learn, critique, and enrich our efforts to develop data and evidence that can empower calls for protecting the human rights of all people ensnared in abusive migration detention systems. Executive Director Michael Flynn spoke to Aziz about his experiences, challenges he sees in making advocacy more effective, and his plans for the future.

MF: I had initially considered calling this interview “The Power of Lived Experience.” However, it may be more appropriate to frame this as the “tragedy” of lived experience given what you and others have suffered on Manus Island and in other immigration detention centres around the world.

Aziz: Well, that is true, because this lived experience is not one that I chose to live, it was imposed on me, I was unwillingly forced to live it. But I have taken this as an opportunity to learn, and I want to use the experience to prevent others from having to live this tragedy. So there has been this positive experience built on a negative one: Learning about the need to bring visibility to the suffering we experience in immigration detention. And this has led to a second positive experience: Actually, getting out of detention, finally, after so many years, because of our efforts to ensure that people knew what was happening to us. This is empowering.

MF: You’re now working on a degree at university, you’ve been granted asylum by Switzerland, you’ve received an important human rights defender award, you have worked with us at the GDP to document detention through data, you have had many experiences engaging the international community here in Geneva … all of this after spending some six years in Australia’s offshore detention system. This lived experience gives you a unique perspective on advocacy. How do you view these different worlds and what value does each bring?

Aziz: When you are an advocate at the grassroots level, as we were at Manus, you only have very limited resources—a cell phone, social media, written words, rallies, media outreach. You have to make every effort to get the most out of these. This is hard to replicate at the international level: I can’t use the same limited resources and get the same impact because there is a system that everything goes through, a different way of expressing yourself. … But you also have the possibility of getting much more visibility. And this international visibility can help you to use the few tools that we have at this level, like naming and shaming. You can also find many more allies at the international level, something that is just not accessible when you are advocating from inside detention.

MF: What can we do to improve the impact that research and advocacy at the international level have on the ground?

Aziz: A lot in fact. For example, when I read an academic paper about immigration detention, I sense that there is something missing, and that is the human experience of what the paper is talking about. This same view is missing from international advocacy as well. As a refugee and former detainee, I constantly ask myself whether what I am reading reflects what I have been through. And I think that there is always a gap.

MF: Reflecting on your experience working with us at the Global Detention Project, what are some of the strengths and weaknesses of our approach?

Aziz: The strength of the GDP project is that it works to draw clear lines around what we can observe in detention and the systems that create it. The experience of trying to understand how to do this has given me a strong feeling that there is a way to actually document this reality, to know it and express it in new and effective ways. But this effort by itself does not lead you to a solution, it does not show you how to change the system. As a former detainee there can also be discomfort in thinking this way, like getting statistics on detainee “stock” and “flow.” I was part of that stock and flow.

MF: You are one of a group of former Manus detainees who have made your voices heard in calling for change in Australia’s and other country’s immigration detention practices. What is it about your experience that produced so many committed and outspoken advocates?

Aziz: What happened to us on Manus drove us to make a strong commitment to let the world know about it. But our efforts made us realise that even in these liberal democracies that are supposedly committed to human rights, in fact few people knew about the suffering their countries were causing, which drove us to speak out about it on a day-to-day basis, every day, using a smuggled cell phone, contacts with NGOs, journalists. Some of us were good at writing, some were good at speaking. Our commitment led us to build a method out of advocacy: We were not only working to let the world know what was happening to us, but we were also healing ourselves. And so advocacy became healing.

MF: Where do you go from here?

Aziz: This is a question I have been asking myself for some time. But I know that I will always move towards suffering, to where I can contribute to alleviate pain. The issue of refugees and how they are treated is not a new one, it has been here for a long time. I know this. But if I can make a contribution to change how refugees are treated, to prevent the harm of detention, then I intend to proceed along that path.