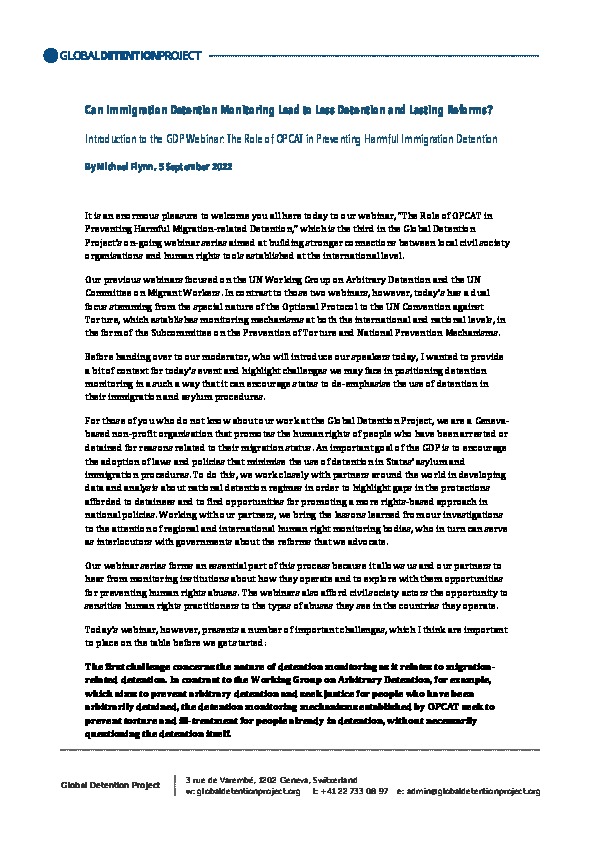 Introduction to the GDP Webinar: The Role of OPCAT in Preventing Harmful Immigration Detention

It is an enormous pleasure to welcome you all here today to our webinar, “The Role of OPCAT in Preventing Harmful Migration-related Detention,” which is the third in the Global Detention Project’s on-going webinar series aimed at building stronger connections between local civil society organisations and human rights tools established at the international level. [For more about this event, visit the webinar page here.]

Our previous webinars focused on the UN Working Group on Arbitrary Detention and the UN Committee on Migrant Workers. In contrast to those two webinars, however, today’s has a dual focus stemming from the special nature of the Optional Protocol to the UN Convention against Torture, which establishes monitoring mechanisms at both the international and national levels, in the form of the Subcommittee on the Prevention of Torture and National Prevention Mechanisms.

Before handing over to our moderator, Veronica Filippeschi of the Association for the Prevention of Torture, an organization whose history is intimately associated with that of the OPCAT, I wanted to provide a bit of context for today’s event and highlight challenges we may face in positioning detention monitoring in such a way that it can encourage states to de-emphasise the use of detention in their immigration and asylum procedures.

For those of you who do not know about our work at the Global Detention Project, we are a Geneva-based non-profit organisation that promotes the human rights of people who have been arrested or detained for reasons related to their migration status. An important goal of the GDP is to encourage the adoption of laws and policies that minimise the use of detention in states’ asylum and immigration procedures. To do this, we work closely with partners around the world in developing data and analyses about national detention regimes in order to highlight gaps in the protections afforded to detainees and to find opportunities for promoting a more rights-based approach in national policies. Working with our partners, we bring the lessons learned from our investigations to the attention of regional and international human rights monitoring bodies, who in turn can serve as interlocutors with governments about reforms we advocate.

Our webinar series forms an essential part of this process because it allows us and our partners to hear from monitoring institutions about how they operate and to explore with them opportunities for preventing human rights abuses. The webinars also afford civil society actors the opportunity to sensitise human rights practitioners to the types of abuses they see in the countries they operate.

Today’s webinar, however, presents a number of important challenges, which I think are important to place on the table before we get started.

The first challenge concerns the nature of human rights-based detention monitoring as it relates to migration-related detention, which is an activity that to a large extent focuses on the right to security of person rather than the right to liberty. In contrast to the Working Group on Arbitrary Detention, for example, which aims to prevent arbitrary detention and seek justice for people who have been arbitrarily detained, on-site detention monitoring mechanisms generally are intended to prevent torture and ill-treatment for people already in detention, without necessarily questioning the underlying reason for the detention.

Detention monitoring is, of course, an incredibly important activity that must be vigorously pursued. All people must be protected from abuses when in official custody. This begs the question, however: What if the nature of the detention measure is itself harmful? A growing number of organisations, including the World Health Organisation, have indicated that immigration detention may be inherently harmful, and not just for children and other at-risk groups, but for all people subject to such measures.

I think that an important challenge for us today is try to imagine how the work of these OPCAT monitoring bodies can be positioned in such a way as to not only call for better treatment of immigration detainees, but also to discourage states from relying on this measure. In other words, is it possible for immigration detention monitoring to lead to less detention rather than more?

The second challenge I see relates to a peculiar quality of immigration detention: In most countries, migration detainees are not charged with crimes; rather, people are detained as a convenience to states to ensure completion of immigration procedures, the main one being removing a person from a country.

This is a critical distinction for us to keep in mind: While prison systems are at least nominally intended to prepare people to re-enter societies, immigration detention is largely intended to permanently remove people from a society. I was reminded of the significance of this difference recently as the GDP has worked closely with the World Health Organisation in recent months to develop a global evidence review of health indicators in immigration detention settings. One of the things that became apparent during the course of that investigation was the seeming widespread lack of will on the part of states to implement health-related reforms in consistently or enduringly.

The question that arises from these observations about immigration detention is whether there is something inherent in its underlying raison d’etre—removal rather than reform—that leads inexorably to apathy or lack of care on the part of officials. Are immigration detention officials inured to abuses in detention because of apathy that stems from who they are detaining: people who they intend to remove from—rather than return to—their societies? If so, the challenge we all face, both civil society and detention monitoring bodies, is to find ways to overcome apathy to ensure that reforms are implemented in a sustainable way.

I look forward to exploring these questions with you all today. I would also like to reiterate the GDP’s gratitude to all of our speakers for agreeing to share with us your thoughts, experiences, and insights about this critical arena for protecting the rights of migrants, refugees, and asylum seekers.