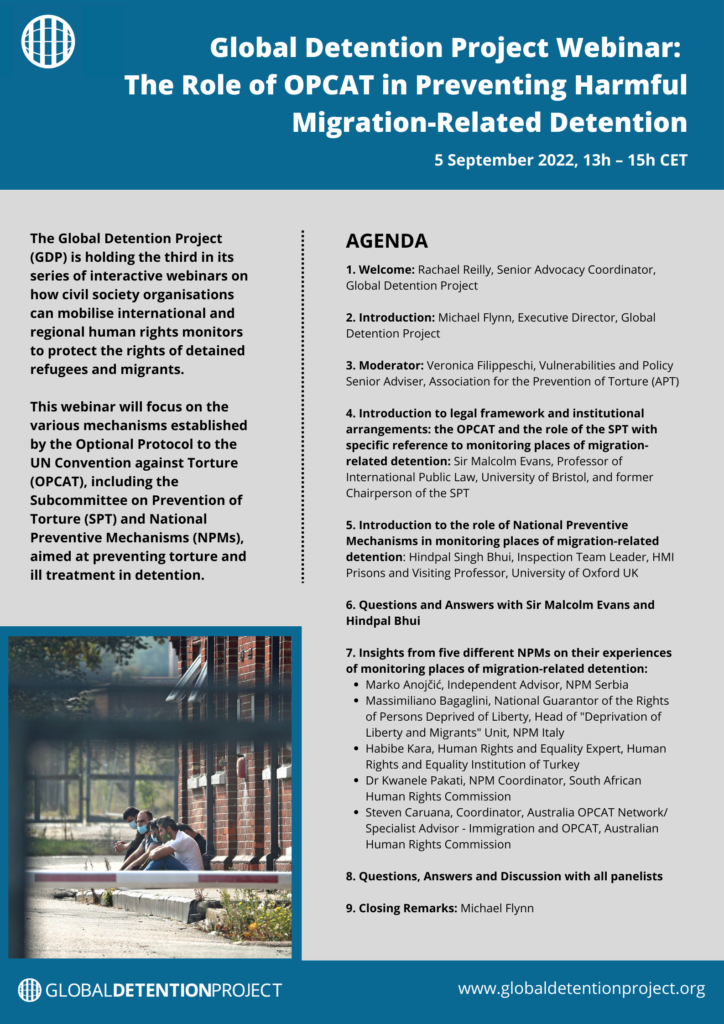 On Monday 5 September, the GDP hosted the third in its series of interactive webinars aimed at building stronger connections between local civil society organisations and international human rights instruments and exploring how these instruments can be applied to protect the rights of detained refugees and migrants.

Examining the Optional Protocol to the Convention Against Torture (OPCAT), this webinar explored the role of the OPCAT bodies—the Subcommittee on Prevention of Torture and other Cruel, Inhuman or Degrading Treatment or Punishment (SPT) and National Preventive Mechanisms (NPMs). Focusing on their unique structure and mandate, the webinar delved into the bodies’ pivotal roles in preventing torture and ill-treatment in immigration detention. Moderated by Veronica Filippeschi (Association for the Prevention of Torture), the event benefitted from the insight of eight speakers who provided first hand experiences of implementing the OPCAT mandate around the world.

During the first part of the session, we welcomed Sir Malcolm Evans, former Chairperson of the SPT and Professor of International Public Law at the University of Bristol, and Hindpal Singh Bhui, Inspection Team Leader at the UK Inspectorate of Prisons. Among various issues explored by the speakers were the functions of the OPCAT treaty mechanism, the distinctive roles of the SPT and NPMs, challenges associated with their work, and the vital role of civil society organisations in supporting the OPCAT bodies’ work. Sir Malcolm Evans said: “I want to highlight the vital work that civil society does – critical for those in detention but also a source of information for bodies such as the SPT and NPMs and for following up recommendations and continuing oversight through awareness raising and advocacy for change.”

Offering his thoughts, Marko Anojčic, Serbia Ombudsperson, said: “CSOs provide us with important information about the situation in different places of detention under the NPM mandate. NPMs cannot be everywhere and cannot know everything that is happening in the field. … So my advice to CSOs is to find your national NPM, write to them, engage with them, be proactive and initiate a meeting and present to them the issues that you consider problems.”

Watch a recording of the webinar HERE (Passcode: MGBu4#2b)

“Subcommittee on the Prevention of Torture” – OHCHR

“Be Careful What You Wish For,” Michael Flynn, Forced Migration Review, 2013

“The UN Committee on Migrant Workers as a Venue for Protecting the Rights of Migrant Detainees: A GDP Briefing with CMW Member Pablo Ceriani”

“The UN Working Group on Arbitrary Detention as a Venue for Challenging Arbitrary Immigration Detention: A GDP Briefing with Elina Steinerte”