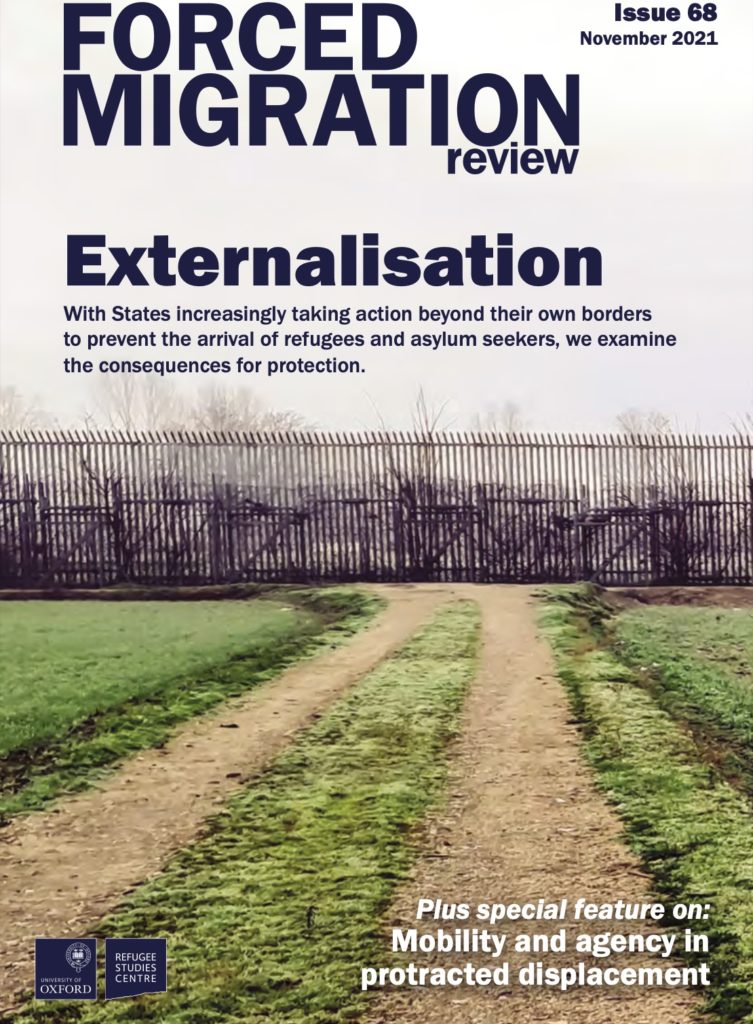 In Forced Migration Review issue 68’s main feature on Externalisation, authors examine the consequences for protection when states increasingly take action beyond their own borders to prevent the arrival of refugees and asylum seekers, including an article by the GDP’s Michael Flynn on how the efforts of wealthy countries to externalise migration and asylum controls have spurred the emergence of new detention systems in numerous countries across the globe, many of which lack basic safeguards, monitoring practices, or the rule of law. Access to all the contributions is available on FMR’s website, here.

Externalisation of international protection: UNHCR’s perspective
Madeline Garlick
In recent years, some States have pursued increasingly restrictive policies and practices in order to deter refugees and asylum seekers from reaching their borders. Such policies of ‘externalisation’ are manifestly inconsistent with the spirit of international cooperation embodied in the 1951 Refugee Convention.

Conceptualising externalisation: still fit for purpose?
Nikolas Feith Tan
Given the proliferation of externalisation policies in recent years, there needs to be greater clarity around the term ‘externalisation’: what it means, what it comprises, and implications under international law.

Why resettlement quotas cannot replace asylum systems
Bernd Parusel
Resettlement is an important element of refugee protection worldwide. However, it is fundamentally different from territorial asylum systems. Resettlement should complement the reception of asylum seekers but should never replace it.

Pushbacks on the Balkan route: a hallmark of EU border externalisation
Gigi Aulsebrook, Natalie Gruber and Melissa Pawson
Illegal pushbacks – and the use of violence – on Europe’s borders have increased to unprecedented levels, raising the alarm about abuses of fundamental human rights.

Extraterritorial asylum processing: the Libya-Niger Emergency Transit Mechanism
Laura Lambert
The Libya-Niger Emergency Transit Mechanism launched in 2017 successfully evacuated a large number of asylum seekers detained in Libya. However, the outcomes for many of the asylum seekers, and indeed for the three main partners (UNHCR, the EU and Niger), were far from what they had hoped for.

Lessons from Australia’s Pacific Solution
Neha Prasad
Nine years after it was first implemented, Australia’s ‘Pacific Solution’ has not proven to be the promised panacea. Any country or region hoping to emulate the Australian offshore framework should be wary of its legal, ethical and operational failings.

Expanding Canada’s borders
Claire Ellis, Idil Atak and Zainab Abu Alrob
Although Canada enjoys a good international reputation for its refugee resettlement programmes, it has also externalised refugee protection under the pretext of preserving the integrity of its asylum system and responsibility sharing.

Denmark’s new externalisation law: motives and consequences
Martin Lemberg-Pedersen, Zachary Whyte and Ahlam Chemlali
A new law in Denmark, which could ultimately end the integration of refugees on Danish territory, offers important lessons about contemporary externalisation policies and the political motives behind them.

US remote health controls: the past and present of externalisation
David Scott FitzGerald
Measures to control asylum seekers’ entry to US territory during the COVID-19 pandemic reflect a long history of remote border controls.

Eyes in the sky: European aerial surveillance
Angela Smith
Since 2017, aerial surveillance has become central to EU attempts to identify, deter and return intercepted migrants to Libya. As a result, struggles between the EU and civil society rescue actors have also shifted from the seas to the skies.