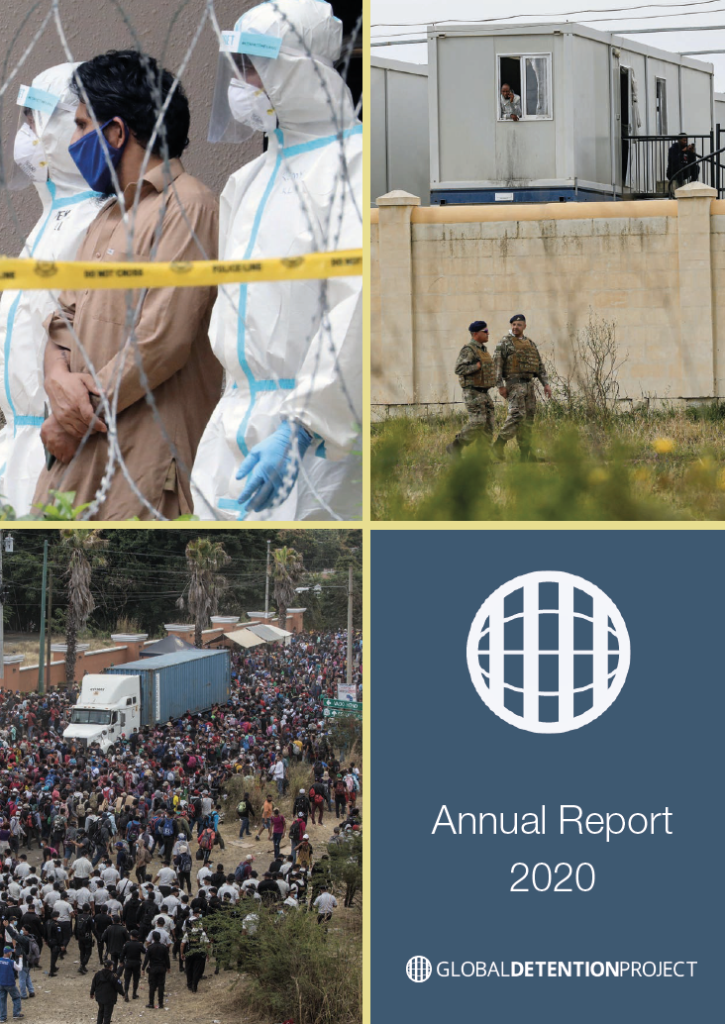 From the Executive Director and President

As we look back at 2020, the dramatic impact of COVID-19 on the lives of migrants, asylum seekers, refugees, and other vulnerable non-citizens across the globe appears to overshadow all else, and thus there is the temptation to narrowly focus our attention on what we did to respond to this unprecedented global crisis. But this Annual Report reveals that even as we sought to steady the GDP ship through this storm, we managed to make important advancements in our core objectives and outputs and—where necessary—to make course corrections (some temporary, some longer term) in our operations and strategies.

Key results last year included: the establishment of new partnerships with organisations operating across Africa, the Middle East, and Asia, who are a cornerstone of the data-driven advocacy work employing the GDP’s online database, the Global Immigration Detention Observatory; the publication of our book Immigration Detention in the European Union: In the Shadow of the “Crisis” (Springer 2020), whose release was immediately eclipsed by the onset of the pandemic but which nevertheless quickly became a must-read on human rights and the evolution of immigration detention; the launch of a re-designed website that aims to increase the impact of our ever-deepening dataset on immigration detention systems; and completion of more than two dozen country detention profiles and submissions to human rights monitoring bodies, covering every region of the world.

Some activities, however, inevitably faced setbacks. Important among these were planned advocacy trips by partners and our interactions with UN treaty bodies, whose operations were greatly curtailed because of the pandemic. Also, crucially, just as the pandemic began its inexorable surge last March, the GDP was on the verge of launching a new Strategic Plan to replace the four-year plan that ended in 2019, which had steered us in our transformation from academic project to civil society organisation. But it quickly became obvious, even in those initial days and weeks, that things would not be returning to normal any time soon, and that some things perhaps never would. Thus, in consultation with members of our Executive Committee, we made the decision to delay launching a new plan until we could observe more clearly the impact of COVID-19 and determine how to adapt our work to meet these unexpected challenges … and also to take advantage of possible unexpected opportunities. In the interim, we agreed to temporarily extend the life of our previous plan, which has been such a steady guide for us.

A critical insight that seized our attention when the pandemic hit was that it would—or should—pose fundamental questions about immigration detention regimes. How would countries justify keeping this vulnerable population behind bars as the health implications—for detainees, their jailors, and the communities in which detention centres are located—became increasingly clear? With the reason for many detention orders—deportation—made impossible by the pandemic, we also knew that there would be growing legal challenges to keeping people in detention. Thus, we realised that the pandemic may provide new opportunities to challenge detention even as the shadow of COVID-19 grew: border closures left people precariously isolated in remote regions, often crammed into hastily set up camps; officials increasingly blamed, without evidence, migrants and refugees for spreading the virus; asylum seekers were locked inside shelters and reception centres, in some cases indefinitely, as a public health measure; and the virus spread dramatically in immigration detention centres in many countries.

Faced with this quickly developing crisis, and unable to pursue many of our planned activities with UN human rights bodies, we launched from scratch an entirely new project: The COVID-19 Global Immigration Detention Platform. As of mid-March 2021, nearly a year to the date after we launched the platform, we had published more than 400 entries covering almost every country on the globe. The platform, which has been widely cited in press accounts, is being used by medical associations, UN bodies, academics, NGOs, journalists, and migrants as a source for understanding how the pandemic has impacted the treatment of migrants, refugees, and asylum seekers everywhere.

As you will read in this report, the operations of our COVID platform—together with our ability to create it quickly and efficiently—have taught us valuable lessons about the importance of our work in challenging abusive detention practises and the growing necessity of being agile in the face of a world that seems more precarious, more prone to calamity, and more unexpected than ever before.