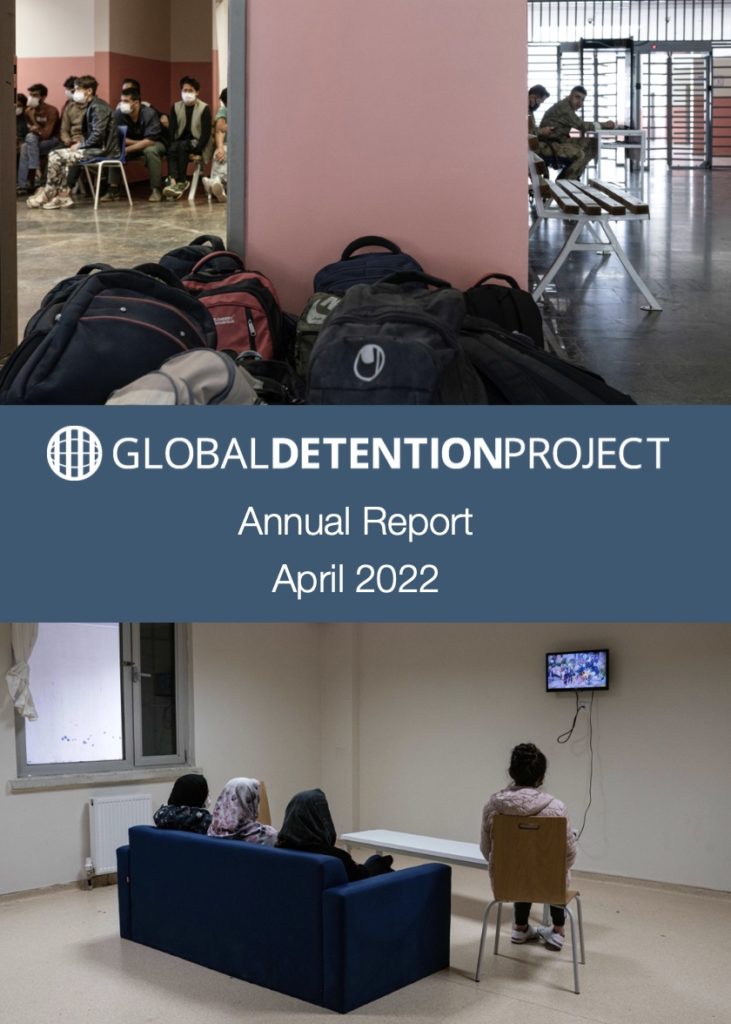 From the Executive Director & President

When we began drafting this Annual Report, Russia’s unprovoked invasion of Ukraine had already driven millions of people into neighbouring countries, spurring the largest refugee emergency in Europe since World War II. As we looked back on 2021—a year during which the COVID-19 pandemic, cruel border control practices, and burgeoning conflicts from Yemen to Myanmar to Afghanistan all had devastating impacts on migrants and refugees—it was hard to imagine that yet another calamity awaited around the corner that would upend our collective sense of security and well-being, and create dramatic new challenges in our efforts to promote the human rights of detained non-citizens. But just as the COVID-19 pandemic revealed important lessons about the harm caused by migration-related detention, so too has the war in Ukraine placed a spotlight on a darker side of our humanitarianism.

It was not so long ago that Europe faced another critical refugee challenge, the 2015 “crisis” spurred by the conflict in Syria. However, the starkly different responses we have witnessed thus far to the 2015 Syrian refugee exodus and the 2022 Ukrainian one provides a sobering lesson. The case of Hungary is particularly telling: While Prime Minister Victor Orbán has said that every refugee coming from Ukraine will be “welcomed by friends in Hungary,” he has continued to denigrate non-EU refugees, arguing on national TV that one doesn’t have to be a “rocket scientist” to see the difference between “masses arriving from Muslim regions” and Ukrainian refugees. Hungary has refused to admit refugees from non-EU countries since 2015 and its detention practices have been ruled illegal by the European Court of Justice.

But Hungary has not been alone in its harsh response to refugees who come from countries in Africa, the Middle East, or Asia. In our book Immigration Detention in the European Union: In the Shadow of the “Crisis” (Springer 2020), we detail the evolution of the detention systems of all EU Members States before, during, and after the 2015 Syrian refugee crisis. Among our key findings: During the years leading up to 2015, migration-related detention had largely plateaued across the EU, but the “crisis” spurred increases in detention across the entire region, which largely remain in place today. Fuelling these increases was anti-migrant rhetoric that spread from Brussels across the continent, abetted by EU-wide migration directives that allowed for lengthy detention periods.

Importantly, while the EU argued in 2015 that all arriving refugees could be detained for up to 18 months, there are no such pronouncements from Brussels today. This is a welcome change, but one which raises questions about Europe’s double standards in the treatment of refugees.

As you will read in this Annual Report, the GDP has sought to engage the numerous challenges of the past year proactively, effectively, and in partnership with allies and advocates at all levels, from local advocacy groups to networks spread across the international community. A common thread that ties our work together over the past year is our effort to ensure that global tools have local impact.

We have sought to achieve this in part by bolstering our staff with seasoned advocates—including a former detainee and award-winning human-rights defender Abdul Aziz Muhamat and an experienced refugee advocate Rachael Reilly, both of whom have played important roles during 2021 engaging human rights agencies and tying our work more closely to on-the-ground needs and realities.

Among our notable achievements, which you will read about in this report:

• The launching of a new interactive webinar series introducing local activists to international human rights tools that can assist them in preventing arbitrary detention;

• Producing the world’s only comprehensive survey of national responses to the COVID-19 pandemic with respect to detained migrants, asylum seeks, and refugees;

• Developing new partnerships with NGO networks and UN agencies, including notably the World Health Organisation, which invited the GDP to produce a chapter on detention for its first ever global report on health and migration and an evidence review of health indicators in detention;

• Mobilizing key actors in both regional and UN human rights systems to directly address urgent situations, including notably the plight of migrants and refugees trapped in the border regions between Belarus and neighbouring EU countries; and the deportation of refugees from abysmal detention centres in Egypt to life- threatening situations in Eritrea.

We have achieved all of this—and much more—with our small but remarkably effective team and in the face of an ever more-complicated funding environment. Today, more than ever, there are crucial human rights challenges facing migrants, asylum seekers, and refugees that require attention and resources. The GDP’s work promoting the human rights of detainees remains as relevant as ever, and our ability to make an impact has grown in the face of each new challenge and calamity.