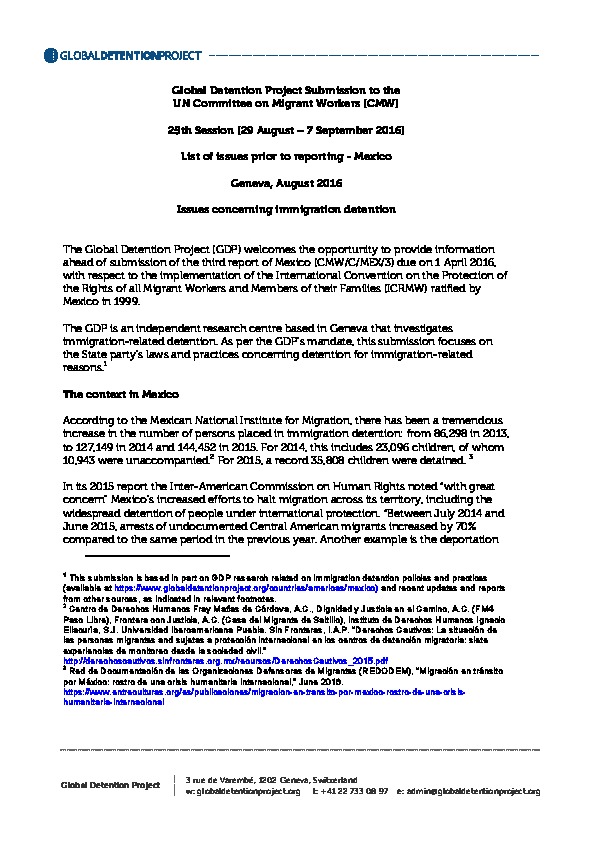 The Global Detention Project (GDP) welcomes the opportunity to provide information ahead of submission of the third report of Mexico (CMW/C/MEX/3) due on 1 April 2016, with respect to the implementation of the International Convention on the Protection of the Rights of all Migrant Workers and Members of their Families (ICRMW) ratified by Mexico in 1999.

The context in Mexico

In its 2015 report the Inter-American Commission on Human Rights noted “with great concern” Mexico’s increased efforts to halt migration across its territory, including the widespread detention of people under international protection. “Between July 2014 and June 2015, arrests of undocumented Central American migrants increased by 70% compared to the same period in the previous year. Another example is the deportation of migrant children from Mexico, which increased from 4,015 during 2011 to 12,511 between January and June, 2015, which is equivalent to an average of 2,085 deported children per month. It is worth noting that the deportation of migrants, particularly of children and adolescents entails their previous detention which can be prolonged for a long time. After the launch of the Southern Border Program [in 2014], Mexico is currently detaining and deporting more Central American migrants than the United States, reversing the historical trend. Also, civil society organizations informed the Commission that after the launch of the Southern Border Program (PIFS, Programa Integral de la Frontera Sur), crimes and abuses against migrants, asylum-seekers and refugees have increased.”[4]

Main issues: Publicly available statistics for the number of migrants detained annually since examination of the 2nd periodic report of Mexico indicate a very steep rise. Can authorities explain why?

As the GDP has reported, the official language used in Mexican law and policy to characterize immigration detention is arcane and misleading. A case in point are the relevant articles providing for detention measures in the 2011 Migration Law. For instance, Article 99, which summarizes the key grounds for detention, fails to mention any word or concept relating to detention, confinement, or deprivation of liberty. Instead, the article provides that foreigners are to be “presented” at “migratory stations” while their situation is being determined (“Es de orden público la presentación de los extranjeros en estaciones migratorias o en lugares habilitados para ello, en tanto se determina su situación migratoria en territorio nacional.”)

In providing the grounds for detention, Article 99 introduces another euphemism to refer to deprivation of liberty, alojamiento, or “accommodation” (before the adoption of the 2011 Migration Law, official discourse in Mexico tended to refer to the detention of immigrants as aseguramiento, literally translated as “assurance” or “guarantee”). The article states that foreigners are to be “temporarily accommodated” (alojamiento temporal) in order to assist the process of “regularizing” their stay in the country or to assist their “return” (retorno). According to the joint civil society 2015 “Derechos cautivos” report euphemistic language has expanded since 2014 so that actual apprehensions for detention are frequently called “rescue operations” (operativos de rescate).

According to civil society and academic experts, “The Mexican government’s refusal to recognize the detention of migrants as such and its insistence on using euphemistic terms puts detained migrants in legal limbo. Because they are not technically detained, migrants do not enjoy the same rights as detained persons, namely access to legal representation, however, they are deprived of their liberty.”[5]

The issue of the consequences of lack of transparency has been addressed by authoritative bodies in otherworld regions. In 2009, the European Committee for the Prevention of Torture urged officials of Turkey to consider adopting the term “detention centres” “rather than the misleading euphemism ‘guest houses,’ since the persons held in these centres are undoubtedly deprived of their liberty.” Following this Turkey eventually changed its language in subsequent legislation.

Detention of children: As mentioned above, in 2014 23,096 children were placed in immigration detention across Mexico, of whom 10,943 were unaccompanied. Further many reports indicate that conditions of detentions are severely inadequate.

In 2011, the CMW made a series of recommendations to Mexico to ensure that detention of children should only be used as a last resort and for the shortest possible time and for protection of unaccompanied minors and best interest of the child determination.

Main issues: Can Mexico explain why so many children are placed in immigration detention? Are children separated from unrelated adults in detention centres? What are the alternatives to detention? Please provide indications as to the legal basis for alternatives and data about their use for children.

Prolonged detention for challenging detention and/or lodging an asylum claim: In its 2011 Concluding Observations (§ 35 and 36)[6] the CMW expressed concern about prolonged detention of migrants held in holding centres who lodged appeals or wanted to claim asylum. CMW also recommended that Mexico limit the detention of migrants to the shortest time possible. According to recent information, this remains a problem and children were reportedly warned by INM agents that applying for recognition or against adverse decisions would result in protracted detention (at time for up to six months or more). Another consequence is that families and children then hesitate to lodge these applications. [7]

Does prolonged detention while appeals or asylum requests are processed still prevail? Is this a state policy? If so what are the legal bases for this practice and what is the legal time limit? What steps are the authorities taking to allow immigration detainees to exert their rights to lodge appeals and apply for asylum without risking longer detention?

Conditions in detention: There are numerous reports of overcrowding in main detention centres and reports of cells without bedding and poor hygiene. Many centres also reportedly include isolation cells (“calabozos”) for punishment, including for minors.[8] Other reports include testimonies from detained migrants about verbal, physical or sexual abuse.[9]

Main issues: What steps are the authorities taking to improve detention conditions? Have there been cases of immigration detention and security staff sanctioned for abuse of detainees?

According to GDP research, the Migration Law appears to be unclear with respect to whether detention measures are mandatory in some cases. The vague language used in Article 99 seems to indicate that anyone whose status is unclear or who is subject to deportation must be (es de orden público) “presented” at a detention centre operated by the National Migration Institute. However, experts consulted by the Global Detention Project provided divergent views on the matter.

When asked whether Article 99 provided for mandatory detention in 2012, Fernando Batista, the relevant authority on immigration detention at Mexico’s quasi-governmental National Commission on Human Rights (CNDH), failed to directly address the question, instead explaining that “Mexican legislation establishes certain requirements, depending on the nationality of the person in question, for entering our country. People who fail to comply with these requirements can incur an administrative infraction, based on which they can be submitted to the National Migration Institute while their situation is being determined.”

In contrast, Lorena Cano of the non-governmental group Sin Fronteras told the Global Detention Project in 2013, “The tendency, in effect, is to detain all irregular migrants and asylum seekers, with the of exception of ‘cases of vulnerability.’”

Main issue: Is detention of migrants in an irregular situation mandatory?

Length of detention and indefinite detention. Article 111 of the Migration Law establishes that the initial period of administrative confinement for non-citizens cannot exceed 15 working days. This can be extended for an additional 60 working days in certain cases. However, when a detainee appeals rulings on their migratory status, the law appears to provide for indefinite detention. Article 111 states that the 60-day maximum is to be applied only in cases where migrants cannot prove their identity, their consulate cannot provide them travel documents, the conditions of travel are not suitable, and/or if they are not physically able to travel.

According to Batista of CNDH (see above), in cases where a detainee has made an appeal, the time in detention “can be extended until the case is resolved by judicial power.” Similarly, Cano of Sin Fronteras told the Global Detention Project, “In effect, a person who presents an appeal can remain in detention indefinitely according to the law. We are currently assisting the appeal of a person who has already been in detention for seven months.”

Main issue: What is the time-limit for immigration detention in law, and in practice?

Monitoring: Monitoring of places of deprivation of liberty, including immigration detention centres is a basic tenet for ensuring respect for the human rights of and guarantee protection.

According to civil society and academic research, adoption of the Southern Border Programme (Programa Integral de la Frontera Sur) following negotiations between the United States and Mexico, Guatemala, El Salvador and Honduras, has resulted in an increase in detention[10]. “From July 2014 to June 2015 detention rose 73% compared to the same period in the previous year.” [11] In its 2015 report on Mexico, the Inter-American Commission on Human Rights expressed “its deep concern that the actions implemented by the Mexican State under the Southern Border Program does not correspond with the State’s international obligations on human rights nor with the protection challenges posed by this protracted crisis affecting hundreds of thousands of migrants, asylum-seekers and refugees, originating mostly from the Northern Triangle countries.” There have also been that U.S. officials have been present in Mexican detention centres and that the United States has provided financial assistance to Mexico for its detention and deportation efforts.

Main issues: Is there a publicly available document detailing operations under the plan, including safeguards for protection of the rights of migrants? Can Mexico provide information about U.S. government assistance in Mexican immigration control efforts, including any financial assistance the United States may have provided Mexico to prevent migrants fro transiting Mexican territory?

[1] This submission is based in part on GDP research related on immigration detention policies and practices (available at https://www.globaldetentionproject.org/countries/americas/mexico) and recent updates and reports from other sources, as indicated in relevant footnotes.

[6] Committee on Migrant Workers, “Concluding observations of the Committee on the Protection of the Rights of all Migrant Workers and Members of their Families – Mexico,” CMW/C/MEX/CO/”, 3 May 2011. http://tbinternet.ohchr.org/_layouts/treatybodyexternal/SessionDetails1.aspx?SessionID=405&Lang=en