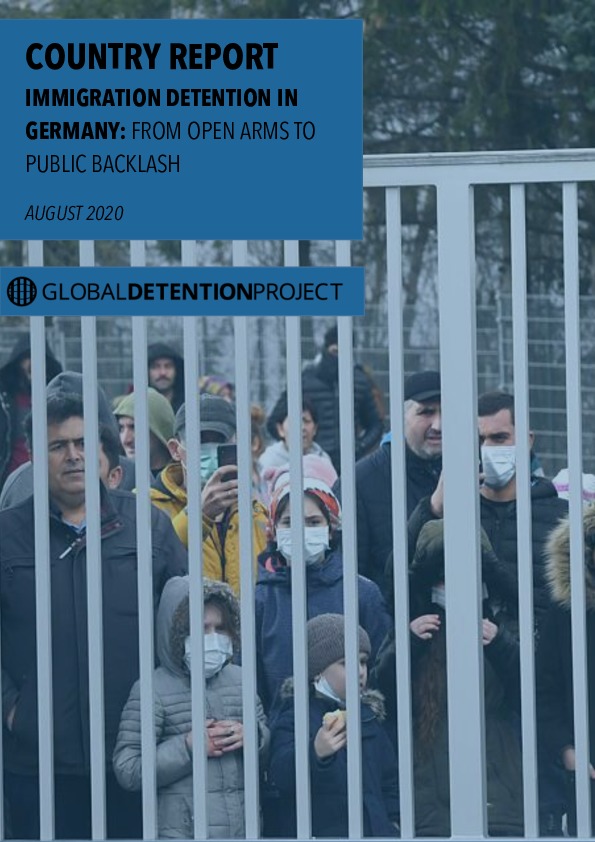 During the height of Europe’s migration “crisis,” Germany was one of the few EU countries to openly embrace assisting refugees, registering more than a million arrivals in less than two years. However, this stance spurred a public backlash, which led to the adoption of a host of restrictive measures, including policies intended to increase removals, limit family reunifications, and expand the range of facilities that can be used to detain migrants—including prisons. Even during the Covid-19 crisis, authorities stressed that when possible, returns should continue to be carried out, ignoring UN advice warning against deportations during the pandemic.

A main destination for asylum seekers and migrants in the EU, Germany has received the highest number of asylum seekers in the EU since 2012. The country also apprehends and returns among the highest numbers of non-citizens annually in Europe: in 2019, a total of 25,140 third-country nationals were returned following an order to leave. After the initial onset of the refugee “crisis” in 2015, the country adopted a welcoming posture to refugees. That year, the country took in approximately 890,000 refugees and asylum seekers and Chancellor Angela Merkel declared that Syrian refugees were welcome to stay—regardless of where they had first entered the EU.

Since then, however, the country has pursued more restrictive measures, in part due to the fact that migration has become a top political issue amongst many Germans—and a particular focus for the far right. Measures have included increased rates of deportations to Afghanistan; new limitations on family reunion; plans to set up shelters for returned children in Morocco; and the resumption of returns to Greece under the EU Dublin Regulation.

This resumption of returns to Greece in 2017 was soon followed by other efforts to increase removals, including the launch of a controversial campaign by the Interior Ministry featuring posters encouraging non-nationals to return to their country of origin by promising to pay each returnee a years’ worth of rent. In 2019, the country adopted the Orderly Return Law, which was aimed at increasing the number of returns. The law also introduced several restrictive amendments to Germany’s migration and asylum legislation—including a new form of immigration detention, expanding the notion of the risk of absconding, and re-introducing the option for authorities to place non-citizens in prisons as an emergency measure until 2022.

The re-introduction of the option for non-citizens to be placed in prisons was a significant about-face. Until 2014, the country had been one of a small handful of European states using prisons for the purposes of immigration detention. However, following the EU’s Court of Justice (CJEU) ruling in Bero & Bouzalmate—in which the court ruled that Germany could not rely on the fact that there were no dedicated detention facilities in some of its federal states to justify holding non-citizens in prisons pending their removal—Germany was obliged to establish procedures enabling federal states without dedicated detention centres to place non-nationals in specialised facilities in other states.

Since September 2018, Germany has operated 11 dedicated long-term immigration detentions in nine federal states. In 2018, Germany also established specific centres (Arrival, Decision and Municipal Distribution or Return Centres, or “AnkEr Centres”) in several federal states to accommodate asylum seekers during their asylum procedures and which—because of relevant authorities and actors being concentrated in the centre—allow asylum procedures to be accelerated and linked with return procedures. Although those held in these facilities are permitted to exit the facility, according to the UN Committee against Torture (CAT), their isolated locations and the subsequent difficulty asylum seekers face in accessing medical and social services elsewhere results in residents facing enormous restrictions upon their liberty.

Despite the restrictive measures taken at the federal level and growing negative attitudes towards migrants and asylum seekers, there have continued to be progressive actions from officials, individuals, and civil society groups. In 2018, for example, German pilots prevented the deportation of 506 people—having previously prevented the deportation of 314 in 2017, and 139 in 2016. More recently, in January 2020 a coalition of dozens of municipalities (the “Cities of Safe Harbours Initiative”) demanded that federal government resettle refugees and migrants rescued from the Mediterranean Sea or stranded in Greece or Italy. The municipalities—which included the cities of Potsdam and Düsseldorf—declared that they were ready to take in more people if the government were to allow it.

Previously, several states had made similar demands for refugee children stranded in Greece, and the state of Thuringia had even voiced hopes to take in children even if the federal government were to refuse such relocations. In April 2020, 47 unaccompanied children were flown from Greece to Germany—a move which was both welcomed and criticised given the paltry number to be evacuated. This news was followed by an announcement by Germany’s Interior Minister in June 2020 that an additional 249 children had been flown to Germany. In July, the German government reported that federal states were willing to take in at least 2,100 refugees from Greek islands under a federal relocation agreement.

Unlike some European countries such as Spain (which prohibited detention of over 60 days prior to deportation), Germany did not introduce a moratorium on new detention orders during the Covid-19 pandemic. However, reports indicate that many immigration detainees were released from detention facilities and some centres were reportedly emptied. According to civil society groups, people who were released were commonly transferred to asylum reception centres where they were required to remain. Meanwhile, although authorities temporarily suspended Dublin Transfers to and from all EU member states, in a 25 March Federal Interior Ministry procedural note, the government stressed that whenever possible returns should continue to be carried out.