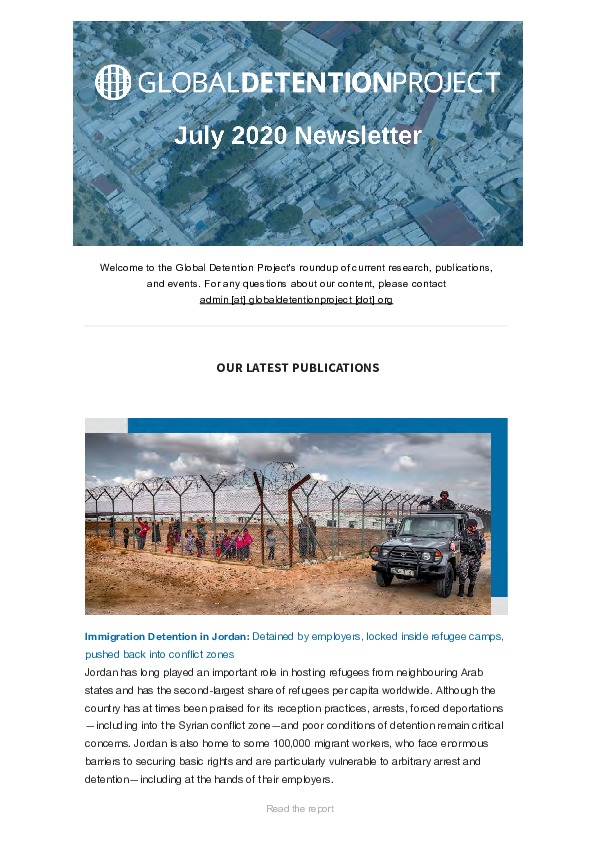 Immigration Detention in Jordan: Detained by employers, locked inside refugee camps, pushed back into conflict zones

Jordan has long played an important role in hosting refugees from neighbouring Arab states and has the second-largest share of refugees per capita worldwide. Although the country has at times been praised for its reception practices, arrests, forced deportations—including into the Syrian conflict zone—and poor conditions of detention remain critical concerns. Jordan is also home to some 100,000 migrant workers, who face enormous barriers to securing basic rights and are particularly vulnerable to arbitrary arrest and detention—including at the hands of their employers. Read the full report.

Reports from international organisations and other observers indicate that Algeria has, during the past decade, employed increasingly punitive methods to limit the entry and stay of refugees, asylum seekers, and undocumented migrants. There have been frequent accusations of arrests based on racial profiling, as well as reports of arbitrary detention and pushbacks across the country’s southern border, which have reportedly continued since onset of the Covid-19 pandemic. Read the full report.

Submissions to the Universal Periodic Review: Oman and Lebanon

Ahead of the 37th session of the Universal Periodic Review (UPR) working group, the GDP submitted information pertaining to immigration detention practices in Oman (submitted jointly with Migrant-Rights.org) and Lebanon. Key issues that were raised included Lebanon’s apprehension and deportation of Syrian refugees during the Covid-19 pandemic; and continued passport confiscations by employers in Oman, despite the introduction of legislation prohibiting this. Read the submissions.

Since launching our Covid-19 Global Immigration Detention Platform in April, the GDP has posted more than 240 updates covering 105 countries, documenting how states are responding to this ground-shifting pandemic vis-à-vis migration-related detainees. Much of this information has been gleaned from our multilingual Covid-19 detention survey, which is available online and which we sent directly to relevant government agencies around the world, as well as national ombudsperson offices, National Preventive Mechanisms, national and regional offices of the UN High Commissioner for Refugees, the UN Office of the High Commissioner for Human Rights, and the International Organisation for Migration. To date, we have received survey responses from 12 government agencies, 19 ombudsperson offices and NPMs, and 34 international organisations and NGOs. To receive weekly updates detailing our latest monitoring posts, sign up to our Covid-19 newsletter here.

UNHCR has released a statement urging countries to cease the unlawful detention of migrants and refugees amidst the Covid-19 pandemic. Referring to reports that many countries are using lengthy quarantine measures to justify the prolonged detention of non-nationals, the refugee agency said, “Refugees fleeing war and persecution should not be punished or criminalized simply for exercising their fundamental human right to seek asylum. … Measures to tackle COVID19 do not justify arbitrarily detaining them on arrival, which not only worsens the misery of people who have already suffered, but also undermines efforts to limit the spread of the virus.” Read statement here.

Even as the “refugee crisis” began to recede from the borders of many European countries and as detections of unauthorised border crossings into the EU declined, authorities in many European states have been adopting increasingly restrictive border and detention policies. Authored by the GDP’s Izabella Majcher, Michael Flynn, and Mariette Grange, Immigration Detention in the European Union: In the Shadow of the “Crisis” offers a unique comparative assessment of the evolution of immigration detention systems in European Union member states since the onset of the “crisis.” For more information—or to buy a copy—click here.

“Refugees and the Misuse of Criminal Law,” Y.S. Holiday in: Causes and Consequences of Migrant Criminalization, N.K. Šalamon (ed), Springer.

“Evaluations of Return Within a Mass Deportation: Ethiopians’ Experiences of Return After Expulsion From Saudi Arabia,” K. Kuschminder, Z. Ogahara, and I. Rajabzadeh, International Migration, July 2020.

“The Detention of Migrant Children: A Comparative Study of the United States and Mexico,” J.J. Lee and E.O. Velázquez, International Journal of Refugee Law, July 2020.

“Bordering the Surplus Population Across the Mediterranean: Imperialism and Unfree Labour in Libya and the Italian Countryside,” L. Pradella and R. Cillo, Geoforum, July 2020.