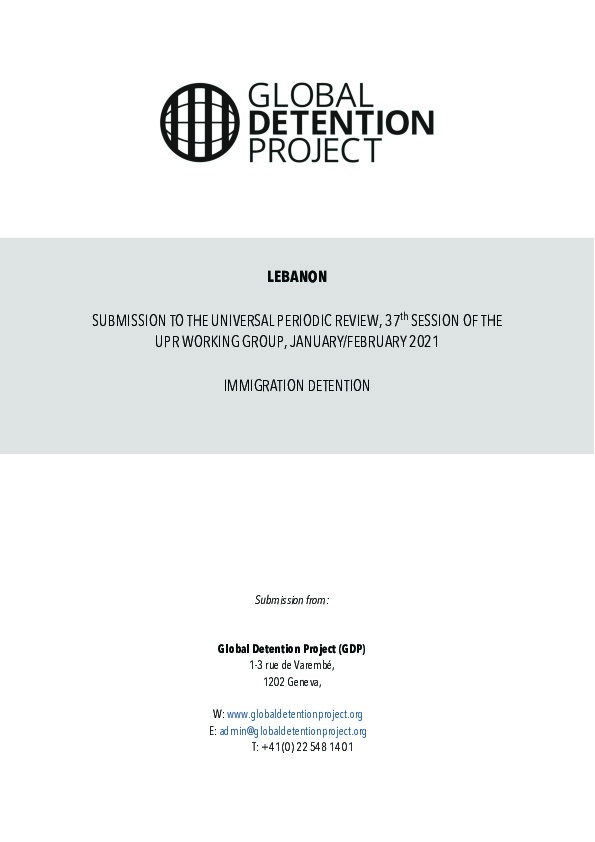 This submission focuses on human rights concerns relating to Lebanon’s policies on the detention of migrants, refugees, and asylum seekers.

1.1.1 Lebanon boasts the highest per-capita concentration of refugees in the world. With more than 1.5 million Syrians and Palestinians living inside its borders, refugees make up some 30 percent of the country’s population. The vast majority live below the poverty line and reside amongst the population in makeshift accommodation.

1.1.2 Since Syrian refugees first began arriving in Lebanon in 2011, the country has increasingly treated this population as both a security threat and an economic burden. Many have found themselves under growing surveillance. In 2015, authorities introduced restrictive visa regulations, which left most Syrians unable to enter Lebanon legally. Additional residency fees were introduced for those wishing to remain in the country, including for those registered with UNHCR and those with a Lebanese sponsor. This policy stipulated that renewal fees had to be paid every six months, and that additional pledges and documents, which needed to be signed by a public notary, were also required.[i] In May 2015, the Lebanese government also instructed the UN High Commissioner for Refugees (UNHCR) to stop registering new arrivals as “refugees.”[ii]

1.1.3 As a consequence of these measures, approximately 60 percent of Syrians over the age of 15 lost their legal status in the country, leaving them acutely vulnerable. Although a decision was made in February 2017 to lift the residency renewal fee, a large number of refugees remain excluded, including all Syrians who are not registered with UNHCR and all Palestinians from Syria. Today, an estimated 73 percent of Syrian refugees in the country lack legal status, limiting their access to essential services including health care and livelihood opportunities, and rendering them vulnerable to arrest and detention.

1.1.4 As per a decision by the Supreme Defence Council on 15 April 2019 and a decision by the General Director of the General Security issued on 13 May 2019, persons who entered Lebanon irregularly after 24 April 2019 could be forcibly deported without respect for due process. According to the National News Agency, some 2,731 Syrians were forcibly deported to Syria between 21 May and 28 August 2019 based on these decisions.[iii] However, according to rights groups, the decisions of both the Supreme Defense Council and the General Security violate Lebanon’s constitution, Lebanese laws, and international conventions in that they allow deportations to be issued and executed without verification of the risks the individual may face upon return and without granting non-nationals the right to challenge their deportation within a Lebanese court.[iv] According to Human Rights Watch, at least three of those deported during this period were subsequently detained by Syrian authorities.[v]

1.1.5 More recently, the Covid-19 pandemic has exposed the barriers—and risks—that refugees face within the country. Many with irregular status have cited fears of accessing medical services—including testing and treatment—during the crisis for fear of reprisals, including detention and deportation, should their irregular status be reported.[vi] At the height of the pandemic in March and April 2020, multiple municipalities introduced discriminatory restrictions on Syrian refugees that did not apply to Lebanese citizens—including curfews restricting refugees’ freedom of movement.[vii] Some municipalities (particularly those affiliated to political parties that oppose the presence of Syrian refugees) deported Syrians under the pretext of combatting the virus, including several families who were removed after purchasing medicine. At least nine refugee camps were also raided by security forces, who demanded registration papers and residency permits.[viii]

1.1.6 While there is a legal basis for the administrative detention of non-citizens, the legal framework is unclear and inadequate, resulting in arbitrary detention. Many face prolonged pre-trial detention, are forced to remain in detention after completing sentences for criminal convictions, and are not granted access to procedural safeguards to ensure a fair trial. Reports indicate that refugees are often arrested when trying to renew their residence permits, during routine or checkpoint controls, or during raids led by the Lebanese army at unofficial refugee camps. In many cases, General Security, which is restricted to Articles 17 and 18 of the Law on Entry and Exit, detains non-citizens without referring them to the public prosecutor or courts for due process.[ix]

1.2.1 Lebanon is also home to an estimated 250,000 migrant domestic workers from countries such as the Philippines, Ethiopia, and Kenya. Lebanon, however, is not a party to the International Convention on the Protection of the Rights of all Migrant Workers and Members of their Families (CMW). The country’s Labour Code continues to exclude domestic workers—both foreign and Lebanese—from its provisions, and instead subjects them to the kafala system. This leaves many migrant domestic workers tied to their employer, with many experiencing abusive situations such as passport confiscation, movement restrictions, harassment, physical and sexual abuse, and long working hours with minimal, or no, payment.

1.2.2 Employers, who are responsible for securing the migrant workers’ work permit and whose name is marked in the migrant worker’s passport, reportedly generally demand that workers hand over their passports upon arrival. There is no legislation in place criminalising passport confiscation, and migrant domestic workers whose employers withhold their passports are liable to arrest and detention for illegal stay should they try to change employer or flee their employment. In some cases, they have been detained for months.[x] (Lebanon’s Interior Ministery says that it has prepared a draft amended labour law that extends protections to migrant domestic workers but reforms do not appear to have been adopted yet.)[xi]

1.2.3 During Covid-19-related lockdowns, reports of abuse have increased,[xii] and many households have prevented workers from leaving the house altogether[xiii]—a situation that amounts to de facto detention. De facto deprivation of liberty at the hands of private individuals was recognised and noted by the Working Group on Arbitrary Detention in its preliminary findings following a 2019 visit to Qatar, where migrant domestic workers are similarly excluded from labour laws and where many are prevented from leaving their employers.[xiv]

1.2.4 With Lebanon’s economy in crisis, scores of employers have forced migrant domestic workers onto the street. As of 1 July, a dozen Ethiopian workers were camped out outside their Consulate in Beirut, hoping that their own government would help them return home.[xv]

1.3.1 Until 2016, Lebanon operated a dedicated immigration detention facility in Adlieh, located in a former parking lot under a highway connecting Badaro to Baabda. The conditions in this facility were repeatedly flagged by rights observers as unacceptable, including severe overcrowding and lack of ventilation.[xvi] However, in August 2016 this facility was closed and relocated to Beirut’s Al Abed Square—the location of General Security’s headquarters. According to the General Security’s media office, the new detention facility is above ground, and is larger and more hygienic than the original centre. The facility also reportedly includes a health clinic, library, and craft room, but the GDP remains unclear as to what extent detainees have access to these facilities. Civil society actors also highlight that the government only provides food to immigration detainees, and that sanitary, medical, and other services remain provided by families, NGOs, and humanitarian institutions.[xvii]

1.3.2 Although Lebanon operates a dedicated detention facility, apprehended irregular migrants and asylum seekers can be prosecuted and incarcerated in one of the country’s nearly two dozen prisons.[xviii] It remains unclear, however, which prisons are used to confine non-citizens. In 2013, a report indicated that only eight prisons were being used for immigration-related reasons.[xix] Here, administrative detainees are rarely separated from criminal detainees, and minors are often insufficiently separated from unrelated adults. Conditions inside many of Lebanon’s prisons, meanwhile, remain a significant source of concern. In its 2019 human rights report of Lebanon, the U.S. State Department noted that prisons and detention centres remain overcrowded, that prisoners sometimes lack access to basic sanitation, and that detainees continue to face ill-treatment and abuse at the hands of security officials.[xx]

1.3.3 These reports raise particular concerns during Covid-19 pandemic, when the conditions in which detained populations are held—and the subsequent potential for the virus to spread—are of tantamount importance.

2.1 During the 2nd cycle of the Universal Periodic Review of Oman (23rd session, November 2015), Lebanon agreed to examine several recommendations relevant to its immigration detention practices.[xxi] These included the following:

3. RECOMMENDATIONS FROM OTHER HUMAN RIGHTS BODIES AND CURRENT CONCERNS

3.1 Since Lebanon’s second review, several human rights monitoring bodies have continued to identify a number of on-going concerns in Lebanon’s treatment of non-nationals.

3.2 In 2016, the UN Committee on Economic, Social and Cultural Rights urged Lebanon to accelerate the provision of documentation to refugees so that they may be able to seek work and access basic services without the risk and fear of being arrested.[xxii] That same year, the UN Committee on the Elimination of Racial Discrimination recommended that Lebanon abolish its sponsorship system and ensure migrant domestic workers enjoy freedom of movement. The committee also encouraged the country to ensure migrant domestic workers are covered by the labour law to ensure that they enjoy the same working conditions and rights as other workers.[xxiii]

3.3 In its concluding observations on Lebanon’s initial report, the UN Committee against Torture recommended that authorities refrain from detaining refugees, asylum seekers, and irregular migrants for extended periods of time, to use detention as a measure of last resort and only for as short a period as possible, and to promote alternatives to detention. The committee also highlighted the deplorable detention conditions in the country, and urged authorities to address overcrowding, and ensure that the basic needs of persons deprived of their liberty are satisfied, including with regard to health care, sanitation, visits, food, and water.[xxiv]

3.4 In 2018, the UN Human Rights Committee highlighted concerns regarding both migrant domestic workers, and refugees. With regards to migrant domestic workers, the committee recommended that Lebanon ensure they are included within the provisions of the country’s labour law, and to ensure that effective legal remedies are in place to protect their rights and ensure that they do not face reprisals such as detention. The committee also urged Lebanon to abolish the kafala system in order to protect such workers from abuse. Meanwhile, having noted the lengthy detention periods that some non-nationals face and the lack of procedural standards in place, the committee encouraged Lebanon to bring its legislation and practices relating to the detention of asylum seekers and refugees into compliance with Article 9 of the Covenant, taking into account the committee’s General Comment No.35 (particularly para.18). Finally, the committee also issued important recommendations regarding the need to improve detention conditions.[xxv]

3.5 In addition to these concerns, the GDP has identified the following on-going issues that may merit attention:

[xxiv] UN Committee against Torture ), “Concluding Observations on the Initial Report of Lebanon, CAT/C/LBN/CO/1,” 30 May 2017, https://bit.ly/2BRVQHt