Immigration Detention in Norway: While asylum applications are decreasing in Norway, the number of deportations is rising. Since 2012, when amendments to the Immigration Act were introduced extending the list of grounds for detention, detention has increasingly been used in order to make return policies more efficient. Between 2012 and 2016, the number of people placed in detention nearly doubled. Norway also continues to operate its sole detention centre in a militarised fashion. Scene to several riots and attempted suicides, the facility is run by uniformed police and has a prison-like regime that includes intrusive body searches and the use of security cells and solitary confinement. Rights observers have expressed concern that the centre’s excessive control and security measures are detrimental to detainees’ wellbeing. 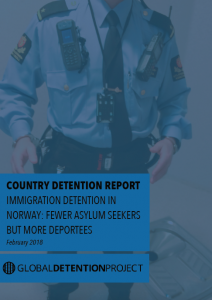