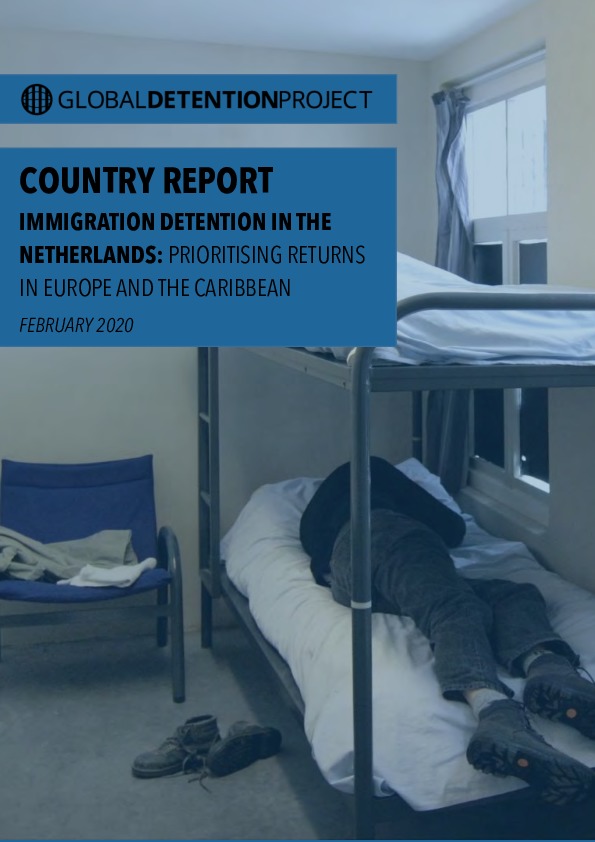 The Netherlands places increasing numbers of foreigners—including asylum seekers, families, and children—in detention. The country’s Caribbean territories—specifically, Aruba and Curaçao—have also ramped up their removal efforts in recent years as thousands of Venezuelans have sought refuge on the islands.

As it has for much of its recent history, the Netherlands remains today an important destination for migrants and asylum seekers. In 2018, the country received some 24,000 asylum applications (the seventh highest figure in the EU). However, as political currents have grown increasingly nationalistic, fuelled in part by growing anti-immigrant sentiment, the removal of undocumented migrants and failed asylum seekers has become a priority. In 2018 the country ordered approximately 18,000 persons to leave its territory, the tenth highest figure in the EU that year. Among recent policy changes have been a reduction in return support for persons from certain countries, such as the western Balkans, and the introduction of sanctions for those who employ or provide housing to undocumented migrants.

A particularly controversial policy has been the Netherlands’ requirement for non-citizens who have exhausted legal remedies to leave shelters—in essence, forcing many on to the streets. This policy triggered international condemnation. In 2017, the UN Committee on Economic, Social and Cultural Rights expressed concern that the government had made undocumented migrants’ access to housing conditional upon a “demonstrated willingness to return to the country of origin” and that it had threatened to sanction municipalities that continued to provide shelter to undocumented migrants. The committee urged the country to refrain from this policy. The policy also led to two complaints before the European Committee of Social Rights. In 2014 CEC v. the Netherlands and 2009 DCI. v. the Netherlands, the committee found that the Netherlands had violated several provisions of the European Social Charter.

In January 2013, the country’s detention practices attracted scrutiny following the suicide of a 36-year-old Russian asylum seeker in Rotterdam Airport Detention Centre. The Security and Justice Inspectorate conducted an investigation into his death and found that the government had acted negligently in terms of medical and legal assistance. These findings prompted authorities to draft the Return and Detention Act. This law, which is still awaiting approval, is intended to regulate the conditions and regimes of detention, which are currently governed by the same rules that apply to penitentiaries. Alongside the new act, a decree relating to the Return and Detention Act will detail the provisions of the new act and amend some of the provisions of the Aliens Decree.

The Kingdom of the Netherlands includes several islands in the Caribbean, notably Sint Maarten, Aruba, and Curaçao. The Kingdom’s constituent countries have their own legal system and separate status. Under Article 3 of the Charter for the Kingdom of the Netherlands, which regulates the constitutional relationship between the four constituent countries, the admission and expulsion of aliens are considered “Kingdom affairs,” but in practice Aruba and Curaçao deal with these matters quite autonomously.

In late 2016, the immigration policy—including detention—on the islands came under scrutiny in the wake of the economic collapse of nearby Venezuela. Aruba and Curaçao became destinations for thousands of Venezuelans seeking protection. According to reports, Venezuelans have not been able to apply for asylum in Curaçao, and have faced detention in appalling conditions as well as deportation. In 2018, Curaçao invoked Article 36 of the charter—which states “The Netherlands, Aruba, Curaçao and Sint Maarten shall accord one another aid and assistance”—to call upon the Kingdom of the Netherlands for assistance. It received 132,000 EUR in response. (At the beginning of 2019, the Curaçao government issued a second request, again based on Article 36, for support for its plans to extend the island’s immigration detention capacity.) In April 2018 it was also reported that the Netherlands would deploy the IND to Curaçao to separate refugees from economic migrants.