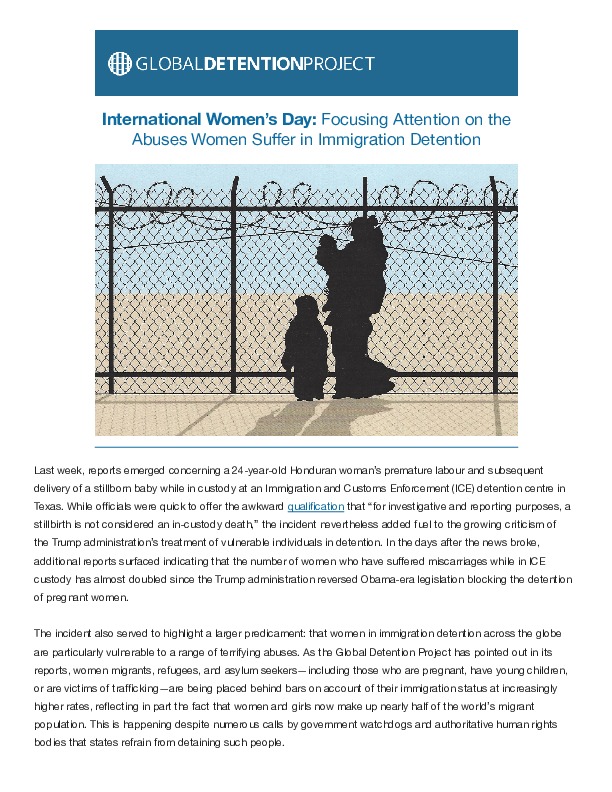 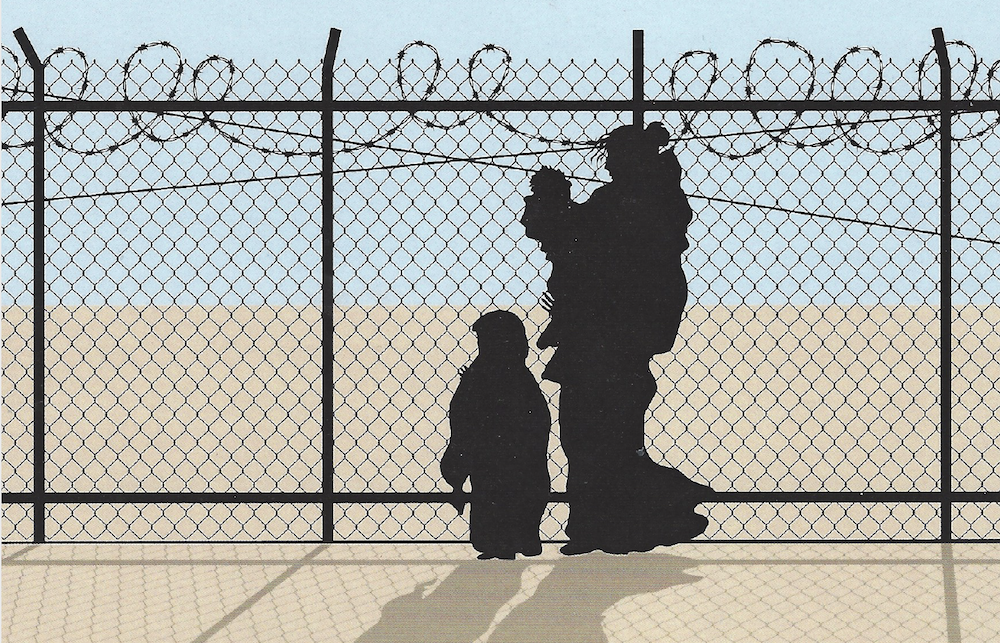 (International Women’s Day 2019) Last week, reports emerged concerning a 24-year-old Honduran woman’s premature labour and subsequent delivery of a stillborn baby while in custody at an Immigration and Customs Enforcement (ICE) detention centre in Texas. While officials were quick to offer the awkward qualification that “for investigative and reporting purposes, a stillbirth is not considered an in-custody death,” the incident nevertheless added fuel to the growing criticism of the Trump administration’s treatment of vulnerable individuals in detention. In the days after the news broke, additional reports surfaced indicating that the number of women who have suffered miscarriages while in ICE custody has almost doubled since the Trump administration reversed Obama-era legislation blocking the detention of pregnant women.

The incident also served to highlight a larger predicament, one with particular relevance on International Women’s Day: that women in immigration detention across the globe are particularly vulnerable to a range of terrifying abuses. As the Global Detention Project has pointed out in its reports, women migrants, refugees, and asylum seekers—including those who are pregnant, have young children, or are victims of trafficking—are being placed behind bars on account of their immigration status at increasingly higher rates, reflecting in part the fact that women and girls now make up nearly half of the world’s migrant population. This is happening despite numerous calls by government watchdogs and authoritative human rights bodies that states refrain from detaining such people.

Among the more pervasive detention situations that can make women vulnerable to abuse are the failure to separate them from unrelated men and the lack of female guards. “Non-citizens in administrative immigration detention often suffer from a diminished level of procedural guarantees compared to prisoners under penal law,” explains GDP Senior Researcher Mariette Grange. “For migrant and asylum-seeking women and victims of trafficking, risks in detention include threats of sexual abuse in absence of female security staff and lack of access to sexual and reproductive health.”

The GDP has reported on these practices in numerous countries, including in our most recent profile on Libya, where women are not recognised as a vulnerable group requiring specific care and protection. In one detention centre, Surman, which is operated by the Interior Ministry, there are only male guards, some of whom have been accused of systemically strip searching and raping women in their custody. According to an account from one detainee, “At night, some armed men come and take away women and 13-year-old girls. They bring them back either a few hours later or on the following day. The women and the very young girls are raped, and if they resist, they are beaten and threatened with guns.”

In some parts of the world, non-citizens who become pregnant are particularly vulnerable to abusive detention measures. In Kuwait, for instance, female non-citizens who become pregnant outside of marriage are locked inside a secure maternity hospital ward known as “Ward 10” or the “Illicit Pregnancies Ward.” Following birth, the women are subsequently moved, with their new-born, to a women’s prison as they await removal from the country. Similar practices have been observed in other Gulf states, including Bahrain, Qatar, and Saudi Arabia. Worryingly, many of the details and statistics regarding these practices are not available.

But it’s not just in the Middle East where pregnant women are detained. Although some EU states have often vague restrictions limiting the detention of certain vulnerable groups, many European countries continue to be criticised for detaining such individuals, including notably Hungary whose track record of detaining pregnant women for prolonged periods has been criticised by UN bodies. In Greece, human rights agencies like the European Committee for the Prevention of Torture have denounced the detention of pregnant women and families with young children in abysmally small cells, like at the Fylakio pre-removal centre, where a family can be confined to a mere 1m2 of living space per person. Even in countries such as the Czech Republic, where laws prohibit their detention, pregnant women, victims of trafficking, and victims of torture or rape continue to be deprived of their liberty.

“In October 2017, the European Committee for the Prevention of Torture reported that at the Lyubimets detention centre in Bulgaria “Accommodation was particularly dangerous for women and minors (including infants), who had to share the same dormitories with often unrelated adult men (the latter accommodated together with their respective families), and locked at night in total darkness (electricity being switched off between 11 p.m. and 7 a.m.). In July 2018, NGOs again reported detainees’ complaints that dormitories in Busmantsi and Lyubimets were locked at night so that they could not go to the toilet.”

Aggravating the plight of women in immigration detention is the fact that historically, rules and regulations concerning prison operations and procedures were developed almost exclusively for a male inmate population. This gender gap has become steadily more problematic as the number of women being placed behind bars has started to increase. An academic study from 2015 revealed that there were at that time no less than 700,000 women and girls confined in penal institutions across the globe. (This figure may include a number of women in administrative immigration detention in countries without dedicated immigration detention facilities.)

While the international community has sought to address this gap, including the UN General Assembly’s adoption of United Nations Rules for the Treatment of Women Prisoners and Non-custodial Measures for Women Offenders (also known as the “The Bangkok Rules”), no specific set of rules or guidelines has been developed on the proper treatment of women in immigration custody, including on the need to avoid placing pregnant and lactating women in detention. In addition, very few statistics exist about how many women and girls are languishing in immigration detention centres or what the conditions of their detention are.

On International Women’s Day 2019, the GDP is highlighting the thousands of refugee, migrant, and asylum seeker women who, when hoping for sanctuary, have instead had their freedom taken away from them. Please join us on Twitter to find out more about the conditions female detainees face around the world and #StandUp4HumanRights.
Join us on Twitter