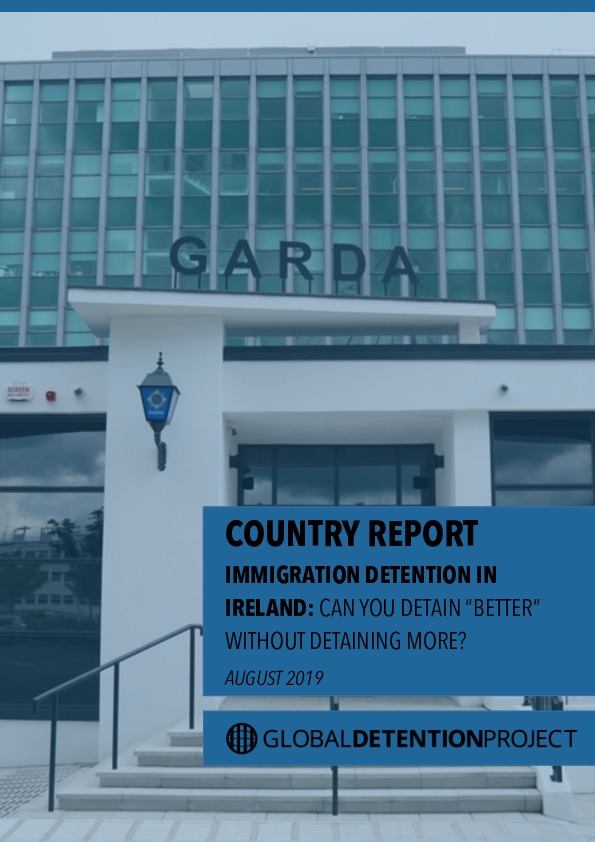 Immigration Detention in Ireland (2019 Report): Compared to other EU countries, Ireland does not detain large numbers of migrants and asylum seekers—typically less than a dozen people at any given moment. However, the country’s use of prisons and police stations for immigration purposes has spurred widespread criticism for years. Human rights watchdogs, including from the Council of Europe and the United Nations, have repeatedly urged Ireland to fix this problem by establishing a specialised detention facility. However, opening such a facility, which after years of delays is slated to open in 2019, raises questions about whether this may lead to more people being detained. View the Ireland Immigration Detention Profile.

Ireland detains among the fewest numbers of migrants and asylum seekers in the European Union (EU), approximately 400 individuals annually (and 11 on any given day), most of whom are detained for very brief periods of time. However, because Ireland uses prisons and police (Garda) stations for immigration purposes, it has come under repeated pressure to build dedicated immigration detention facilities, a move that some observers think could lead to more detention in the country.

Among the consistent critics of Ireland’s failure to open a specialised immigration centre has been the European Committee on the Prevention of Torture (CPT). After its most recent visit to the country (in 2014), the committee admonished Ireland, saying: “A prison is by definition not a suitable place in which to detain someone who is neither suspected nor convicted of a criminal offence.” (The CPT has a planned visit to Ireland in 2019.)

The issue of immigration detention gained widespread public attention in 2017 after a former au pair from Brazil who had returned to Ireland to visit friends was detained at the Dochas all-female prison under suspicion of attempting to enter the country to work illegally. The incident spurred public protest as well as censure from the Brazilian Embassy, which expressed concern over how people refused entry into Ireland could be sent to “common prisons.” The Irish Times, in a follow up story titled “421 people committed to prison in 2016 on immigration-related issues,” reported that the use of prisons had also received criticism from the UN Committee against Torture, which provided recommendations to Ireland on this issue in both 2011 and 2017.

Ireland has responded to the criticism by repeatedly stating that it intends to open an immigration detention centre at Dublin Airport. Despite initially announcing that it would open a facility by 2016, in 2017 the government revised its projections, stating that construction would not be completed until July 2018. Nearly a year later however, the Minister for Justice and Equality stated that work would not be completed until the end of 2018. According to the Irish Refugee Council (IRC), however, as of early 2019 the Dublin Airport facility had still not opened.

Press reports from mid-June 2019 indicated that the facility—built at a cost of 3.6 million EUR and located on the premises of an unused building called Transaer House—would not be open until late 2019. According to one report, there have been delays in opening the facility due to disagreements over its dual use as a Garda station and a detention facility. The centre is reportedly intended to be used to confine persons deemed inadmissible upon arrival to the country and will have holding “pens” for up to 15 persons sitting and 30 standing.

In November 2017, Ireland’s Minister of Justice and Equality announced that the country would opt-in to the EU Recast Reception Conditions Directive to comply with a May 2017 Supreme Court ruling, which ruled against the country’s prohibition on asylum seekers accessing employment. In July 2018, Ireland adopted the European Communities (Reception Conditions) Regulations to transpose the Directive into its domestic law, following the decision to opt-in. The directive requires the state to provide a specialised detention facility for detained protection applicants, amongst other measures. This implies that Ireland is no longer permitted to detain asylum applicants in penal facilities, which could spur changes in Irish immigration legislation.