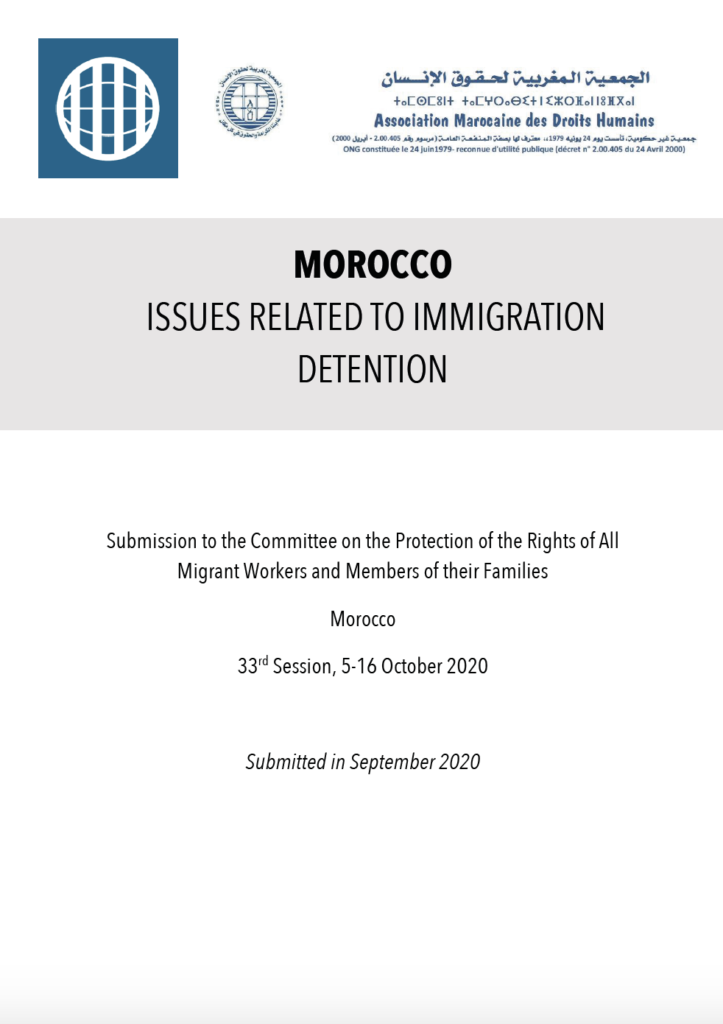 [This submission is also available in French HERE]

The Global Detention Project and the Moroccan Association for Human Rights welcome the opportunity to provide information relevant to the list of issues for Morocco with respect to the implementation of the International Convention on the Protection of the Rights of all Migrant Workers and Members of their Families (CMW), ratified by Morocco in 1993.

The Global Detention Project (GDP) is an independent research centre based in Geneva that investigates immigration-related detention. Its objectives are to increase transparency in the treatment of detainees, to encourage adherence to fundamental norms, to reinforce advocacy aimed at reforming detention practices, and to promote scholarship of immigration control regimes.[1]

This submission addresses Morocco’s implementation of Articles 16, 17, 22, and 23 of the CMW, and thus focuses upon the State party’s laws and practices on issues related to detention and deportation for migration-related reasons. This submission also takes into account the joint General Comment No.4 (2017) of the Committee on the Protection of the Rights of all Migrant Workers and Members of Their Families and No.23 (2017) of the Committee on the Rights of the Child on “State obligations regarding the human rights of children in the context of international migration in countries of origin, transit, destination and return,” which states that “child and family immigration detention should be prohibited by law and its abolishment ensured in policy and practice.”[3]

An important transit and destination country for migrants, Morocco has witnessed significant migratory flows in recent decades. With many using the country as a departure point in their passage to Europe, the country has become an important focal point for European Union (EU) efforts to externalise “migration management,” pressuring—and providing—funding to the country to block transmigration. In December 2019, for example, the EU announced a package of 101.7 million EUR to Morocco (via the Emergency Trust Fund for Africa) to help the country combat irregular migration and human trafficking.[4] With migratory routes increasingly difficult to navigate, today an estimated 700,000 sub-Saharan migrants reside in the country.[5]

For many years, the country faced significant criticism—both internationally and domestically—regarding its migration policies and widespread human rights abuses. In September 2013, the National Human Rights Council (an independent institution promoting human rights) issued recommendations for a new migration policy in compliance with Morocco’s commitments under international human rights law and refugee law. King Mohammed VI endorsed these recommendations, announcing a new “humanitarian approach” to migration and asylum affairs, including the promotion of integration and access to essential services. This led to the launch of a regularisation programme for undocumented migrants (in 2014), and the adoption of the 2014 National Strategy on Immigration and Asylum (Stratégie nationale d’immigration et d’asile or SNIA).[6]

However, observers point out that this shift in posture did not lead to the development of concrete new migration legislation. Today, Law No. 02-03 of 11 November 2003 (the Migration Act) remains the principle piece of legislation governing the entry and stay of foreign nationals, emigration, and irregular migration—despite concerns raised by international observers (including the CMW)[7] regarding some of its provisions. In particular, the act provides stiff criminal penalties for migration violations (Articles 42-48), including: imprisonment for up to six months and/or a fine of up to 20,000 MAD for foreign nationals who enter or attempt to enter the country irregularly, or who remain on Moroccan territory beyond the period authorised by their visa (the penalty can be doubled for recurring offences), and imprisonment for up to two years for foreign nationals who evade or attempt to evade the execution of an expulsion or deportation order at the border or who re-enter the country after having been banned or expelled.

Law No. 02-03 does, however, provide important rules for the proper treatment of non-citizens taken into custody, including detailed specifications on lengths of detention and access to rights. According to Article 35, a court order is required for the detention of foreign nationals beyond 24 hours, which can be extended for up to fifteen days, plus ten additional days. Foreign nationals detained on administrative grounds should be immediately informed of their rights (with the assistance of an interpreter if necessary), and the prosecutor should be immediately informed (Article 34), and during their confinement the detainee should be able to request the assistance of an interpreter, doctor, lawyer, and/or their consulate or a person of their choice (Article 36). However, observers argue that authorities routinely fail to apply the provisions of the Act.

The 2011 Moroccan Constitution includes safeguards against arbitrary detention and guarantees the right to information about grounds for detention, legal assistance, and communication with relatives (Article 23).[8]

To date, Morocco has not established dedicated immigration detention facilities. Instead, apprehended non-nationals are confined in prisons, as well as transit zones and ad-hoc detention facilities—despite Law No.02-03 requiring non-citizens in migration-realted proceedings be held in facilities that are not under the management of the prison administration (Article 34).

Articles 16, 17, 22, and 23 of the Convention (right to liberty and security of person; protection against arbitrary arrest and detention; prohibition of collective expulsions; protection in the event of rights violations)

Despite the country’s declared emphasis on a humanitarian approach to migration, many migrants and asylum seekers (particularly those from sub-Saharan countries) continue to face harsh treatment, including arbitrary arrest, forced displacement, detention, and deportation—suggesting that authorities are back-peddling on the promises made in 2013.

In the summer of 2018, hundreds of sub-Saharan migrants were arrested during raids conducted by the Moroccan police together with the Royal Gendarmerie and the Auxiliary Forces. Reportedly arrested in their houses, migrants were herded into buses with just the clothes on their backs before being transported away from the north of the country to cities in the south. According to Amnesty International, migrants were handcuffed or in some cases had their hands tied together with rope.[9] Others were detained in police stations (such as the Central Police Station in Tangiers, videos from which show migrants detained between the station’s courtyard and car park[10]). Denied information about the reasons for their detention, some were subsequently deported from the country with no opportunity to challenge the removal decision. In one case, a child from Mali reportedly died when he tried to exit a bus that was transferring him from the Tangiers to the south and was subsequently buried in an unmarked grave in Kenitra.[11]

Although Moroccan authorities did not provide details regarding the numbers forcibly removed and relocated, the rights group GADEM estimates that between June and October 2018, some 6,500 migrants were arrested and displaced.[12] While Moroccan officials claimed that the raids were designed to target human trafficking and irregular migrants, children, UNHCR-registered asylum seekers, and registered migrants with residency cards were amongst those arrested.[13] According to the country’s government spokesman, these operations were in conformity with national laws aimed to tackle illegal immigration.[14]

Since 2018, these raids have continued—even during the Covid-19 crisis. AMDH has received witness testimonies from migrants who experienced violent raids and roundups in makeshift forest migrant camps surrounding Tangier. During one such incident on 31 July 2020, a Cameroonian migrant was reportedly killed after being hit on the head by police.[15] According to the human rights NGO Caminando Fronteras, between March and mid-May, at least 100 migrants—including many children—were arrested by Moroccan security forces in areas surrounding the Spanish enclaves of Ceuta and Melilla before being abandoned in the Algerian desert, despite the closure of the country’s borders. Some migrants recounted being deported in the middle of the night, and alleged that officers had confiscated and destroyed their mobile phones.[16]

As well as collective expulsions, significant numbers of migrants have also faced detention during the pandemic—purportedly to ensure that they are tested for the virus. Since the first case was confirmed in Morocco in March, numerous incidents have been reported in which migrants have been rounded up and detained. On one occasion, approximately 50 sub-Saharan migrants were arrested—reportedly based purely on their skin colour—in Laâyoune (in disputed Western Sahara, and an area known for departures to the Canaries) on 21 June 2020 and detained in a local school for seven days. During this time, the group had no access to running water, clean clothes, or sufficient food; no information on when they would be released; and no ability to leave the building to go outside. Those who tested positive were placed in quarantine in a nearby hotel.[17] Testimonies collected by AMDH confirm that since the start of the pandemic, similar incidents have occurred across the country, with migrants detained in ad-hoc facilities such as schools, youth centres, and hotels for periods ranging from a few days to several months.[18]

In light of the information provided in this submission, we urge the CMW to request the following information from the Moroccan government to assess its adherence to Articles 16, 17, 22, and 23 of the Convention, as well as with respect to the conclusions drawn by the Committee and the Committee on the Rights of the Children in their joint General Comment.

[4] European Commission, “The EU is Boosting its Support to Morocco with New Programmes Worth €389 Million,” 20 December 2019, https://ec.europa.eu/commission/presscorner/detail/en/ip_19_6810

[7] UN Committee on the Protection of the Rights of All Migrant Workers and Members of Their Families, “Concluding Observations on the Initial Report of Morocco Adopted by the Committee at its Nineteenth Session (9-23 September 2013), CMW/C/MAR/CO/1,” 8 October 2013, https://tbinternet.ohchr.org/_layouts/15/treatybodyexternal/Download.aspx?symbolno=CMW/C/MAR/CO/1&Lang=En

[11] For more information about the case, contact the Moroccan Association for Human Rights.