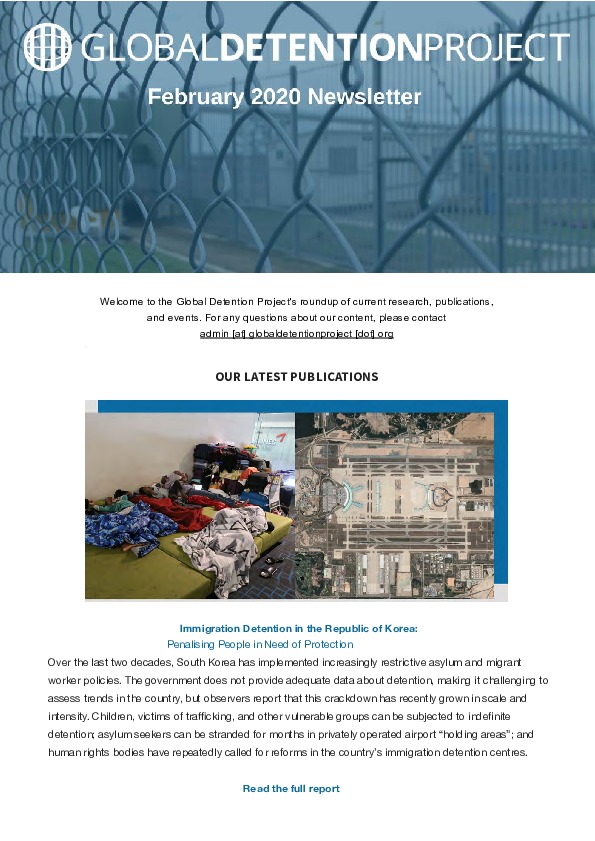 Immigration Detention in the Republic of Korea: Penalising People in Need of Protection

Over the last two decades, South Korea has implemented increasingly restrictive asylum and migrant worker policies. The government does not provide adequate data about detention, making it challenging to assess trends in the country, but observers report that this crackdown has recently grown in scale and intensity. Children, victims of trafficking, and other vulnerable groups can be subjected to indefinite detention; asylum seekers can be stranded for months in privately operated airport “holding areas”; and human rights bodies have repeatedly called for reforms in the country’s immigration detention centres. Read the full report.

Immigration Detention in the Netherlands: Prioritising Returns, in Europe and the Caribbean

The Netherlands places increasing numbers of foreigners—including asylum seekers, families, and children—in detention. The country’s Caribbean territories—specifically, Aruba and Curaçao—have also ramped up their removal efforts in recent years as thousands of Venezuelans have sought refuge on the islands. Read the full report.

Submission to the Working Group on Discrimination against Women in Law and Practice: Romania

The GDP submitted information to the Working Group ahead of its visit to Romania (24 February – 6 March). Taking note of the Working Group’s intention to pay particular attention to women and girls who encounter multiple and intersecting forms of discrimination, including migrants and asylum seekers, the submission highlights recent Romanian immigration detention practices that may be discriminatory with respect to the health, well-being, and legal standing of women and girls subject to migration control measures. Read the full submission.

On 12 March, GDP Director Michael Flynn will join Abdul Aziz Muhamat (2019 Martin Ennals Prize Winner) and journalist Yves Magat to discuss the privatisation of prisons and administrative detention as part of Geneva’s International Film Festival and Forum on Human Rights 202. This panel discussion will follow a screening of Femke Van Velzen’s film, “Prison for Profit,” which examines G4S’s management of the Mangaung private prison in South Africa. (The event will be held in the Salle communale d’Anières.) For more information, and to book tickets, visit the FIFDH 2020 website.

In coming weeks, the GDP will be participating in several meetings and events in Geneva focusing on the rights of migrants.

In its February 2020 edition, the esteemed U.S. journal Harper’s publicised estimates of the largest child detaining countries in the world, based on statistics from the Global Detention Project, in its widely read “Harper’s Index.”