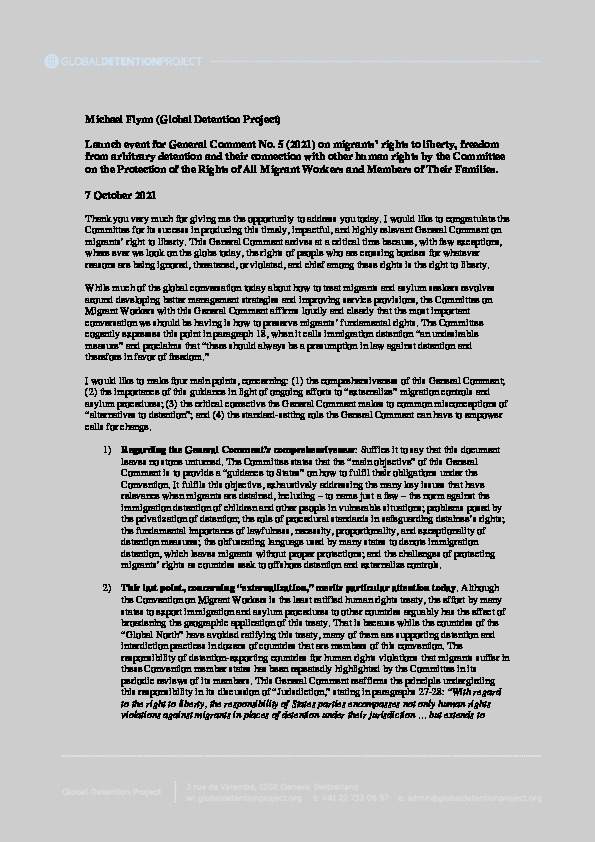 Launch event for the UN Committee on Migrant Workers’ General Comment No. 5 (2021) on migrants’ rights to liberty, freedom from arbitrary detention and their connection with other human rights by the Committee on the Protection of the Rights of All Migrant Workers and Members of Their Families.

Thank you very much for giving me the opportunity to address you today. I would like to congratulate the Committee for its success in producing this timely, impactful, and highly relevant General Comment on migrants’ right to liberty. This General Comment arrives at a critical time because, with few exceptions, where ever we look on the globe today, the rights of people who are crossing borders for whatever reasons are being ignored, threatened, or violated, and chief among these rights is the right to liberty.

While much of the global conversation today about how to treat migrants and asylum seekers revolves around developing better management strategies and improving service provisions, the Committee on Migrant Workers with this General Comment affirms loudly and clearly that the most important conversation we should be having is how to preserve migrants’ fundamental rights. The Committee cogently expresses this point in paragraph 18, when it calls immigration detention “an undesirable measure” and proclaims that “there should always be a presumption in law against detention and therefore in favor of freedom.”

I would like to make four main points, concerning: (1) the comprehensiveness of this General Comment; (2) the importance of this guidance in light of ongoing efforts to “externalize” migration controls and asylum procedures; (3) the critical corrective the General Comment makes to common misconceptions of  “alternatives to detention”; and (4) the standard-setting role the General Comment can have to empower calls for change.

Regarding the General Comment’s comprehensiveness: Suffice it to say that this document leaves no stone unturned. The Committee states that the “main objective” of this General Comment is to provide a “guidance to States” on how to fulfil their obligations under the Convention. It fulfils this objective, exhaustively addressing the many key issues that have relevance when migrants are detained, including – to name just a few – the norm against the immigration detention of children and other people in vulnerable situations; problems posed by the privatization of detention; the role of procedural standards in safeguarding detainee’s rights; the fundamental importance of lawfulness, necessity, proportionality, and exceptionality of detention measures; the obfuscating language used by many states to denote immigration detention, which leaves migrants without proper protections; and the challenges of protecting migrants’ rights as countries seek to offshore detention and externalize controls.

This last point, concerning “externalization,” merits particular attention today. Although the Convention on Migrant Workers is the least ratified human rights treaty, the effort by many states to export immigration and asylum procedures to other countries arguably has the effect of broadening the geographic application of this treaty. That is because while the countries of the “Global North” have avoided ratifying this treaty, many of them are supporting detention and interdiction practices in dozens of countries that are members of this convention. The responsibility of detention-exporting countries for human rights violations that migrants suffer in these Convention member states has been repeatedly highlighted by the Committee in its periodic reviews of its members. This General Comment reaffirms the principle undergirding this responsibility in its discussion of “Jurisdiction,” stating in paragraphs 27-28: “With regard to the right to liberty, the responsibility of States parties encompasses not only human rights violations against migrants in places of detention under their jurisdiction … but extends to places of detention outside their territory … through the design, financing, administration or supply of places of detention abroad.”

The third point I’d like to make concerns “alternatives to detention.” Global conversations today about improving migration management, including those related to the implementation of the Global Compact for Migration, employ a potentially harmful notion about the meaning and significance of “alternatives to detention,” also known as ATDs. The dominant definition appears to be that ATDs “are any law, policy or practice by which persons are not detained for reasons relating to their migration status.” However, as a growing number of observers—including UNHCR, the European Parliament, the European Court of Justice, among others—recognize, ATDs are not in fact “any law, policy or practice”; rather, they are a process that has a very specific and narrowly circumscribed legal function: That function is to provide a test during lawful detention decision-making procedures about whether there are any measures short of detention that can serve the same purpose as detention. Importantly, the General Comment establishes a very high bar for what may be considered a legitimate detention procedure. It is this role of ATDs that is critical as it provides the bedrock for preventing arbitrary detention by testing whether each detention decision is both necessary and proportionate. If, on the other hand, we opt to understand ATDs as “any law, policy or practice that keeps people from being detained,” then liberty itself ultimately becomes an “alternative to detention,” as does access to asylum procedures, as does the use of discretion by officials not to detain someone. In effect, such a definition prioritizes the concept of “universal detainability” over the fundamental universality of the right to liberty. This General Comment provides a much-needed corrective to this misguided framing of ATDs: In paragraph 48, the Committee states that it  “understands as alternatives to detention all community-based care measures or non-custodial accommodation solutions … which must be considered in the context of lawful detention decision procedures to ensure that detention is necessary and proportionate in all cases, with the aim of … avoiding arbitrary detention. … In cases where detention no longer has a legal basis … alternatives to detention are no longer applicable.”

The last point I would like to make concerns the standard setting role that a General Comment like this can have, and how this can empower efforts to promote the human rights of migrants. This point can be illustrated by highlighting an earlier General Comment the Committee produced jointly with the Committee on the Rights of the Child. In their 2017 Joint General Comment on the general principles regarding the human rights of children in the context of international migration, the CRC and the CMW affirmed that the immigration detention of children in all cases represents a child rights violation because in its essence this form of detention violates the best interests of a child. This clear, concise, and bold affirmation of a gradually strengthening norm against the immigration detention of children—which has been fortified by a growing body of evidence revealing the lasting damage that even short-term detention can have on children—has provided a legitimating buttress for the advocacy agendas of organizations and campaigns across the globe. Looking back now, we can see that the Joint General Comment was a kind of turning point, urging all of us down an unavoidable path leading to a better understanding of the need to nurture the well-being of refugee, migrant, and asylum-seeking children. It is my hope that this new General Comment will serve a similar role, spurring us to re-prioritize the importance of the right to liberty in all of our conversations and discussions concerning global migration today.