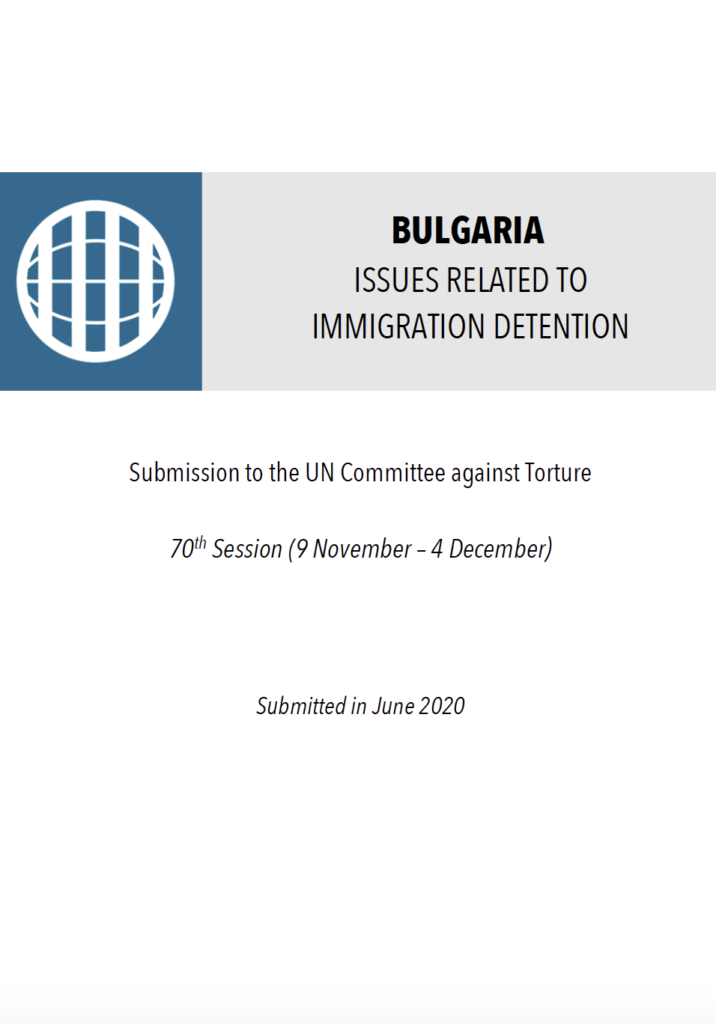 Submission to the UN Committee against Torture (70th Session: 9 November – 4 December 2020) – List of Issues Prior to Reporting

The Global Detention Project (GDP) is an independent research centre based in Geneva, Switzerland, that investigates the use of detention as a response to international immigration. Its objectives are to improve transparency in the treatment of detainees, to encourage adherence to fundamental norms, to reinforce advocacy aimed at reforming detention practices, and to promote scholarship of immigration control regimes. As per the GDP’s mandate, this submission focusses on the state party’s laws and practices concerning detention for immigration-related reasons.

Despite a significant drop in irregular arrivals since 2015 following the introduction of the EU Turkey deal (in 2019, arrivals had decreased since 2015 by 91 percent), immigration detention has remained a key tool in Bulgaria’s response to migration and asylum flows—in addition to other measures such as the construction of a razor-wire fence along its southern border with Turkey. With decreasing arrivals, the numbers in immigration detention have decreased: in 2019, 2,184 non-nationals were detained in the country—compared to 11,902 in 2015. The conditions that they are held in, however, remain deeply concerning according to reports from national and international human rights monitors, which have repeatedly highlighted poor material conditions and instances of abuse.

Significant numbers of migrants, asylum seekers, and refugees have also reported experiencing violent pushbacks by Bulgarian border forces at the country’s border with Turkey. In 2018, Save the Children reported that the largest number of violent pushbacks in the EU involving children took place at the Bulgarian border. Moreover, in 2019, four refoulement cases of first-time asylum applicants were reported—involving nationals from Iran, Afghanistan, and Nigeria. The country’s Migration Directorate returned the individuals to their country of origin before the end of their asylum procedures. In another case, two Syrian asylum seekers who reached the Harmanli Reception Centre were handed to the Svilengrad Border Police precinct by the centre’s security guards. The border police allegedly tore up their paperwork and pushed them back into Turkey.

As of June 2020, the country operated two dedicated long-term immigration detention facilities: one in Busmantsi (opened in 2006) and one in Lyubimets (opened in 2011). (The State Agency for Refugees also runs a closed unit adjacent to Busmantsi which is used to accommodate asylum seekers for up to 18 months if they repeatedly violate house rules in open reception centres or immigration detention facilities or who are suspected or accused of a criminal offence.) A third facility was opened in 2013 in Elhovo, close to the border with Turkey, which authorities dubbed a “distribution” or “allocation” centre for short-term detention—however, this has been closed since 2017 for “reorganizational and repair activities.” The average length of time for which non-nationals are detained in Busmantsi and Lyubimets increased between 2015 and 2017—from 25 and 24 days to 59 and 52 days, respectively.

The legal framework of immigration detention in Bulgaria is based on two different laws: the 1998 Law on Foreigners in the Republic of Bulgaria (LFRB) (Закон За Чужденците В Република България), as amended in April 2019, and the Law on Asylum and Refugees (LARB) (Закон за убежището и бежанцит), which was also amended in April 2019. These regulate the entry, residence, detention, and removal of migrants and asylum seekers. The Constitution of the Republic of Bulgaria also sets out safeguards against arbitrary detention (Article 30).

The detention of asylum seekers contravenes Article 31 of the Convention Relating to the Status of Refugees. Numerous treaty bodies have thus urged authorities to cease the practice—including the UN Committee against Torture (2011), the UN Committee on the Elimination of Racial Discrimination (2017), and the Human Rights Committee (2018).

During the UN Universal Periodic review of Bulgaria in 2015, Brazil also recommended that Bulgaria reform its legislation authorising the detention of asylum seekers on the basis of illegal entry—echoing CAT’s 2011 recommendation. To-date however, asylum seekers continue to be detained.

In December 2016, Bulgaria introduced a third type of administrative detention of foreign nationals, the so-called “short-term accommodation” (Article 44(13) of the LFRB). The provision allows relevant authorities to issue short-term “accommodation” (detention) orders for up to 30 days to establish identity and to assess the subsequent measures that should be taken. This type of detention is to take place in “special units” within the Migration Directorate’s detention centres. According to observers, the introduction of short-term detention legalised the existing practice of detaining non-citizens are the border in the Elhovo “distribution centre,” which had previously occurred in the absence of specific detention orders.

Bulgarian law employs euphemistic language in characterising the administrative detention of migrants and asylum seekers, referring to “compulsory accommodation” in “special homes for temporary accommodation of foreigners” (LFRB Article 44(6)). The LFRB does not use the term “detention,” although in practice the law refers to deprivation of liberty on administrative grounds.

Conditions inside Bulgaria’s closed detention facilities have been found to be extremely poor, and regular allegations of abuse have been levelled at centre authorities.

Material conditions in both facilities have been reported to be inadequate—furniture has been found to be broken, bedding dirty, and mattresses infested with bed bugs. Several visits by the European Committee for the Prevention of Torture (CPT) have provided important information regarding the conditions detainees face.

In a follow-up visit in 2018, the committee noted some improvements—largely because detainee numbers had shrunk and overcrowding was no longer an issue. However, material conditions remained unsatisfactory; custodial staff continued to carry truncheons, including in accommodation areas; and detainees continued to lack privacy and remained unable to access toilets during the night. The committee wrote, “in both homes [detention facilities], the lack of access to a toilet at night for most of the detainees obliged them to use bottles or buckets, or to comply with their needs of nature through the windows.” Furthermore, detainees continued to lack access to cleaning materials and products, hygiene items, and clothing and shoes.

At the end of 2019, 87 non-nationals were reported to be confined in the 400-capacity Busmantsi facility, while 32 non-nationals were reported to be in the 300-capacity Lyubimets. However, the Bulgarian Helsinki Committee noted that material conditions remained unsatisfactory, and medical staff were not appointed on a daily basis. Reportedly, “a nurse and/or doctor visits detention centres on a weekly basis, but the language barrier and lack of proper medication make these visits almost a formality and without any practical use for the detainees.” Similar concerns regarding health care provision had been noted by the CPT in 2017 and 2018. The committee had urged Bulgaria to ensure that detainees have access to external specialists—particularly psychiatrists; improve the quality of medical screening upon arrival; and provide non-citizens with interpretation when necessary.

In 2017, the UN Committee on the Elimination of Racial Discrimination (CERD) recommended that Bulgaria “continue improving the capacity and material conditions of reception centres, and ensure that all asylum seekers have access to basic services, including health care, psychological assistance and education.” The committee also called for investigations into the excessive use of force at borders and in places of detention. Previously, during the UPR of Bulgaria in 2015, Sweden recommended that detainees be treated in a humane and dignified manner.

While migration law prohibits the detention of unaccompanied children, it is permitted under asylum law. According to Article 44(9) of the LFRB, accompanied minors can be “forcibly accommodated” (detained) for up to three months, but that this does not apply to unaccompanied minors. However, Article 45e(2) appears to allow the detention of “minor aliens seeking international protection.” This paradoxical situation is the result of the transposition of the recast Reception Conditions Directive 2013/33/EU that introduced the detention of asylum seekers for the first time in January 2016.

During the CPT’s 2017 visit to Lyubimets, the committee noted that there were 43 minors (including infants) at the centre, but that “absolutely nothing was provided for them, no adapted food and clothes, no toys, and it was difficult to obtain nappies for infants and sanitary materials for women.” Moreover, women and minors often had to share dormitories with unrelated men—at night, they were locked into their dormitories without any electricity.

More recently, on 8 November 2018 the European Commission sent a letter of formal notice to the Bulgarian government concerning the incorrect implementation of EU asylum legislation. The EC had found Bulgaria to be in breach of the recast Asylum Procedures Directive, the recast Reception Conditions Directive, and the Charter of Fundamental Rights. Concerns related, in particular, to the accommodation and legal representation of minors— as well as issues such as the correct identification of vulnerable asylum seekers. In response, the government tabled for public consultations a draft proposal to amend the LARB, although this did not appear to address the issue pertaining to minors.

According to the Annual Border Monitoring report under the Tripartite Memorandum of Understanding (MoU), there were 198 cases of unaccompanied children being “attached” to unrelated adults by police authorities in 2016, and 141 in 2017. In November 2018, the Human Rights Committee highlighted the practice when it stated “While noting that national law prohibits detention of unaccompanied children, the Committee is concerned that this rule is reportedly circumvented in practice by “attaching” unaccompanied children to unrelated adults or registering such children as adults (art. 9 and 24).” The issue was similarly raised in 2015 during the UPR of Bulgaria by the UN Human Rights Council (HRC), when Sweden and Belgium recommended that children should not be detained with unrelated adults.

As of 19 June, 3,674 cases of Covid-19 had been confirmed inside Bulgaria, and the country had reported 190 deaths. Despite multiple warnings of the dangers that confined populations face during the Covid-19 pandemic, according to information supplied to the GDP by the Bulgarian Ministry of Interior, no immigration detainees were released from closed detention facilities during the pandemic. The ministry further stated that detained migrants are only tested for Covid-19 if they display symptoms, and that all newly accommodated foreigners have been separated from all other third-country nationals in special quarantine premises for 14 days. A visitation ban was also temporarily introduced for relatives and acquaintances— although lawyers and human rights representatives could reportedly continue to meet with detainees.

However, given observers’ regular reports of inadequate sanitary facilities within detention centres, a lack of appropriate health care provision, and a lack of cleaning products for detainees to use, the GDP remains concerned that conditions within facilities expose this already vulnerable population to increased health risks.

Based on the details provided in this submission, the GDP urges the UN Committee against Torture to consider requesting the following information from Bulgarian authorities:

• Information about steps that the country plans to take to improve the material conditions within Busmantsi and Lyubimets detention facilities.

• Measures taken in response to the Covid-19 pandemic to safeguard people in immigration detention, including to ensure that sanitary facilities are properly maintained and accessible and to provide access to appropriate health care services.

• The reasons for not releasing detainees, particularly vulnerable individuals, from immigration detention after the onset of the pandemic even as other countries in Europe did so.

• Information pertaining to the draft amendments to the LARB—and how Bulgaria intends to address concerns regarding the detention of minor asylum seekers, and their confinement alongside unrelated adults.

• Up-to-date statistics detailing the number of children placed in detention.

• Details of efforts to de-emphasise the penal nature of immigration detention by ensuring that custodial staff cease carrying weapons, particularly within accommodation areas.

• Details regarding the “re-organizational and repair” activities at the Elhovo facility and an update on whether Bulgarian authorities plan to re-open the centre.