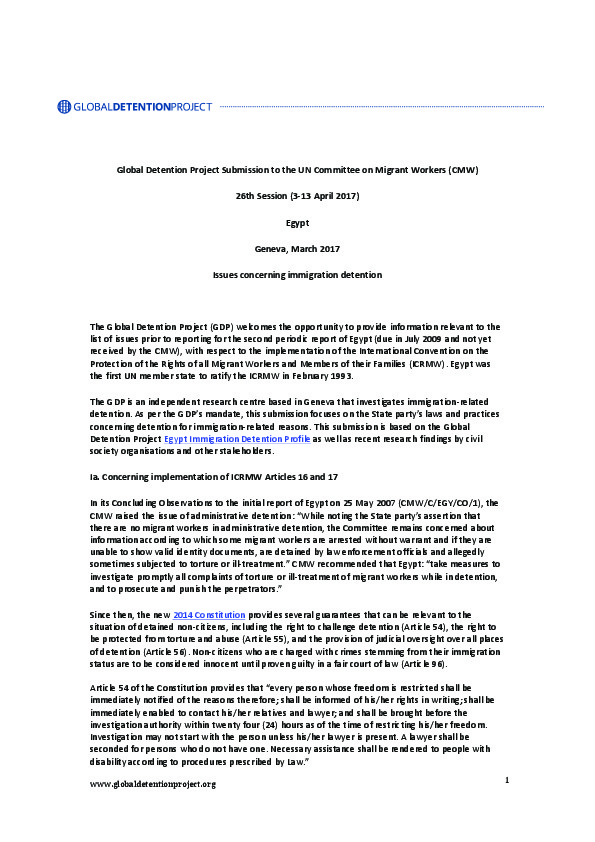 The Global Detention Project (GDP) welcomes the opportunity to provide information relevant to the list of issues prior to reporting for the second periodic report of Egypt (due in July 2009 and not yet received by the CMW), with respect to the implementation of the International Convention on the Protection of the Rights of all Migrant Workers and Members of their Families (ICRMW). Egypt was the first UN member state to ratify the ICRMW in February 1993.

The GDP is an independent research centre based in Geneva that investigates immigration-related detention. As per the GDP’s mandate, this submission focuses on the State party’s laws and practices concerning detention for immigration-related reasons. This submission is based on the Global Detention Project Egypt Immigration Detention Profile as well as recent research findings by civil society organisations and other stakeholders.

In its Concluding Observations to the initial report of Egypt on 25 May 2007 (CMW/C/EGY/CO/1), the CMW raised the issue of administrative detention: “While noting the State party’s assertion that there are no migrant workers in administrative detention, the Committee remains concerned about information according to which some migrant workers are arrested without warrant and if they are unable to show valid identity documents, are detained by law enforcement officials and allegedly sometimes subjected to torture or ill-treatment.” CMW recommended that Egypt: “take measures to investigate promptly all complaints of torture or ill-treatment of migrant workers while in detention, and to prosecute and punish the perpetrators.”

Since then, the new 2014 Constitution provides several guarantees that can be relevant to the situation of detained non-citizens, including the right to challenge detention (Article 54), the right to be protected from torture and abuse (Article 55), and the provision of judicial oversight over all places of detention (Article 56). Non-citizens who are charged with crimes stemming from their immigration status are to be considered innocent until proven guilty in a fair court of law (Article 96).

Article 54 of the Constitution provides that “every person whose freedom is restricted shall be immediately notified of the reasons therefore; shall be informed of his/her rights in writing; shall be immediately enabled to contact his/her relatives and lawyer; and shall be brought before the investigation authority within twenty four (24) hours as of the time of restricting his/her freedom. Investigation may not start with the person unless his/her lawyer is present. A lawyer shall be seconded for persons who do not have one. Necessary assistance shall be rendered to people with disability according to procedures prescribed by Law.”

Despite these safeguards, detention of migrants, asylum-seekers and refugees remains a significant concern in Egypt. They are under threat of detention both as they attempt to leave the country and inside cities. Amnesty International reports that “Egyptian security forces arrested more than 4,600 refugees, asylum-seekers and migrants as they attempted to cross the Mediterranean Sea to Europe, according to figures published by UNHCR, the UN refugee agency, in September [2016].[1] This campaign of arrests is said to represent an 85 percent increase compared with 2015.[2] Most of the detainees are Syrians, as well as Sub-Saharan and persons from the Horn of Africa held for unauthorized entry or residence. There are also allegations of security crackdowns on Syrian, Sudanese and other African refugees hosting neighbourhoods leading do detention and abuse including beatings and torture during detention.[3]

The principle immigration-related laws governing the arrest, detention, and deportation of non-citizens are The Law of Entry and Residence of Aliens in the Territories of the United Arab Republic and their Departure Therefrom (Law No. 89 of 1960 as amended by law No. 88 of 2005) and Presidential Decree Security of the Eastern Border of Arab Republic of Egypt (1995). The applicable law depends on where and when a migrant is apprehended.

It is challenging to distinguish between administrative and criminal detention in cases involving non-citizens. Asylum seekers, refugees, and undocumented migrants can be subject to both criminal penalties and administrative detention for unauthorized entry or residence. Nevertheless, it appears that while criminal grounds for status-related violations may be used as the basis for arresting non-citizens, authorities generally do not pursue criminal sanctions, instead opting to hold these people in a form of administrative detention until they are deported or their cases otherwise resolved by immigration authorities (see the GDP Egypt Immigration Detention Country profile).

The Law of Entry and Residence does not contain any provisions guaranteeing rights to detained migrants, such as access to a lawyer. Asylum seekers, refugees, stateless persons, and migrants arrested for illegal entry at non-authorised border points fall within the jurisdiction of the nearest military tribunal and have no access to appeal, a practice that has been criticized as violation of Egypt’s obligations under the International Covenant on Civil and Political Rights (Art. 14) and the Arab Charter on Human and People’s Rights, which provides for due process and a fair trial (Art. 26). Irregular migrants and refugees are sometimes given an appeal in court, though this appears to occur on an ad hoc basis.

Egypt does not operate facilities specifically for migrants. Rather, the country’s prisons, police stations, and military camps have been used to detain migrants and refugees apprehended at the borders or after entering the country. Many of these facilities are police stations, including many stations in the Sinai Peninsula and the Nile Delta region, as well as two prisons in Cairo.

Reports indicate that UNHCR has access to registered refugees in detention but not to unregistered asylum seekers. The UN Committee on the Elimination of Racial Discrimination (CERD) recommended in 2015 that Egypt put an end to the detention of asylum seekers and refugees and, use detention solely for very specific cases and for the shortest possible time and allow UNHCR “to visit the persons concerned with a view to identifying those who may be entitled to international protection.” [4] Civil society meets obstacles when trying to access detained migrants.[5]

In 2013 a European Commission report monitoring implementation of the ENP stated that “hundreds of African nationals (most of them Eritreans) are reportedly detained in police stations in Sinai in conditions that fall well below minimum detention standards required by human rights law.”[6] The European Commission implementation report for 2014 stated that: “The human trafficking problem in Sinai subsided, as a result of closing the border with Israel, the toughening of immigration laws and an increased army presence in Sinai. Migration flows shifted westwards towards Libya.”[7]

In parallel to these findings, the European Union has pursued an EU/Egypt Action Plan that includes “support effort to prevent and counter illegal migration into Egypt and the European Union.”[8] An EU contribution of 20 million euros will support the implementation of the Action Plan.[9] An additional “migration partnership framework and increased action along the Central Mediterranean route” also includes Egypt. Within this partnership, the EU has pledged 200 million euros for migration-related projects in Libya and North Africa throughout the EU Trust Fund. According to EU official documents “Discussions are under way to focus support on protection at disembarkation points and in detention centres, as well as support for alternatives to detention.”[10]

Academic researchers had noted an apparent correlation between European efforts to block migrant routes across the Mediterranean and increases in the trafficking of migrants across the Sinai desert. According to one study, between 2007 and 2013, as many as 30,000 people were trafficked in the Sinai.[11]

Are European Union funds used to “support” detention centres and are EU policies and agreements with Egypt contributing to the development of immigration detention policies and practices in the country? How are EU-supported interdiction efforts in Egypt jeopardizing the lives, well-being, and human rights of migrants and asylum seekers who are forced to change their routes to cross other, often more dangerous and lawless regions of the Mediterranean coast?

[9] SAAP III-Support to the Implementation of the Action Plan Programme and the Association Agreement – EU contribution 20 million euro., https://eeas.europa.eu/delegations/egypt/8745/saap-iii-support-implementation-action-plan-programme-and-assocaition-agreement_en