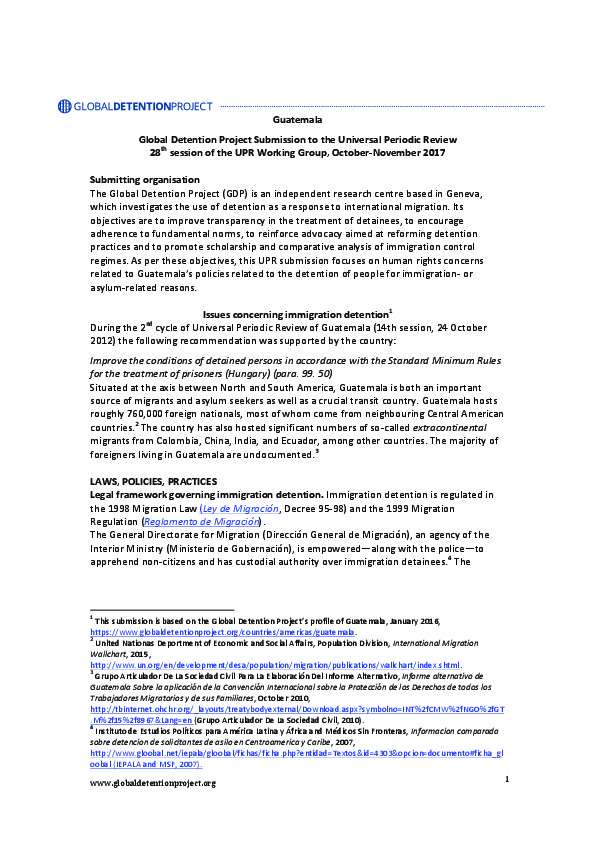 The Global Detention Project (GDP) is an independent research centre based in Geneva, which investigates the use of detention as a response to international migration. Its objectives are to improve transparency in the treatment of detainees, to encourage adherence to fundamental norms, to reinforce advocacy aimed at reforming detention practices and to promote scholarship and comparative analysis of immigration control regimes. As per these objectives, this UPR submission focuses on human rights concerns related to Guatemala’s policies related to the detention of people for immigration- or asylum-related reasons.

During the 2nd cycle of Universal Periodic Review of Guatemala (14th session, 24 October 2012) the following recommendation was supported by the country:

Improve the conditions of detained persons in accordance with the Standard Minimum Rules for the treatment of prisoners (Hungary) (para. 99. 50)

Situated at the axis between North and South America, Guatemala is both an important source of migrants and asylum seekers as well as a crucial transit country. Guatemala hosts roughly 760,000 foreign nationals, most of whom come from neighbouring Central American countries.[2] The country has also hosted significant numbers of so-called extracontinental migrants from Colombia, China, India, and Ecuador, among other countries. The majority of foreigners living in Guatemala are undocumented.[3]

The General Directorate for Migration (Dirección General de Migración), an agency of the Interior Ministry (Ministerio de Gobernación), is empowered—along with the police—to apprehend non-citizens and has custodial authority over immigration detainees.[4] The directorate has repeatedly been the target of corruption allegations.[5] Observers have criticized these laws for failing to provide procedural guarantees or adequate guidance on the application of discretion when treating undocumented migrants and asylum seekers. These legal lacunae, they argue, lead to arbitrary decision-making and enable corruption and abuse.[6]

Grounds for detention. Non-citizens who enter or stay in the country without authorization may be subject to a fine, deportation, or expulsion. Article 111 of the Migration Law provides that the Directorate General for Migration may “accommodate” (albergar) non-citizens who do not have required travel documents in designated centres (centros destinados especialmente para este fin), which are misleadingly called “accommodation centres” or “shelters” (centros de albergue).

According to some reports, immigration authorities systematically apply detention measures. [7] However, given the small numbers of officially reported detainees, it seems unlikely that all detected or apprehended undocumented travellers are placed in immigration detention. In fact, according to official statistics, in 2013, 273 non-citizens were placed in immigration detention (116 men and 157 women). The majority of detainees that year came from El Salvador (91), Nicaragua (60), Honduras (56), and India (30).[8] However, the number of detainees can be much higher because official statistics are scarce. For instance, according to the National Preventive Mechanism, between January and September 2016, 1,021 migrants from Africa were detained.[9]

Length of detention. The Migration Law does not set a limit to the length of detention. Those most impacted by this legal gap have been migrants and asylum seekers from outside the region—including people from India, China, Nepal, and Uzbekistan—whose home countries do not have consular representation in Guatemala.[10] People from South American countries like Ecuador, Peru, Bolivia, and Venezuela have also faced lengthy periods in immigration detention because their consular representatives refuse to assist in covering deportation costs.[11] Thus, while people from Central America are reportedly detained for at most a few days, migrants from other continents can be kept in the detention for up to 10 months.[12]

Procedural guarantees. Deportation procedures should involve a hearing (Migration Law, article 113). However, because the law does not explicitly mention the word “detention” the legislation lacks any provisions for reviewing detention measures. The legislation does not explicitly provide for the right to appeal, legal or linguistic assistance, or alternatives to detention. Although article 116 of the Migration Law vaguely mentions that appeals of migration-related decisions are regulated by the Law on Administrative Litigation, it is not clear whether detention is covered by this provision.[13] Reportedly, there is no judicial control over immigration detention and authorities are not willing to allow civil society organizations to provide legal assistance to detainees.[14]

Detainees are reportedly informed about the reasons they are in custody. Yet, this information is not necessarily conveyed in a language they understand. Guatemala’s main detention centre does not employ a translator so detainees do not have access to linguistic assistance.[15] Detainees can request privately paid legal advice.[16]

Vulnerable persons. Accompanied children are detained with their families while unaccompanied minors have generally been accommodated in alternative facilities. Until early 2009 undocumented children tended to be accommodated at Casa Allianza Guatemala during identification proceedings. Since the closure of the shelter due to lack of funds there apparently have been no places that can offer specialized care for unaccompanied children in irregular situation. These children appear to be accommodated in shelters for minors managed by the state or NGOs.[17]

Until December 2015, women victims of trafficking were accommodated in Albergue Luz de Esperanza, managed by the Social Welfare Secretariat. Since its closure, no other facility has been opened, raising the possibility that trafficking victims could end up being placed in detention centres.[18]

Access to detainees. The Human Rights Ombudsman (Procuraduría de los Derechos Humanos) appears to be one of the few institutions allowed to enter the detention centre in Guatemala City. However its access is reportedly limited.[19] In addition there are number of human rights organizations, including Mesa Nacional para las Migraciones en Guatemala (MENAMIG), that seek to assist migrants and detainees.

Cooperation with the United States. Guatemalan security services, including military and immigration officers, have collaborated for decades with U.S. officials to prevent and interdict irregular migration on land and sea. Reportedly since 2001, when Guatemala authorized the United State to patrol its Pacific coastline, the U.S. Coast Guard has played an integral role patrolling Guatemalan territorial waters and interceptions and detentions have reportedly gone up. [20] The U.S. collaboration resulted in Guatemala’s Naval Pacific Base being used as a place of detention, even though this is at odds with the Migration Law, which provides that the institution empowered to conduct migration-related operations is solely the Directorate General for Migration and the only detention facilities are designated “albergues.”[21]

Guatemala currently operates one albergue as a detention centre. The facility, which is located in “zona 5” of Guatemala City and has been in use since 2007, reportedly has a capacity of 100.[22] The centre confines women and men on the second and third floors, respectively. Both floors have a similar set-up and are divided in two sections, namely a common area that is equipped with tables and chairs, TV and air-conditioning and a sleeping area with have 25 bunk beds.[23] The building is secured by metal bars on the windows, electrical wires, and armed police officers.[24]

Conditions at the centre have repeatedly been criticized. In 2011, the UN Committee on Migrant Workers urged Guatemala to improve conditions at the facility, ensuring the provision of basic social services, including food, health care and hygienic conditions and to ensure that men and women are duly separated.[25] In 2008, the Defensoría de Población Desarraigada y Migrante of the Human Rights Ombudsman (Procuraduría de los Derechos Humanos) visited the centre and found serious shortcomings, including inadequate ventilation, lack of means of communication (telephones), insufficient recreation space, and inadequate rooms to meet consular representatives.[26]

Key priorities for Guatemala with regards to immigration detention:

[1] This submission is based on the Global Detention Project’s profile of Guatemala, January 2016, https://www.globaldetentionproject.org/countries/americas/guatemala.

[5] Isabel Rosales, “Public Officials and the Migration Industry in Guatemala: Greasing the Wheels of a Corrupt Machine,” in Thomas Gammeltoft-Hansen and Ninna Nyberg Sørensen (eds.), The Migration Industry and the Commercialization of International Migration, Routledge, 2013, 215-237.