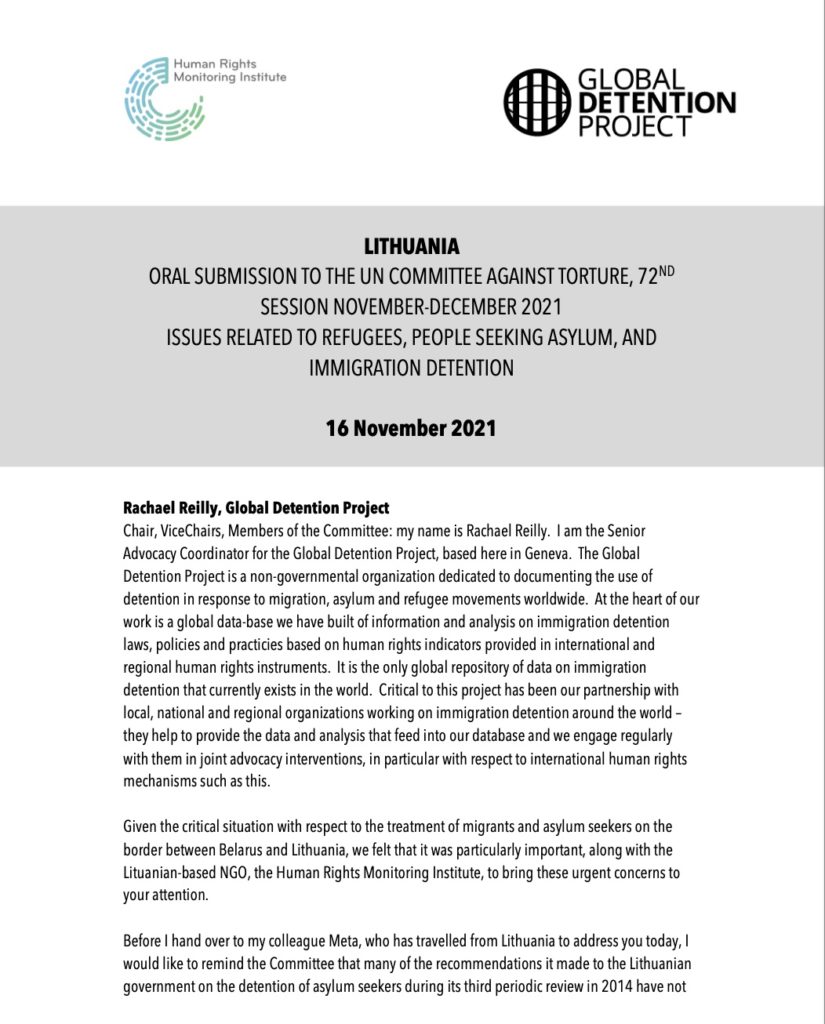 The Human Rights Monitoring Institute and the Global Detention Project presented reports about mistreatment and disappearances of migrants and asylum seekers detained near the border with Belarus at the 72nd Session of the Committee against Torture (CAT). See the joint oral statements, below. See also the written joint submission, here. CAT’s review of Lithuania and the Lithuanian delegation’s responses were aired on UNTV on 17 November 2021, available here.

Chair, ViceChairs, Members of the Committee: my name is Rachael Reilly.  I am the Senior Advocacy Coordinator for the Global Detention Project, based here in Geneva.  The Global Detention Project is a non-governmental organization dedicated to documenting the use of detention in response to migration, asylum and refugee movements worldwide.  At the heart of our work is a global data-base we have built of information and analysis on immigration detention laws, policies and practicies based on human rights indicators provided in international and regional human rights instruments.  It is the only global repository of data on immigration detention that currently exists in the world.  Critical to this project has been our partnership with local, national and regional organizations working on immigration detention around the world – they help to provide the data and analysis that feed into our database and we engage regularly with them in joint advocacy interventions, in particular with respect to international human rights mechanisms such as this.

Given the critical situation with respect to the treatment of migrants and asylum seekers on the border between Belarus and Lithuania, we felt that it was particularly important, along with the Lituanian-based NGO, the Human Rights Monitoring Institute, to bring these urgent concerns to your attention.

Meta can now speak directly to the situation in Lithuania and bring you up-to-date with the latest developments since we issued our joint written submission to the CAT a few weeks ago. Thank you.