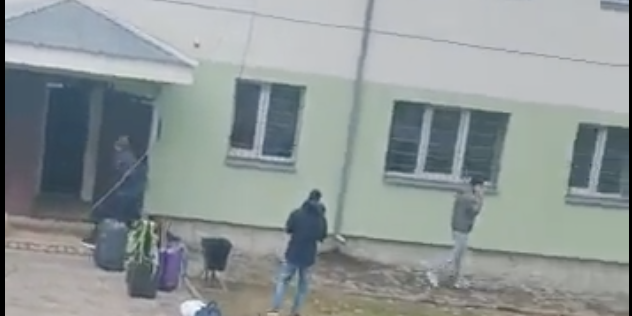 The GDP has received alarming reports detailing the detention of 44 non-nationals in Ukraine’s Volyn Detention Centre (Volyn PTPI) – despite the GDP having called for the release of detainees from the facility in March 2022. Conditions in the facility are reported to be dire, raising serious concerns for detainees’ safety and wellbeing.

Located in northwestern Ukraine and 100km from the border with Belarus, Volyn PTPI is reportedly detaining 44 non-nationals–42 men and two women. In our previous reports about Volyn, which were coordinated with media outlets and other civil society groups, we highlighted the grave plight of foreign nationals trapped at the detention centre who were unable to evacuate even as Russia’s war on the country reached nearby towns. Despite the reported release of some immigration detainees in Ukraine since then, the GDP is alarmed to learn that Volyn PTPI remains operational and that conditions in the centre remain appalling, even as concerns grow of a possible land invasion by Russian and Belarusian troops amassing on the Belarus border.

Much of Ukraine has been facing power outages in recent weeks as a result of Russian missiles targeting the country’s power-generating facilities. Volyn PTPI may also have been affected, with reports received by the GDP highlighting constant electricity cuts–with the facility’s management rarely turning on a generator–heating that is rarely on, extremely cold rooms, infrequent hot water supply, and disrupted cellular service. Combined with bitterly cold winter weather (this weekend, temperatures are expected to plunge to -12° in the area), the welfare of detainees is at grave risk. Already, several detainees are reported to be sick.

Previously, the GDP reported that detainees were mostly students and migrant workers from India, Pakistan, Afghanistan, Ethiopia, and Sudan who had been detained on immigration grounds and who were desperately trying to return to their own countries. The most recent reports received by the GDP, however, indicate a change in the profile of detainees. Today, they are principally ethnic Tatars, Dagestanis, Russians, Azerbaijanis, Armenians, and Uzbeks seeking asylum from political and religious persecution–and who would thus risk persecution or worse if “evacuated” to their home countries. Nevertheless, Ukrainian authorities likely view these nationals with suspicion and may assume that they are affiliated with an aggressor country during a state of war.

Ukraine’s continued detention of migrants and refugees violate international legal standards that underscore the necessity of releasing detainees in administrative detention in situations of on-going warfare. Additional Protocol 1, Article 58C, of the Geneva Conventions requires all parties to a conflict to take necessary measures to protect civilians under their control from the effects of war. It is also alarming that Russians, Tatars, Dagestanis, Azerbaijanis, Armenians, and Uzbeks, many of whom have fled persecution by Russian security services and whose lives and safety would be in extreme danger if deported to their countries, are being arrested, detained, and threatened with deportation from Ukraine.

Ukraine’s continued detention of migrants and refugees appear to violate international legal standards that underscore the necessity of protecting all civilians – citizens and non-citizens alike – in situations of on-going warfare. Amidst the ongoing suffering across Ukraine, it is crucial that the rights of refugees and asylum seekers caught up within the conflict are not overlooked.

Ukraine must consider immediately releasing all foreign nationals who are being detained for immigration reasons, in particular in light of on-going warfare on its territory. The international community must also engage this situation to help migration detainees find safety in accordance with their mandates and ensure that foreign nationals are not deported to places where they face a clear threat of persecution or harm.

Read more about the facility here.