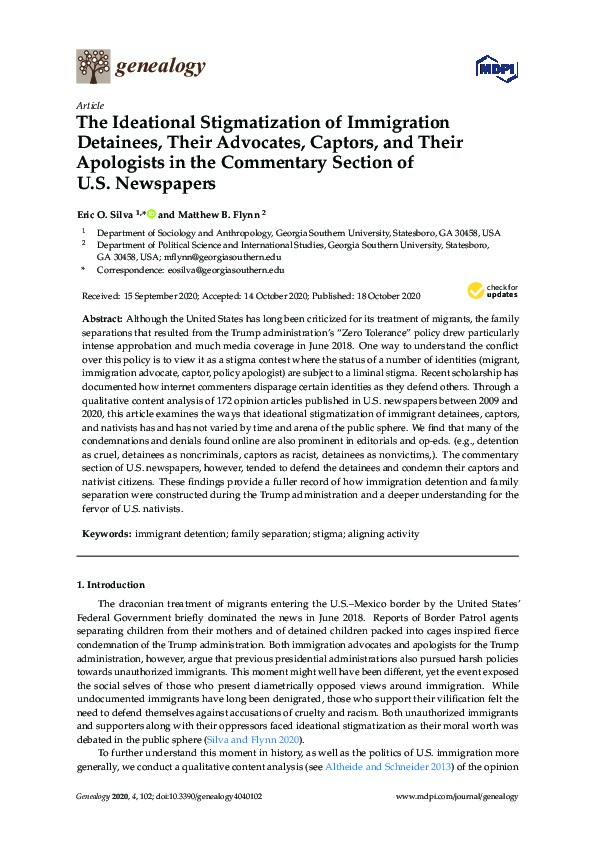 Although the United States has long been criticised for its treatment of migrants, the family separations that resulted from the Trump administration’s “Zero Tolerance” policy drew particularly intense approbation and much media coverage in June 2018. One way to understand the conflict over this policy is to view it as a stigma contest where the status of a number of identities (migrant, immigration advocate, captor, policy apologist) are subject to a liminal stigma. Recent scholarship has documented how internet commenters disparage certain identities as they defend others. Through a qualitative content analysis of 172 opinion articles published in U.S. newspapers between 2009 and 2020, this article examines the ways that ideational stigmatisation of immigrant detainees, captors, and nativists has and has not varied by time and arena of the public sphere. We find that many of the condemnations and denials found online are also prominent in editorials and op-eds. (e.g., detention as cruel, detainees as noncriminals, captors as racist, detainees as non-victims,). The commentary section of U.S. newspapers, however, tended to defend the detainees and condemn their captors and nativist citizens. These findings provide a fuller record of how immigration detention and family separation were constructed during the Trump administration and a deeper understanding for the fervour of U.S. nativists.