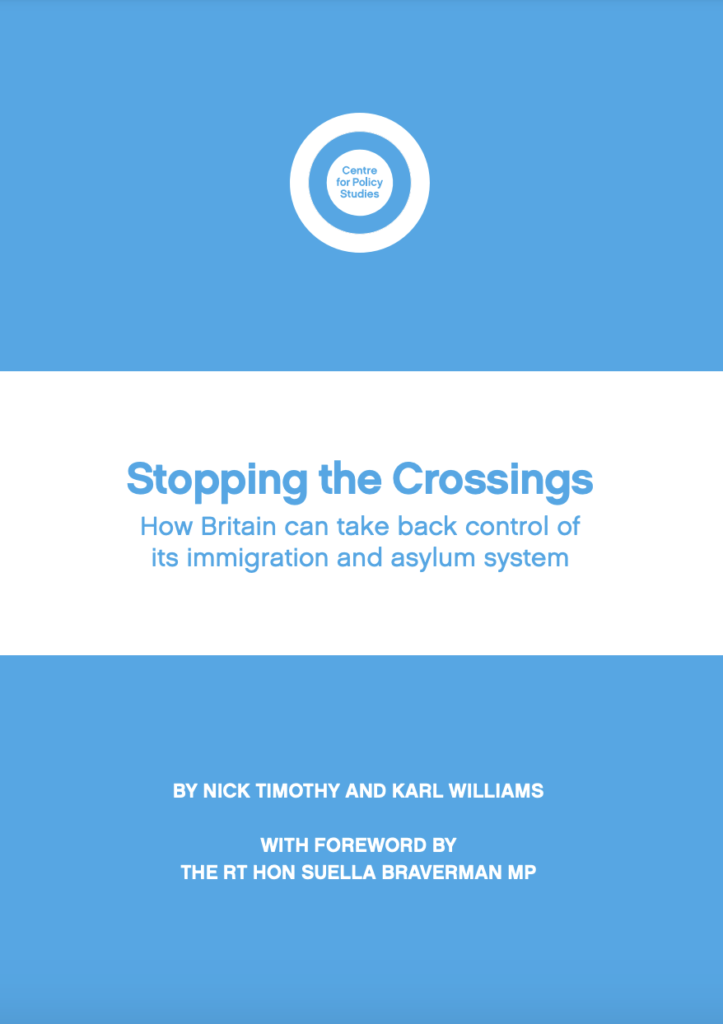 On Monday 6 December, the London-based Centre for Policy Studies (CPS) released a report containing proposals for UK asylum reform. Titled Stopping the Crossings: How Britain can take back control of its immigration and asylum system, the report is an unambiguous attempt to spur a “radical policy shift and decisive action” to cut the number of irregular migrants arriving in the country, regardless of the impact this has on migrants, refugees, and asylum seekers, or UK’s domestic and international legal obligations.

The authors of the report appear to have worked strategically with UK Home Secretary Suella Braverman—who has described the report as a “vital and necessary contribution to the policy debate”—to ensure its widespread public impact.

Many of the report’s suggestions are directly relevant to the country’s detention policies. These include: introducing Australian-style offshore detention; automatic detention of all “illegal” arrivals; a massive increase in detention capacity; and legislative reforms to permit “open-ended” detention.

Within hours of publication, the report and its proposals were vigorously condemned by UNHCR for their “factual and legal errors regarding the international legal status of refugees and asylum seekers.”

In this GDP perspective piece, we take a close look at Australia’s notorious immigration detention system to illustrate the realities of the CPS’ cruel and extreme proposal, highlighting the immense harm such policy changes would inflict. As we wrote in a report published earlier this year concerning Australia’s detention practices, titled “Immigration Detention in Australia: Turning Arbitrary Detention into a Global Brand,”: “Australia’s migration-related detention system is uniquely severe, arbitrary, and punitive. And that is precisely the message that Australia’s political establishment—with significant public support—appears committed to communicating to the rest of the world. Deplorable and abusive immigration detention conditions and practices abound in many countries in the world; Australia, however, brings together a range of extreme policies in its detention regime, provides them blanket legal cover, aggressively defends them in the face of growing international opprobrium, and spreads them to countries near and far.”

The fact that the UK is today seeking to revive and propagate this discredited Australian model is deeply worrying and requires a concerted response across the entire range of civil society and human right practitioners working at all levels, domestically, regionally, and globally.

“As a matter of principle, no immigrant who arrives here illegally should ever, under any circumstances, be allowed to settle in Britain. In particular, it should be impossible in law to claim asylum in Britain after travelling from a safe country.” (CPS p.85)

The CPS proposes that the UK replicate the controversial Australian immigration policy (the “Pacific Solution”) of interdictions at sea, turn-back of boats, and mandatory offshore detention of asylum seekers who enter Australia “illegally,” and claims it is a successful model of how a country can stem “illegal” arrivals of asylum seekers and migrants.

Efforts to replicate offshore detention and asylum processing policies, such as those used by Australia and the United States, are not new in the UK. As the GDP’s Executive Director, Michael Flynn, highlighted in a 2014 report on the export of immigration detention policies, Tony Blair flirted with the idea in 2003—two years after Australia proposed its Pacific Solution—suggesting the establishment of transit processing centres on the non-EU side of Europe’s borders. His proposal, however, was shot down by other EU states, notably Germany who described the proposed centres as “concentration camps.” The idea of offshore processing has been revisited several times since.

A former UN High Commissioner for Human Rights, Navi Pillay, commented when visiting Australia in 2011 that its policy of mandatory, arbitrary detention had “for many years cast a shadow over Australia’s human rights record.” Pillay declared: “There is a racial discriminatory element here which I see as rather inhumane treatment of people, judged by their differences: racial, colour or religions.”  The former High Commissioner for Human Rights, Michelle Bachelet, also stressed during her visit to Australia in 2019: “Desperate human beings seeking safety and dignity are victims, not criminals; they are people just like us— tired and in need. And they are moving—many of them—because they have no other choice.”

Australia has become an international pariah in its treatment of refugees and asylum seekers arriving at its shores. Is this really the model the UK wants to emulate and the global reputation it hopes to obtain?

“Open-ended detention in communal accommodation, such as Napier Barracks, should be made the norm for asylum seekers and illegal entrants awaiting relocation to Rwanda or their country of origin.” (p. 9)

“Once an illegal immigrant is identified and located, there should be a presumption of detention until deportation. The capacity of detention facilities will need to be increased accordingly, perhaps by the development of Ministry of Defence estates.” (p. 72)

“Parliament should change the law to permit the open-ended detention of illegal immigrants.” (p. 72)

According to the CPS, detention should be “open-ended” and the capacity of detention facilities should be increased. This would require the overturn of the Hardial Singh principles which provide important protections—such as the fact that individuals may only be detained for the purpose of deportation, that a detainee can only be held for a period that is reasonable in all circumstances, and that if deportation cannot occur during a reasonable period, detention is not longer valid.

As the GDP has previously reported, Australia has no such protections in place, and “open-ended” detention has resulted in excessively lengthy detention. The average length of detention in the country is 700 days, and at least 50 asylum seekers have been in detention for more than eight years.

Prolonged detention like this in isolated facilities with poor conditions, lack of communal and outdoor space, and extreme uncertainty about the future has had catastrophic impacts on the physical and mental well-being of detainees, resulting in severe physical and mental health problems, serious psychological illness and high rates of self-harm, suicide attempts, and deaths by suicide of detainees.

The Centre for Policy Studies argues for a massive increase in the UK’s detention facilities to accommodate the mandatory detention of all asylum seekers who arrive in the UK “illegally” while they await deportation to their country of origin, a safe-third country, or an offshore processing facility. The report acknowledges the increased costs in expanding the UK’s detention estate:

“This would require a significant increase in the capacity of detention facilities, reversing the 40% decline between 2015 and 2020, and require significant extra spending, likely to total £170m a year on top of current annual expenditure.” (p.70)

But this estimate likely wildly under-represents the true cost increases associated with the CPS’ proposals. As the GDP has documented, Australia’s mandatory onshore and offshore detention policies entail vast costs. According to the 2020-2021 Australian immigration budget data, the costs of Australia’s policies include:

In contrast, it costs less than AUD 50,000 to house a person in the community.

In a time of budget crisis, increased food and energy prices, restricted public funding, and rising debt, it is questionable whether the UK has this kind of budget to spend on costly immigration controls.

“The law should be changed to allow the tagging and better tracking of any illegal immigrants who are not held in detention facilities. They should face automatic recall to detention where there is evidence of non-compliance with reporting or tagging conditions.” (p.72)

Electronic tagging or monitoring of detainees represents a costly and intrusive measure that fails to meet the UK’s human rights obligations. Tagging detainees and tracking their movements implies a continuing deprivation of liberty and restriction of their freedom of movement, further criminalising persons—many of whom have already suffered abuses and persecution.

In many countries—such as the United States—these devices have been used to increase harmful surveillance of asylum seekers over extended periods of time while having no appreciable impact on reducing the use of immigration detention. This was highlighted by the GDP in a recent presentation to the UN Committee on Migrant Workers: “Recent results from the US Alternatives to Detention (ATD) programme reveal a disconcerting picture of a growing ATD surveillance programme that has no appreciable impact on the numbers of people placed in detention: As of 2020, there were some 92,000 people in ATD programs, while 183,000 were placed in detention. By 2021, the ATD program had grown to include 136,000 people, who had been under some form of ATD surveillance for on average 615 days, while the numbers of people in detention grew to 189,000 people.”