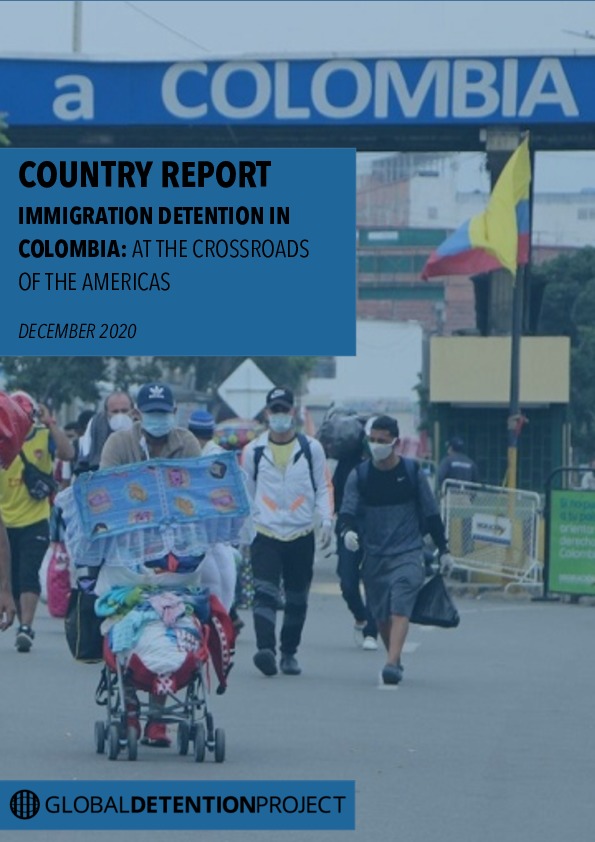 Located at the juncture between South and Central America, Colombia has become an important transit point for migrants and asylum seekers from across the Americas and elsewhere in the world. It is also a key destination for Venezuelans fleeing the turmoil in their country, hosting more than 1.3 million by 2019. During 2010-2014, a national plan was implemented to “strengthen immigration control in Colombia” and in 2013 the country opened its first temporary immigration holding facilities (salas transitorias de migración). During the COVID-19 pandemic, which hit Colombia severely, large numbers of Venezuelans who had lost their jobs became stranded in makeshift camps located in border zones when they sought to return home.

Historically, Colombia has been a country of emigration as interminable conflict, poor infrastructure, and persistent economic turmoil drove many to leave the country and dissuaded foreigners from settling there. As recently as 2005, the country’s census revealed that non-citizens comprised a meagre 0.26 of the population.

More recently however, the country’s geographic location as the only land gateway between South and Central America has resulted in it becoming a critical transit point for many migrants and asylum seekers wishing to reach North America. Colombia has also received people from Africa and Asia who have flown to countries with lax visa policies such as Ecuador, before travelling overland through Colombia. And since 2004, the country has become a destination for large numbers of Venezuelan migrants and refugees. According to UNHCR, approximately 1.3 million Venezuelans were reported to be in the country in mid-2019.

The country’s evolving migratory profile was acknowledged by the Minister of Foreign Affairs in July 2019, when he introduced a new immigration policy (Proyecto de ley por medio del cual se establece la política migratoria del Estado Colombiano), saying: “Colombia remains primarily a migrant issuing country. However, it is also a recipient and transit place for thousands of foreign citizens, including Venezuelan citizens who in recent years have entered Colombia in search of better economic conditions, assistance and protection from the political and social situation in their country.”

Shortly after the CMU’s establishment, Colombian media reported in 2013 that new temporary immigration holding facilities (salas transitorias de migración, STMs)would be established in the country. Reports indicated that a total of seven STMs would be opened: one each in Guajira, Cartagena, Medellín, Bogotá, Cúcuta, and two in Pasto. These facilities, it was reported, would detain foreigners for up to 36 hours while authorities decide on deportation or other immigration measures. In 2019, the country reported that it was operating 11 STMs.

To-date, the GDP has been unable to independently verify the location and status of these facilities. However, reports have highlighted the detention of migrants in the country, with some observers claiming that immigration detention measures are used “frequently.” In 2015 there were several cases of Cuban migrants being detained, and in March 2016, following the apprehension of 17 undocumented migrants, the CMU’s director announced that “there is no way the Cubans can stay in Colombia. … What we are going to do is to receive them and keep them in temporary migrant holding facilities for 36 hours, where accommodation and food will be provided.” More recently, in 2019, Colombia reported to the UN Committee on Migrant Workers (CMW) that its STMs had confined 2,911 foreign nationals in 2018.

In 2020, the Colombian government took steps to regularise the status of migrants. One of the first measures adopted was the creation of a new Special Permanence Permit (Permiso Especial de Permanencia, PEP), which would benefit an estimated 200,000 Venezuelans. Another measure adopted was the creation of the “Special Permanence Permission for the Promotion of Formalisation” (Permiso Especial de Permanencia para el Fomento de la Formalización), a work permit that would be granted to Venezuelan citizens in Colombia with a job offer.

Nevertheless, during the COVID-19 pandemic, large numbers of Venezuelan migrant workers—many of whom lost their sources of employment amidst the economic downturn—sought to return to their country of origin. But with borders closed, and Venezuela permitting only 400 people to return three days a week (according to UNHCR, 100 per day via the Arauca border crossing, and 300 per day in Cucuta), large groups were left stuck in makeshift migrant camps in border areas. There were reports of migrants, including children, being exposed to severe overcrowding, inadequate sanitation and medical provision, and raw sewage and waste. Venezuelan President Nicolas further aggravated the situation when he wildly claimed that Venezuelans returning from abroad were being used as “biological weapons,” deliberately infected by foreign governments in an effort to spread COVID-19 across Venezuela. Colombia categorically rejected these accusations, calling them deplorable.