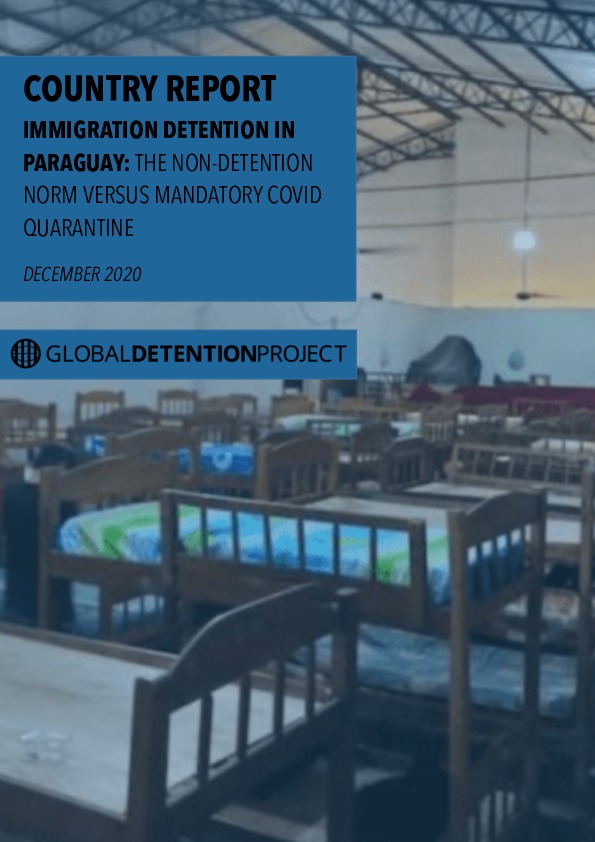 Paraguay has not emphasised detention in its immigration policies nor has it established a formal immigration detention system. While the law provides for the detention of non-nationals for migration-related reasons—to ensure expulsion—it appears to be rarely applied. There is little information, however, about how often people are detained or the conditions of their detention. After the onset of the COVID-19 pandemic, thousands of people—mainly returning Paraguayan migrant workers but also including a handful of arriving asylum seekers—were confined in unsanitary state-run quarantine facilities, where observers report they faced inhumane conditions.

Paraguay has traditionally been a country of emigration rather than of immigration. Following the War of the Triple Alliance (between Paraguay and the Triple Alliance of Argentina, Brazil, and Uruguay, ending in 1870), in which approximately 60 percent of the population died, authorities sought to promote and encourage immigration to the country. In its first post-war National Constitution of 1870, it noted: “American and European immigration will be encouraged and it will not be possible to restrict, limit, or impose any tax on the entry of foreigners who come to the country with the aim of improving industries, working the land, or that will teach science and the arts.” This provision was kept without many changes until 1996, when new immigration legislation introduced limitations to obtaining temporary or permanent residence permits.

In recent years, as Paraguay’s economy has steadily grown (in 2017, the country saw a 4.9 percent growth rate), there has been a slow increase in the number of migrant arrivals. As of 2019, 160,000 migrants were reported to be in the country—representing approximately 2.3 percent of the population—most of whom were from Brazil and Argentina. Also, recently the country has begun to have a growing population of Venezuelans fleeing turmoil in their country, who numbered roughly 3,500 by the end of 2019.

Like many of its South American neighbours, Paraguay does not have a dedicated detention system. While the country’s law provides for the detention of non-nationals for migration-related reasons—specifically, to ensure expulsion—people are placed in prisons and police stations.[5] It remains unclear, however, whether non-nationals are separated from people imprisoned for criminal prosecution or the extent to which detention measures are used in immigration proceedings.