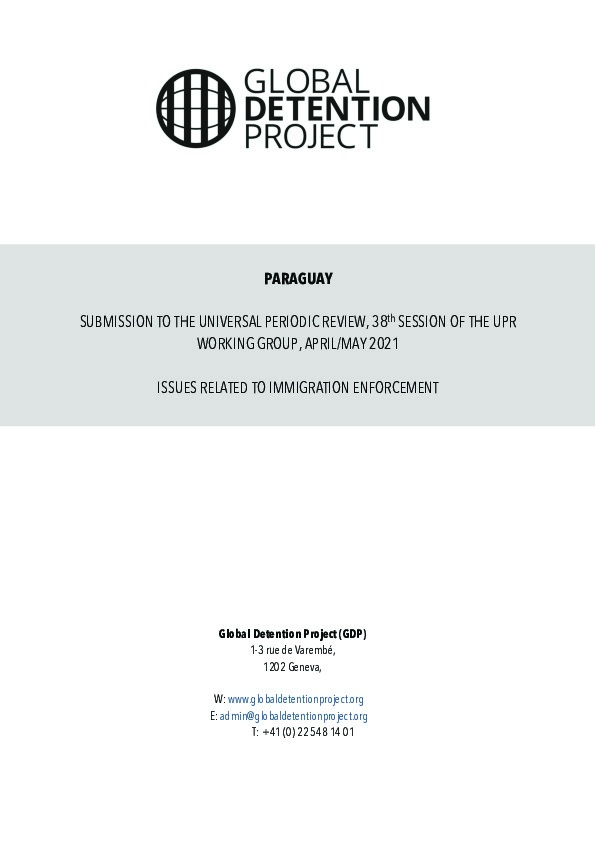 1.1 Paraguay has not traditionally been a country of concern with respect to the treatment of migrants, refugees, or asylum seekers. This is reflected in the fact that during the previous two UPR cycles, there were no relevant recommendations made to the State party, other than the recommendation that it withdraw its reservation to Articles 76 and 77 of the International Convention on the Protection of the Rights of All Migrant Workers and Members of Their Families (ICMW) (concerning complaint procedures) (see “2. Recommendations during the 2nd Cycle of UPR).

1.2 However, the COVID-19 pandemic requires a renewed scrutiny of this issue. As the GDP has observed during its monitoring of government practices regarding non-nationals during the pandemic,[i] in many contexts the crisis has increased non-nationals’ vulnerability to detention and deportation for migration-related reasons, despite the hazards these activities imply for people in enforcement proceedings.

1.5 Under Article 83 of the IL, in cases of expulsion, the “judicial authority can order the detention of the non-national for the minimum time necessary to ensure that the expulsion is conducted within the time period set by the competent authority that has decided the expulsion.” Further, according to Article 84 of the IL, the Paraguayan immigration authority (Dirección General de Migraciones or DGM) is only entitled to order the expulsion of a non-citizens in the cases provided by Article 81(1); (3) and (4). Article 81 provides that the competent authority will resolve the expulsion of a non-citizen in the following cases: (1) when the person has entered the country clandestinely; (3) when the person remains in the country after the expiration of the authorised period of stay; and (4) when the person remains in the national territory once their residence permit has been cancelled and will not leave the country by the given deadline.

1.6 In response to the COVID-19 pandemic, Paraguay took specific measures concerning non-citizens, including prolonging the validity of permits that expired after 13 March 2020, and suspending the issuing of fines for persons who overstay.[iii]

1.7 Paraguay has continued to enforce deportations during the crisis despite calls to halt these measures during this time.[iv]  The country’s Immigration Service (Dirección General de Migraciones, DGM) confirmed to the GDP that deportations had continued, although not to destinations where border closures prevented returns. The DGM highlighted cases of Brazilians who were deported for unspecified reasons, as well as non-nationals residing in border areas (such as Ciudad del Este and Pedro Juan) who were ordered to leave the country for breaking quarantine rules.[v]

1.8 Thousands of people are reported to have been held in state-run quarantine facilities that observers have highlighted as unsanitary, and which are exposing thousands of returning Paraguayan migrants to “inhumane conditions without adequate food, water and medical care.”[vi] According to Amnesty International, by late May authorities had established 84 quarantine centres (in warehouses and other buildings such as schools), and as of late June 2020 more than 8,000 persons—mostly Paraguayan migrants returning from Brazil, having lost their jobs as a result of the pandemic—had been mandatorily quarantined in these facilities. Reports indicate that some persons have been held for far longer than the recommended 14 days, and that at the start of the crisis at least, conditions were inappropriate and lacked basic facilities. Since June, observers have noted improvements in conditions. More recently, many quarantine facilities have reportedly been closed.[vii]

2.1 During the 2nd cycle of the Universal Periodic Review of Paraguay (32nd session, January 2016), Paraguay agreed to examine several recommendations relevant to its immigration enforcement practices.[viii] These included:

3. RECOMMENDATIONS FROM OTHER HUMAN RIGHTS BODIES

3.1 Since Paraguay’s second periodic review, the UN Human Rights Committee has recommended that authorities ensure that national legislation on immigration, including the country’s Refugee Law, are “consistent with the Covenant and other international standards, and take the legal and administrative measures necessary to this end.”[ix]

[iv] UN Network on Migration, “Forced Returns of Migrants Must be Suspended in Times of Covid-19,” 13 May 2020, https://www.unicef.org/press-releases/forced-returns-migrants-must-be-suspended-times-covid-19