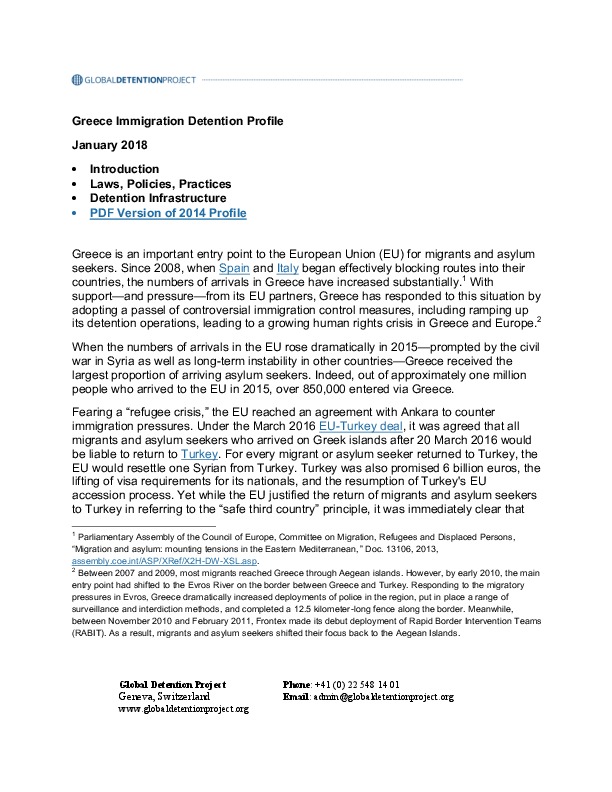 Immigration Detention in Greece (2018 Report) Greece is a key focus in Europe’s efforts to halt irregular migration flows. However, the country’s immigration detention laws and practices have been repeatedly denounced by observers, who have pointed to numerous abuses, including the systematic use of detention of vulnerable migrants and asylum seekers, the failure to apply alternatives to detention, appalling conditions in detention facilities, and the use of police stations for immigration detention purposes. View the Greece Immigration Detention Profile Page.

Introduction to the 2018 Report

Greece is an important entry point to the European Union (EU) for migrants and asylum seekers. Since 2008, when Spain and Italy began effectively blocking routes into their countries, the numbers of arrivals in Greece have increased substantially. With support—and pressure—from its EU partners, Greece has responded to this situation by adopting a passel of controversial immigration control measures, including ramping up its detention operations, leading to a growing human rights crisis in Greece and Europe.

When the numbers of arrivals in the EU rose dramatically in 2015—prompted by the civil war in Syria as well as long-term instability in other countries—Greece received the largest proportion of arriving asylum seekers. Indeed, out of approximately one million people who arrived to the EU in 2015, over 850,000 entered via Greece.

Fearing a “refugee crisis,” the EU reached an agreement with Ankara to counter immigration pressures. Under the March 2016 EU-Turkey deal, it was agreed that all migrants and asylum seekers who arrived on Greek islands after 20 March 2016 would be liable to return to Turkey. For every migrant or asylum seeker returned to Turkey, the EU would resettle one Syrian from Turkey. Turkey was also promised 6 billion euros, the lifting of visa requirements for its nationals, and the resumption of Turkey’s EU accession process. Yet while the EU justified the return of migrants and asylum seekers to Turkey in referring to the “safe third country” principle, it was immediately clear that Turkey would not fulfil the criteria to be considered safe for refugees. The EU-Turkey deal ultimately diverted the migration flow to Italy and in 2016 arrivals to Greece decreased to 170,000.

To implement the EU agreement with Turkey, Greece converted reception centres on five Aegean Islands into closed (or “secure”) facilities and adopted a policy of “geographical restriction.” Pursuant to this measure, migrants and asylum seekers are today no longer transferred to the Greek mainland. Rather, they are obliged to remain on the island on which they are initially registered and undergo a fast-track border procedure to determine whether Turkey is a “safe country” for them. However, due to administrative delays, many migrants and asylum seekers find themselves stranded on the Aegean islands for months. Numerous reports have denounced appalling conditions in the centres, including severe overcrowding, insufficient food supply and medical care, and a lack of protection from violence.

Greece’s immigration detention practices more generally raise several concerns, including: the country’s resistance to using alternatives to detention; its systematic detention of children; the issuing of detention orders that lack individual assessments; inadequate conditions of detention; and the use of police stations for immigration detention purposes. For these reasons, Greece’s detention system has attracted broad international condemnation—including from four UN Special Procedures and four UN human rights treaty bodies —and have prompted more than 20 rulings by the European Court of Human Rights. In addition, a number of the Geneva-based treaty bodies criticized Greece’s practices. In 2015, for example, the UN Human Rights Committee urged Greece to ensure that all detention decisions be based on the individual circumstances of the person and consider less invasive means to achieve the same end.9 Previously, in 2012, the Committee against Torture recommended that Greece ensure that administrative detention on the grounds of irregular entry not be applied to asylum seekers and that they should be detained only in exceptional circumstances or as a measure of last resort, on grounds specifically prescribed by law.