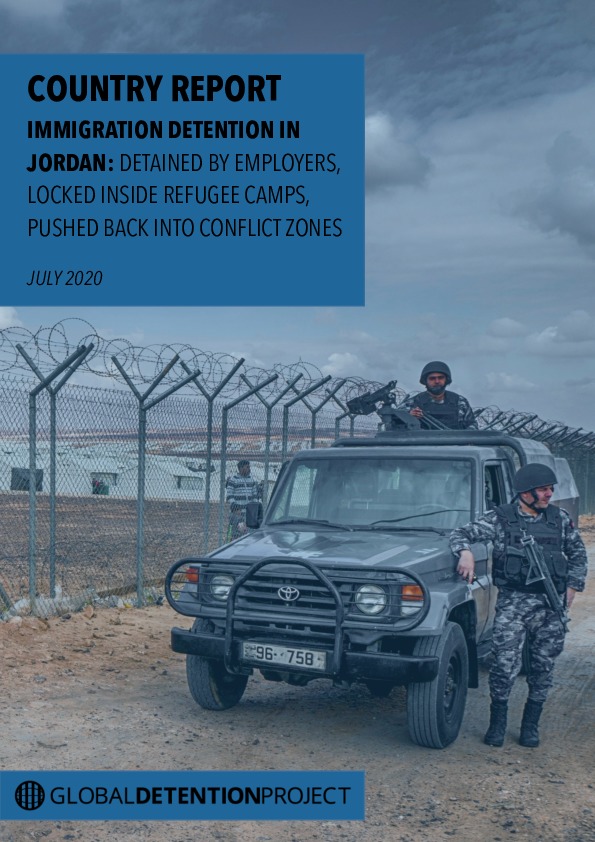 Jordan has long played an important role in hosting refugees from neighbouring Arab states and has the second-largest share of refugees per capita worldwide. Although the country has at times been praised for its reception practices, arrests, forced deportations—including into the Syrian conflict zone—and poor conditions of detention remain critical concerns. Jordan is also home to some 100,000 migrant workers, who face enormous barriers to securing basic rights and are particularly vulnerable to arbitrary arrest and detention—including at the hands of their employers.

Throughout its history, the Kingdom of Jordan has witnessed first-hand the impact of successive crises in neighbouring states. Soon after the kingdom’s creation in 1921, millions of Palestinians, forcibly displaced from what is now Israel, settled in in the kingdom. More than two million Palestinians continue to reside there—almost 370,000 of whom live in one of 10 recognised Palestinian refugee camps. More recently, new waves of refugees began arriving from Iraq during the Gulf War of 1991 and following the 2003 U.S.-led invasion and occupation of Iraq, as well as Syrians since 2011. Today, the country hosts the second largest population of refugees per capita worldwide.

Although the country has been praised for its role in hosting these waves of refugees, detentions and forced deportations—including into the Syrian conflict zone—as well as poor detention conditions, have been persistent problems, according to human rights groups and refugees. In one report, Human Rights Watch (HRW) documented Jordanian officials summarily expelling Syrians across the border, including collective expulsions of entire families. According to the rights watchdog, those deported were denied the opportunity to challenge their deportation and authorities failed to assess their need for international protection.

Some observers have also argued that conditions in the country’s Syrian refugee camps, hastily established to house those fleeing the conflict next door, amount to de facto detention due to the restrictions on freedom of movement that are imposed.

Home to more than 76,000 refugees as of January 2020, Zaatari (also Zatari) camp—which opened in July 2012—is one of the largest camps in the Middle East and has become the country’s third-largest “city.” When asked if Zaatari should be considered a detention camp, one non-governmental observer told the GDP: “Yes, it’s a kind of detention as refugees are not allowed to leave and when they do they are arrested by police and detained in an administrative detention centre before being deported back to the camp.” In 2012, HRW described the facility as a “refugee holding centre without any options for release other than return to Syria,” noting the protection gap between official policies towards Palestinian refugees from Syria versus Syrian refugees in Jordan.

To accommodate the growing number of Syrian refugees, a new camp was opened in 2014 in Azraq, some 60 kilometres east of Amman. Mainly housing Syrian refugees who fled the advances of the Islamic State (IS) group in central and eastern Syria after 2013, Azraq is reportedly a highly securitised camp where access is severely restricted due to concerns that it has been infiltrated by Islamic State (IS). Media reports indicate that one part of the camp, called “Village 5,” effectively “locks up” those inside, including children and families. A media account about the camp reported in November 2019: “The camp is split into ‘villages.’ The village-based approach aims to foster a greater sense of ownership and community among residents. But living conditions are tough—temperatures soar to over 40 degrees in the summer and plummet at night. There are no trees, flowers or birds, but rows of temporary metal shelters with only the most basic of facilities. What is meant to be a temporary shelter is becoming the only home ever known for many children living in Village 5.” The economist Richard Davies (Extreme Economies, 2020), who has written about the situation in Azraq, compares Village 5 to the restrictive Zaatari camp, saying that “at Zaatari it’s kind of young guys with rifles, kind of slung relaxed way around their shoulder. To get into Azraq requires a lot of paperwork; and the guys on the front have got huge kind of submachine-gun, military grade weaponry. So it’s not a place you can go for anything more than a short visit.”

Cyber City, another camp near the northern Jordanian city of Ramtha, also resembles a detention facility. While camp residents are granted visits by relatives and NGOs, the only choice to actually permanently leave Cyber City is through returning to Syria. Most of the camp’s residents are Palestinian refugees from Syria (PRS), who face legal vulnerabilities as a result of their pre-existing Palestinian refugee status before secondary displacement from Syria after 2011.

Conditions in these camps—as well as the Palestinian refugee camps established in the wake of 1948 and 1967, which are now dense urban settlements—drew widespread scrutiny during the 2020 Covid-19 crisis. In particular, observers were concerned that their dense living areas would fuel large outbreaks. The lock-down measures that were implemented across the country to contain the virus’s spread were similarly imposed inside the country’s refugee facilities. With no means of leaving the camps, some refugees reported a reduced supply of essential goods and services.

According to UNHCR, as of 31 January 2020, there were 745,673 registered Syrian refugees in the country. Other reports, meanwhile, suggest that the total number of registered and unregistered refugees may be closer to 1.3 million. Sources in Jordan previously said that few Syrians were able to get work permits, with one count placing the number at 6,000 as of 2015. However, more recent reports appear to indicate that the number of Syrians with work permits has grown. Those caught working without authorisation are vulnerable to arrest. EU-Jordanian cooperation designed to support Syrian and vulnerable host communities in Jordan have made some small improvements for Syrian refugees working in the country. However, endemic socio-economic challenges remain that will likely deteriorate as Jordan’s economy continues to struggle—particularly in the wake of the Covid-19 crisis.

Since the 1970s, Jordan has also attracted large numbers of semi-skilled and low-skilled migrant workers filling demand within the agriculture, construction, and service industries. Many of these labourers, particularly those from Asia, are employed in Qualifying Industrial Zones (“QIZ’s”)—large industrial parks operating as special free trade zones in collaboration with Israel that take advantage of the free trade agreements between the United States and Israel. Tens of thousands of foreign nationals—mostly Filipinos, Indonesians, and Sri Lankans—are employed as domestic workers (the government estimates that there are 70,000 migrant domestic workers while non-governmental sources put the number at nearly 100,000). As has been well documented, domestic workers in Jordan, as in neighbouring Gulf states, are a highly exploited social group who face enormous barriers to securing basic rights and are particularly vulnerable to arbitrary arrest and detention stemming from their working environments.

Although the Kafala sponsorship system, which binds domestic migrant workers to their designated employers in Gulf states, is not mentioned in Jordanian legislation, in practice the situation does not appear to be significantly different. According to a report on Jordan by the Swiss Agency for Development and Cooperation: “Many migrant workers are subjected to violations of their rights by their employers and recruiters through withholding of passports, restrictions on movement, non-payment of wages, long working hours, unpaid overtime, contract substitution, no days off, threats of imprisonment, and verbal, physical or sexual abuse.”

In addition to authorised workers, Jordan’s Labour Ministry has estimated that several hundred thousand foreigners work in the country without permits. However, such statistics are difficult to verify because reliable data are not maintained regarding foreign workers in the country. Estimates vary wildly, with some reports suggesting that there are as many as 1.5 million foreign workers—both documented and undocumented. This would represent nearly a quarter of Jordan’s total population of 6.5 million.

Not including the country’s “closed” refugee camps, Jordan does not appear to operate specialised immigration detention facilities. Instead, it employs police stations and prisons for such purposes, the conditions of which are reportedly “generally poor.” The number of non-nationals detained in such facilities is also reported to have grown in recent years, particularly in the wake of rising socio-economic demands amongst Jordanian workers and continuing anti-austerity protests. According to one lawyer interviewed by the Global Detention Project, non-Syrian refugees and asylum seekers have been increasingly targeted for working illegally in Jordan since the end of 2018, around the same time as a renewal of anti-austerity protests.