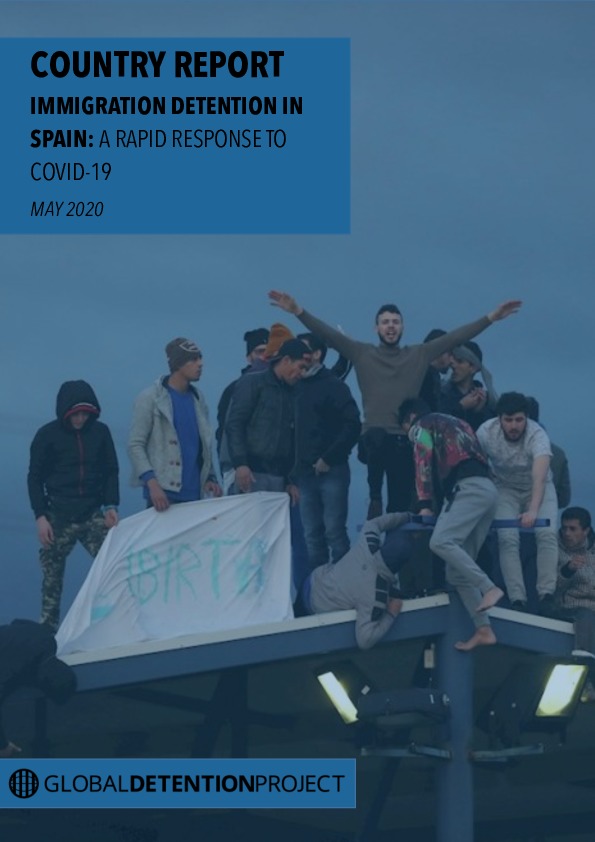 On 6 May 2020, Spain reported that for the first time in its history, its long-term immigration detention facilities, “Foreign Internment Centres,” were empty. These centres had long been the target of activists, local politicians, and human rights bodies, who argued that they were unnecessary and abusive. The Covid-19 crisis, which shut down deportation flights, provided a final push. But enormous questions remain, including what is to happen to these facilities if the crisis eventually passes, how are former detainees being cared for, and what is being done to protect the thousands of people stranded in Spain’s Moroccan enclaves, where nominally “open” reception centres were placed under lockdown.

As countries across the eastern and central Mediterranean have ramped up controls along migratory routes, Spain has become an increasingly important entry point into Europe. While Frontex, the EU’s border agency, reported that by 2018 overall detections of unauthorised border-crossings into the EU had reached their lowest level in five years (“92 percent below the peak of the migratory crisis in 2015,”) between 2017 and 2018, Spain experienced a twofold increase in entries. By 2019, these arrival trends started to decline, from 65,400 in 2018 to 32,500 in 2019; however, asylum requests skyrocketed from 54,050 in 2018 to 117,800 in 2019.

Spain’s responses to these pressures have fluctuated. In June 2018, when Malta and Italy refused to allow the Aquarius—a rescue ship carrying more than 600 migrants and asylum seekers—to dock, Spain offered a safe harbour to the boat and its passengers. Less than a year later, in early 2019, the Spanish government proposed a plan to reduce irregular immigration by 50 percent by ending active rescue patrols along the Mediterranean coast and prohibiting NGO rescue boats from docking. Although the country’s Interior Ministry walked back this proposal, the government unveiled a new strategy ahead of the 2019 EU election aimed at reducing arrivals, including by tasking the country’s military police—the Guardia Civil—with control of sea rescue and increasingly relying upon Morocco’s coastguard to intercept vessels.

The call for increased reliance on Morocco to interdict migrant vessels is part of Spain’s broader efforts to “externalise” immigration controls to nearby countries in Africa, which date back more than a decade. This has included EU and Frontex assistance in interdicting boats en route to the Canary Islands, financing detention operations in Mauritania, and facilitating cooperation between police forces from Senegal to Morocco on migration control. Critics have argued that increased efforts by Spain and the EU to block migratory routes have led to increased rights violations and international human rights bodies have scrutinised Spain’s responsibility for violations that may result from these efforts.

The land borders surrounding Spain’s two enclaves in Morocco, Ceuta and Melilla, have also witnessed violent confrontations for many years, as Spanish and Moroccan police attempt to stop people from crossing into Spanish territory. The deaths of asylum seekers during these confrontations have drawn attention to the practice of summary returns—“hot returns” or “push-backs” (devoluciones en caliente). Controversially, in February 2020 the European Court of Human Rights (ECtHR) ruled that Spain had acted lawfully when it summarily deported two people who had tried to scale the border fence in 2014. While the two individuals argued that they were not given the opportunity to explain their circumstances or receive assistance from translators or lawyers, the ECtHR ruled that no violation had occurred. Experts warned that this would set a dangerous precedent, encouraging Spain and other countries to continue summary deportations. The head of the European Centre for Constitutional and Human Rights commented that “it will be perceived as a carte blanche for violent push-backs everywhere in Europe.”

Conditions in the country’s “Foreigner Internment Centres” (centros de internamiento de extranjeros – CIEs) have long been the subject of scrutiny and criticism. The poor treatment of detainees in some facilities and the perceived inadequacy of detention as a response to migration and refugee challenges have spurred doubts about the need to maintain Spain’s large network of detention centres. Local authorities in several cities—including Madrid, Barcelona, and Valencia—have been key supporters of this campaign, resulting in a confluence of agendas between activists and local officials.

In 2018, several episodes—including a series of protests and riots at the Aluche CIE in Madrid, with one in October 2018 leading to the injury of 11 police officers and one detainee—placed the country’s detention estate under intense scrutiny. On the other hand, courts, the Ombudsman (Defensor del Pueblo), and NGOs that monitor places of detention recorded improvements in conditions of detention during this time, including better access to health, asylum processing, and information.

After the emergence of the Covid-19 pandemic, Spain was one of the first states in Europe to release immigration detainees. With flights grounded, it was quickly apparent that expulsions would no longer be possible and that many detention orders had thus lost their legal justification, prompting the Spanish Ombudsman to comment on 19 March that in these circumstances, “[immigration detainees] must be released.” By 5 April 2020, there were only 34 persons detained throughout Spain’s CIEs, and as of 21 April the Barcelona, Tenerife, Hoya Fria, Aluche, and Barranco Seco CIE’s were temporarily closed. By 6 May, Spain announced that its CIEs were completely empty.

Although the Spanish government adopted measures on 20 March 2020 to guarantee that migrants and refugees in the country may benefit from the country’s protection system, the GDP found little information detailing the situation that released detainees faced upon release, or the level of support that they received.

Although Spanish authorities took steps to mediate the impact of Covid-19 on immigration detainees in mainland Spain, few measures appear to have been adopted in the country’s North African enclaves. Reports indicated that in Melilla, persons held in temporary detention facilities (Centros de Estancia Temporal de Inmigrantes – CETIs) faced overcrowding, a lack of protective measures, and insufficient information from Spanish authorities. Spain’s Defensor del Pueblo (Ombudsman) released a statement detailing concerns for the wellbeing of those held inside CETIs—particularly children—and urged authorities to transfer persons from such facilities to the Spanish mainland.