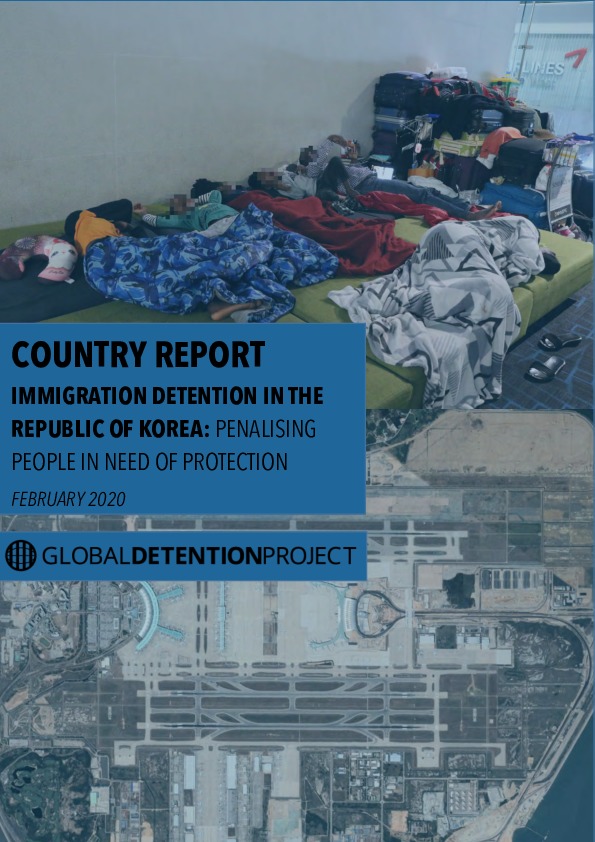 Over the last two decades, South Korea has implemented increasingly restrictive asylum and migrant worker policies. Although the government does not provide adequate data about immigration detention, making it challenging to assess trends in the country, observers have reported that in recent years this crackdown has grown in scale and intensity. Children, victims of trafficking, and other vulnerable groups can be subjected to indefinite detention, often in facilities where detainees have reported instances of abuse; asylum seekers can find themselves stranded for months in privately operated airport “holding areas”; and national and international human rights bodies have repeatedly called for reforms in the country’s immigration detention centres.

Immigration policy in South Korea (the Republic of Korea) is characterised by tensions between the need for unskilled migrant workers and the objective of controlling the influx of unauthorised immigrants and asylum seekers. The government began stepping up efforts to curb undocumented migration in the early 1990s, but lack of consensus between different actors resulted in the restrained implementation of certain policies. In the early 2000s, however, the government started to systematically arrest, detain, and deport irregular migrants. According to observers in South Korea, this crackdown has recently grown in scale and intensity.

In 2009, the National Human Rights Commission of Korea (NHRCK) concluded that immigration arrest and detention procedures frequently violated provisions in the Universal Declaration of Human Rights, the International Covenant on Civil and Political Rights (ICCPR), and the UN Principles for the Protection of All Persons under Any Form of Detention or Imprisonment. A more recent investigation by the NHRCK, in 2017-2018, led to renewed calls for improving respect for the human rights of immigration detainees. The commission recommended easing the carceral trappings of detention centres, taking steps to limit the use of solitary confinement, providing detainees with access to the internet, improving training of staff, and increasing exercise time, among other measures.

In October 2019, the South Korean Immigration Service announced that it would begin reinforcing measures aimed at preventing unauthorised employment “where encroachment on the domestic job market as well as impediment to the Korean culture are concerned.” The notice stated that undocumented migrants must leave the country within six months or face deportation as well as having their information shared with the government of their country of origin. Those who do not comply would also be subject to re-entry bans for a maximum of 10 years. People caught working in the construction industry illegally can be subject to the “One Strike Out” policy, which results in immediate deportation.

Also in 2019, the government adopted a policy called “Preliminary Declaration of Voluntary Departure,” which requires undocumented migrants to declare their intention to depart 15 days prior to their departure date. Previously, undocumented people who wanted to leave the country did not have to make a prior declaration before they departed.

To justify increasingly hard-line immigration policies, Korean authorities point to growing migration and asylum pressures. By the end of 2018, according to official statistics, the number of foreigners living in South Korea had risen to 2.7 million. The largest population was from China (1.1 million, or 45 percent), followed by Thailand (8.4 percent), Vietnam (8.3 percent), the United States (6.4 percent), Uzbekistan (2.9 percent), and Japan (2.6 percent).

The increase in asylum seekers appears to have spurred some particularly harsh measures. For instance, in May 2018, after some 500 Yemeni nationals sought asylum on Jeju Island, a self-governing Korean province with an independent visa policy, the government banned the refugees from entering the mainland pending the results of their refugee status determination procedure. The move was widely criticised by civil society organisations for stoking racist, anti-refugee sentiment. As of early 2019, only two of the applicants had been granted refugee status while another 56 had been ordered to leave Korea and some 400 had been granted temporary “humanitarian stay” permits.

Despite the clear trend in hardening immigration and asylum policies, it is difficult to accurately account for detention and removal practices because of the government’s failure to publicly release information and statistics. One source in Korea from the organisation Advocates for Public Interest Law (APIL) told the Global Detention Project (GDP) that although the Ministry of Justice releases detailed statistics concerning the number of foreigners who have been imprisoned for criminal offenses, it does not include in its annual report data about people placed in immigration detention. In responding to freedom of information requests, officials have only provided partial data, such as statistics for individual detention centres (see: 2.14 Transparency and access to information).

The bit of information that has been publicly released appears to show a downward trend in certain forms of immigration detention. In particular, the number of people in long-term detention (more than six months) decreased from 44 in 2017 to 20 in 2018. A lawyer for APIL told the GDP that this decrease “is not based on foreigners’ human rights or systematic remedies, but is arbitrarily done by the immigration office.” He added that currently the Ministry of Justice “is taking an attitude of prompt deportation or using temporary release at its own discretion more frequently to reduce the number of long-term immigration detainees.”