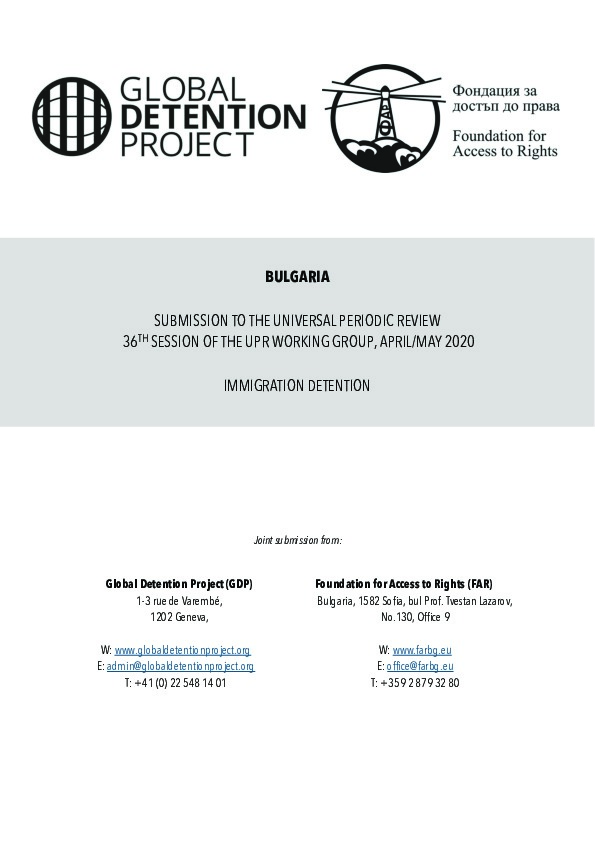 The Foundation for Access to Rights (FAR) is a Bulgarian non-governmental organization founded in the public interest with the following objectives: establishment of effective mechanisms to guarantee access to rights in practice and effective protection against arbitrary deprivation of rights; increasing the institutional and public awareness, sensitivity and commitment to the need to address systemic problems in access to basic human rights in Bulgaria; development of a favourable legislative environment in line with European and International standards for the protection of human rights and the establishment of best practices on access to rights.

This submission focuses on human rights concerns relating to Bulgaria’s policies on detention of refugees, asylum seekers, and migrants.

Bulgaria has served as a transit country into the European Union (EU). While it received an important number of arrivals during the refugee “crisis,” the number of irregular non-citizens apprehended in the country has decreased dramatically, including a 90 percent drop between 2015 and 2017.[1] Despite this decrease, immigration detention has remained a key tool in Bulgaria’s response to migration and asylum flows, in addition to other measures such as the construction of a border fence.

Bulgaria, which has the lowest gross domestic product per capita in the EU, has spent some 85 million EUR on a razor-wire fence along its south-eastern border to prevent irregular crossings. Described as a “temporary fence facility” by the government, it stretches for over 236 km along the country’s border with Turkey.[2] Many migrants, asylum seekers, and refugees have experienced pushbacks back into Turkey, a practice that numerous human rights bodies have denounced.[3] Bulgarian border control has been bolstered by the deployment of the European Border and Coast Guard (formerly Frontex) along its land borders with Turkey and Serbia. In 2017, this was comprised of “126 officers (including crew members of the deployed assets) supported by 6 thermo-vision vehicles, 38 patrol cars, 1 CO2 detector, 39 smartdeck cameras and 3 mobile offices.”[4]

A 2019 report on the treatment of asylum seekers in four frontline EU countries, which was produced by several European NGOs—including the GDP, the FAR, and the Hungarian Helsinki Committee (HHC)—found that “Exceptional measures of a temporary character” like mass detention have become “normalised” in Bulgarian public discourse. The report noted the contradictory rationales used to characterise these measures, which are presented as a “humanitarian” response even as officials describe the actions as protecting the public from national security threats.”[5]

Recommendations during the 2nd cycle of UPR

During the 2nd cycle of the Universal Periodic Review of Bulgaria (22nd session, May 2015), the following recommendations were accepted by the country:

Recommendations from other human rights bodies and current concerns

Following his visit to Bulgaria in 2015, the Council of Europe’s Commissioner for Human Rights called on the country to immediately cease the detention of persons pending registration of their asylum claims, avoid detention of asylum seekers, use pre-removal detention only as a last resort, for the shortest possible period of time, and on the basis of individual assessment, and first consider the applicability of alternatives to detention. He also reiterated that migrant children, both accompanied and non-accompanied, should never be detained as detention is not in their best interest.[6]

In 2016, the UN Committee on the Rights of the Child recommended that Bulgaria avoid any form of detention of asylum seekers under the age of 18 and families with children and consider all possible alternatives to detention prior to detention.[8]

In 2017 the UN Committee on the Elimination of Racial Discrimination urged Bulgaria to stop practice of automatic detention of asylum seekers, apply alternatives to detention, ensure due process and fair trial guarantees, and investigate and sanction all cases of excessive use of force by law enforcement officials in detention.[9]

Following its visit to Bulgaria in 2017, the European Committee for the Prevention of Torture urged the country to sanction all instances of ill-treatment of immigration detainees by staff, prevent inter-detainee violence, improve material conditions of detention (in terms of overcrowding, state of repair, hygiene, provision of personal hygiene items) and health care, and ensure constructive recreational activities as well as legal and linguistic assistance.[10]

In 2018, the UN Human Rights Committee recommended that Bulgaria avoid detaining asylum seekers, except as a last resort and for the shortest period possible, provide effective alternatives to detention and reduce the length of immigration detention. Further, any detention should be justified as necessary and proportionate and subject to period judicial review and immigration detainees should have access to qualified legal aid when the interests of justice so require.[11]

In the 2019 report of the Council of Europe’s Committee for the Prevention of Torture (CPT)[12], the delegation “found that there had been hardly any change in the provision of health care to detained foreign nationals,” the main concern being “the very poor access to psychiatric care, limited in fact to emergencies.”[13] The Committee called upon Bulgarian authorities to improve the level of psychological assistance to foreign nationals detained at Busmantsi and Lyubimets, including the provision of professional interpretation.”[14]

In addition to these immigration detention-related concerns, the GDP and FAR have identified the following on-going issues that may merit attention:[15]

[1] V. Ilareva, “Advocacy Report on the “Red Line” Detention of Asylum Seekers upon Entry in Bulgaria,” Foundation for Access to Rights (FAR) / European Programme for Integration and Migration (EPIM), July 2018, https://bit.ly/2PJlfZM; see also: Hungarian Helsinki Committee et al, “Crossing a Red Line: How EU Countries Undermine the Right to Liberty by Expanding the Use of Detention of Asylum Seekers Upon Entry,” February 2019, https://www.globaldetentionproject.org/crossing-red-line

[5] Hungarian Helsinki Committee et al, “Crossing a Red Line: How EU Countries Undermine the Right to Liberty by Expanding the Use of Detention of Asylum Seekers Upon Entry,” February 2019, https://www.globaldetentionproject.org/crossing-red-line

[6] Commissioner for Human Rights, “Report by Nils Muizniek Following his Visit to Bulgaria from 9 to 11 February 2015,” Council of Europe, https://rm.coe.int/ref/CommDH(2015)12

[7] Office of the High Commissioner for Human Rights, “Jailing Migrants is not the Solution to Bulgaria’s Migration Challenges – Zeid,” United Nations, 11 August 2016, https://bit.ly/2POR3Yn

[8] UN Committee on the Rights of the Child (CRC), “Concluding Observations on the Combined Third to Fifth Periodic Reports of Bulgaria, CRC/C/BGR/CO/3-5,” 21 November 2016, https://bit.ly/2N1M8Tt

[9] UN Committee on the Elimination of Racial Discrimination (CERD), “Concluding Observations on the Combined Twentieth to Twenty-Second Periodic Reports of Bulgaria, CERD/C/BGR/CO/20-22,” 31 May 2017, https://bit.ly/2IqepQk

[12] CPT, Report to the Bulgarian Government on the visit to Bulgaria carried out by the European Committee

[13] CPT, Report to the Bulgarian Government on the visit to Bulgaria carried out by the European Committee

[14] CPT, Report to the Bulgarian Government on the visit to Bulgaria carried out by the European Committee