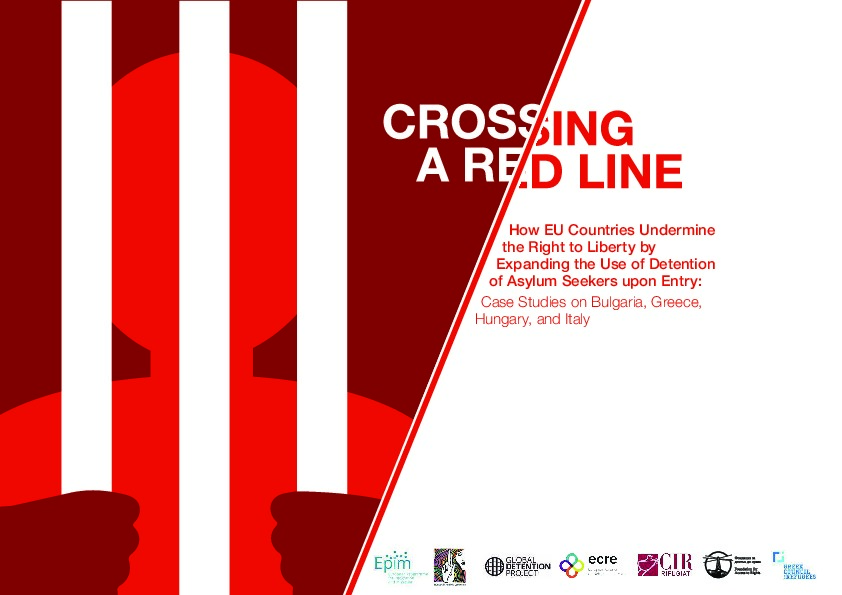 In February 2019, the Hungarian Helsinki Committee (HHC) along with several partner organisations, including the Global Detention Project (GDP), launched the final report of their joint initiative, the Red Line project, whose objective is to document and raise awareness of how EU states’ border “reception” procedures are increasingly used for the detention of asylum seekers. Initially launched in 2017, the project received financial support from the European Programme for Integration and Migration (EPIM) and involved NGOs in Hungary (HHC), Bulgaria (Foundation for Access to Rights), Greece (Greek Council for Refugees), and Italy (Italian Council for Refugees).

The final report, “Crossing a Red Line: How EU Countries Undermine the Right to Liberty by Expanding the Use of Detention of Asylum Seekers upon Entry,” is based on assessments made by project partners of how the morphing of “reception” into “detention” at the borders of their countries is undermining asylum seekers’ right to liberty. The GDP’s role was to assist the project in using UN human rights mechanisms, like the Working Group on Arbitrary Detention, to raise awareness of these trends at the international level. In addition, the GDP worked individually with each national partner to use the GDP’s online database, the Global Immigration Detention Observatory, to develop comprehensive detention data profiles of each country’s key immigration detention-related indicators as well as operations at the main detention centres covered in the report (links to these data profiles are provided below).

The Red Line detention report was launched at an event hosted at Quaker House in Brussels on 6 February 2019, which included presentations by each country partner in addition to presentations by Elina Steinerte, vice-chair of the UN Working Group on Arbitrary Detention; Judith Sargentini, member of the European Parliament; the GDP’s Michael Flynn; ECRE’s Minos Mouzourakis; and HHC’s Gruša Matevžič.