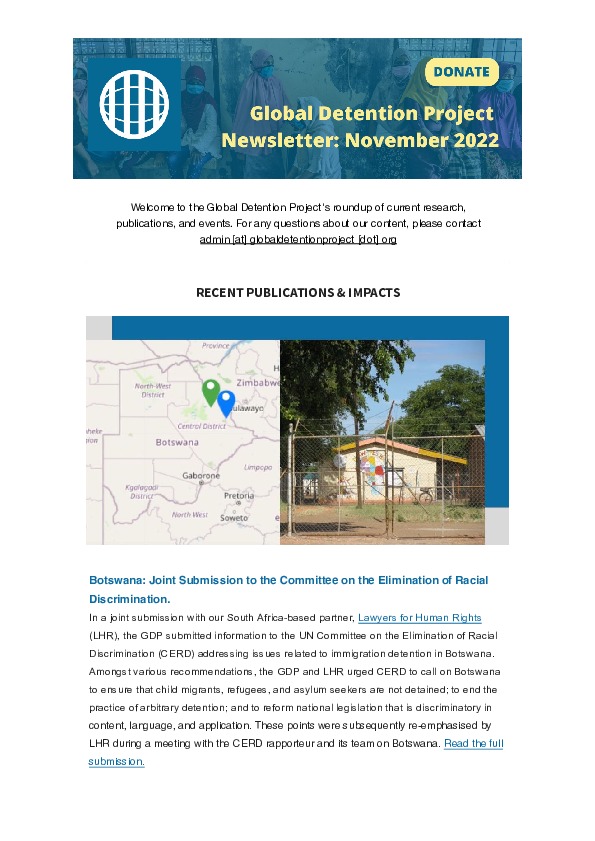 Botswana: Joint Submission to the Committee on the Elimination of Racial Discrimination

In a joint submission with our South Africa-based partner, Lawyers for Human Rights (LHR), the GDP submitted information to the UN Committee on the Elimination of Racial Discrimination (CERD) addressing issues related to immigration detention in Botswana. Amongst various recommendations, the GDP and LHR urged CERD to call on Botswana to ensure that child migrants, refugees, and asylum seekers are not detained; to end the practice of arbitrary detention; and to reform national legislation that is discriminatory in content, language, and application. These points were subsequently re-emphasised by LHR during a meeting with the CERD rapporteur and its team on Botswana.  Read the full submission here.

As part of the GDP’s efforts to ensure that local detention conditions receive global detention, in September the GDP welcomed representatives from Gulf-based Migrant-Rights.org and India-based Migration and Asylum Project to Geneva. Their visit, part of their collaboration with the GDP’s “Global Immigration Detention Observatory” project, was organised to facilitate interaction with key human rights mechanisms and experts so that they could bring international attention to detention-related concerns in their respective regions. Meeting with key bodies such as the UN Committee on Migrant Workers, the Working Group on Arbitrary Detention, and UNHCR, both partners raised key issues relating to the treatment of migrants and refugees in their respective countries and the increased use of immigration detention as a tool of migration management. Read more about their visit here.

The GDP’s partner in Turkey—the International Refugee Rights Association (IRRA)—has submitted three freedom of information (FOI) requests to Türkiye’s Presidency of Migration Management regarding the country’s immigration detention practices. The access to information requests were issued as part of IRRA’s participation in the Global Detention Project’s “Global Immigration Detention Observatory” project, which seeks to build empirical data and information about immigration detention systems around the world. As of November 2022, the GDP and IRRA had not received a response. FOIAs have also been sent to government agencies in the UAE by Migrant-Rights.org, but no response has yet been received.

Latest on the Immigration Detention Monitor

In our recent updates to the Immigration Detention Monitor, we have highlighted issues including arbitrary detention and forced deportations in southern Egypt, the “catastrophic overcrowding” and “grotesque treatment” at the UK’s Manston Processing Centre, tensions at the border between Slovakia and Czechia, Israel’s treatment of Russian and Ukrainian refugees, and arbitrary detention in Latvia. Read the blog here.

In Case You Missed It

The GDP has launched its first-ever individual-giving fundraising campaign. For more than a decade, our small but dedicated team has relentlessly investigated the treatment of immigration detainees, documenting when, where, and in what conditions they are held. Donations will support our efforts to end arbitrary and indefinite migration-related detention; ensure that children and other at-risk migrants, asylum seekers, and refugees are never detained; expose harmful detention practices; demand justice for people who have been unjustly detained; and promote the respect and dignity of all non-citizens. Donate now.

WHO: World Report on the Health of Refugees and Migrants

The World Health Organisation’s first ever report on refugee and migrant health, launched in July, brings together key evidence about the multitude of health challenges faced by refugees and migrants. Key to health considerations are the various impacts of immigration detention, with many cases of deaths, suicides, and cases of self-harm attributed to a failure to provide adequate health care and to poor detention conditions. The report’s chapter on immigration detention (pp. 66-68), which was drafted by the GDP’s Executive Director, explores this deeply concerning trend and highlights the various ways in which detention impacts health outcomes. Read more.

GDP On the Record

“Immigration Detention and De Facto Detention – What Does the Law Say?” PICUM, October 2022.

“Migration in Europe and the Problems of Undercriminalisation,” EU Law Analysis, October 2022.

“War, Displacement, and Human Trafficking and Exploitation: Findings From an Evidence-Gathering Roundtable in Response to the War in Ukraine,” E. Cockbain, Journal of Human Trafficking, October 2022.

“Reasons for the Activation of the Temporary Protection Directive in 2022: A Tale of Double Standards,” ASILE Project, October 2022.

“Migrating Through the Corridor of Death: The Making of a Complex Humanitarian Crisis,” P. Solano et al, Journal on Migration and Human Security, September 2022.

“War, Displacement, and Human Trafficking and Exploitation: Findings From an Evidence-Gathering Roundtable in Response to the War in Ukraine,” E. Cockbain and A. Sidebottom, Journal of Human Trafficking, October 2022.