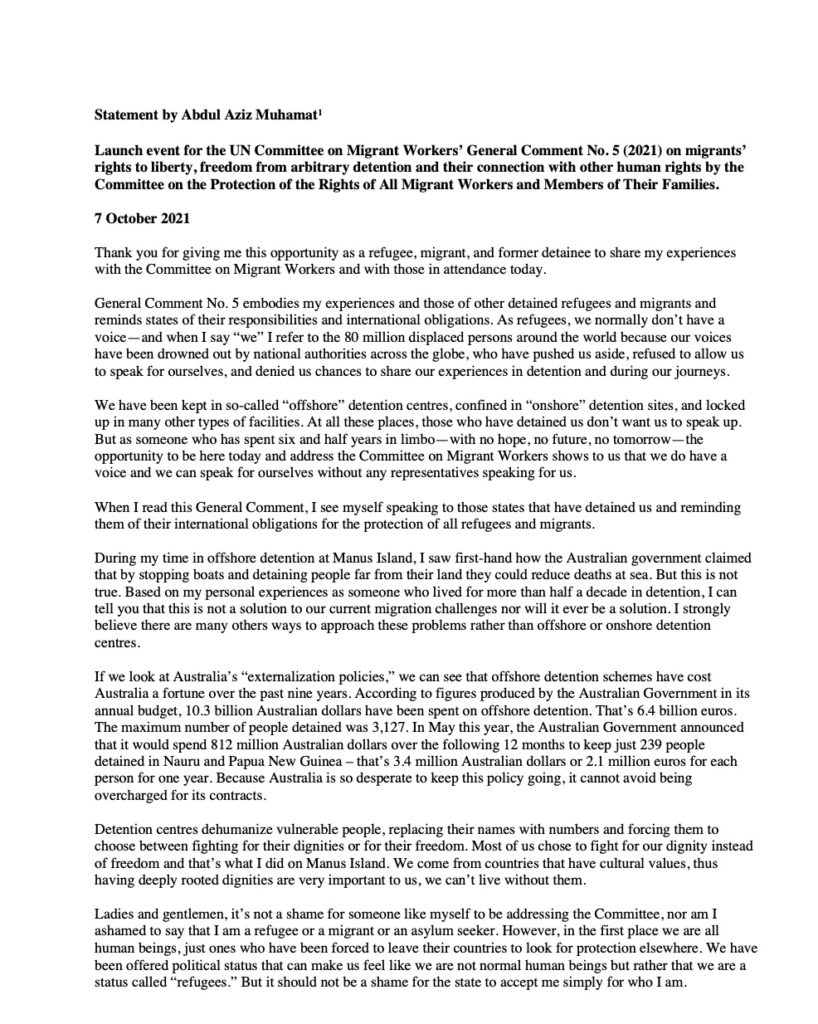 Thank you for giving me this opportunity as a refugee, migrant, and former detainee to share my experiences with the Committee on Migrant Workers and with those in attendance today.

General Comment No. 5 embodies my experiences and those of other detained refugees and migrants and reminds states of their responsibilities and international obligations. As refugees, we normally don’t have a voice—and when I say “we” I refer to the 80 million displaced persons around the world because our voices have been drowned out by national authorities across the globe, who have pushed us aside, refused to allow us to speak for ourselves, and denied us chances to share our experiences in detention and during our journeys.

We have been kept in so-called “offshore” detention centres, confined in “onshore” detention sites, and locked up in many other types of facilities. At all these places, those who have detained us don’t want us to speak up. But as someone who has spent six and half years in limbo—with no hope, no future, no tomorrow—the opportunity to be here today and address the Committee on Migrant Workers shows to us that we do have a voice and we can speak for ourselves without any representatives speaking for us.

When I read this General Comment, I see myself speaking to those states that have detained us and reminding them of their international obligations for the protection of all refugees and migrants.

During my time in offshore detention at Manus Island, I saw first-hand how the Australian government claimed that by stopping boats and detaining people far from their land they could reduce deaths at sea. But this is not true. Based on my personal experiences as someone who lived for more than half a decade in detention, I can tell you that this is not a solution to our current migration challenges nor will it ever be a solution. I strongly believe there are many other ways to approach these problems rather than offshore or onshore detention centres.

Detention centres dehumanize vulnerable people, replacing their names with numbers and forcing them to choose between fighting for their dignities or for their freedom. Most of us chose to fight for our dignity instead of freedom and that’s what I did on Manus Island. We come from countries that have cultural values, thus having deeply rooted dignities are very important to us, we can’t live without them.

Ladies and gentlemen, it’s not a shame for someone like myself to be addressing the Committee, nor am I ashamed to say that I am a refugee or a migrant or an asylum seeker. However, in the first place we are all human beings, just ones who have been forced to leave their countries to look for protection elsewhere. We have been offered political status that can make us feel like we are not normal human beings but rather that we are a status called “refugees.” But it should not be a shame for the state to accept me simply for who I am.

But we now face other challenges, like when I say that I am a refugee or a migrant, I can see that some people don’t see me as a normal person but rather they focus on my political status and it really undermines our abilities to do something. We shouldn’t look at people’s political status; instead, let’s look at them as equal human beings who are ready to share love and care with their host communities.

From this event I would like to send out a clear message to EU members states who are considering to replicate the Australian offshore policies and who look at it those policies as a successful solution: Make no mistake that those policies are a complete failure. Although those men and women who have been detained in offshore detention are not asked for their opinions on this because they are invisible, they have been completely damaged mentally and physically and there’s nothing left to talk about.

Offshore detention has destroyed Australia’s international reputation in the nine years since the offshore detention policy was reintroduced. Australia has been criticized on many occasions at the UN Human Rights Council, by UNHCR, by international leaders, and the world’s media. When Australia had its Universal Periodic Review in January this year, 45 UN member states used the very brief time they had to criticize or question Australia’s offshore detention policies. This criticism has also resulted in further scrutiny of other human rights issues in Australia, particularly its treatment of indigenous people and the country’s history of a race-based immigration policies, the White Australia Policy. The heartlessness of offshore detention also undermines Australia’s reputation in the eyes of millions of its own people. The politicians who have implemented it have left their country much more deeply divided.

Offshore detention has also undermined Australia in other important ways, including in its relationships with other resettlement states who have been sold the idea that offshore detention was going to be such a deterrent that people would stop coming to seek refuge. It didn’t work. 3,129 people have arrived in Australia since July 2013 when Australia declared that no refugee who arrived by boat from that date would ever be allowed to settle in Australia. Of those people who sought asylum, 73 percent – 2,294 people according to estimates from the Refugee Council of Australia – have been found to be refugees. If none of those 2,294 refugees are allowed to settle in Australia, where will they go?

For every person denied their rights Australia must find another country willing to let them resettle. So far, 1,012 refugees have been resettled to other countries – 977 of them to the United States. 53 recognized refugees have been so broken by offshore detention that they have gone home – supposedly voluntarily. That leaves 1,229 refugees who still need to find a resettlement country, more than eight years after they were first detained. Australia is not even halfway through finding countries willing to take the refugees it detained. How many more years is going to take to find homes for the remaining 1,229 refugees?

There are many ways to respond effectively to refugee and migration crises, but surely detention is not one of them. When we put vulnerable people in detention, we end up creating two communities: one for refugees, the other for the hosts—us vs them—and the conflict of misunderstanding begins. Instead, we should offer refugees a permanent resettlement that will allow them to be reunited with their families and contribute to their new communities. We all have tremendous power to change the lives of others and to help the world become a more diverse and accepting place to live, one in which we can all tell our stories. The best thing we can do for ourselves and the world is to listen to each other.

* Abdul Aziz Muhamat is a Martin Ennals Award Laureate for Human Rights Defenders (2019) and a Fellow at the Global Detention Project.