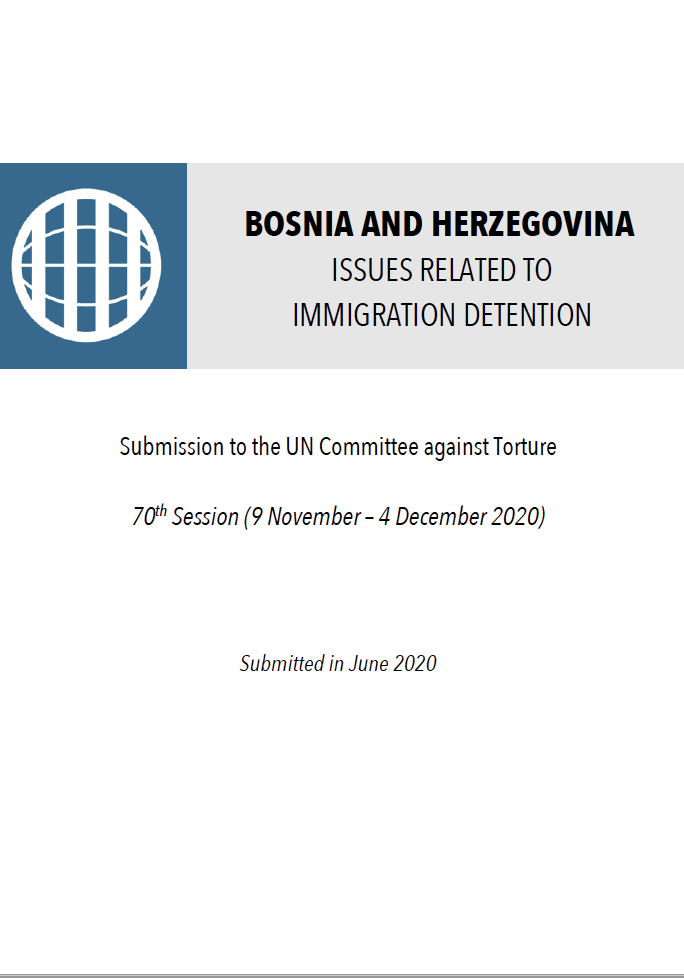 Submission to the UN Committee against Torture (70th Session: 9 November – 4 December 2020) – List of Issues Prior to Reporting

The Global Detention Project (GDP) is an independent research centre based in Geneva, Switzerland, that investigates the use of detention as a response to international immigration. Its objectives are to improve transparency in the treatment of detainees, to encourage adherence to fundamental norms, to reinforce advocacy aimed at reforming detention practices, and to promote scholarship of immigration control regimes. As per the GDP’s mandate, this submission focuses on the state party’s laws and practices concerning detention for immigration-related reasons.

In April 2020, the International Organisation for Migration (IOM) reported that the above mentioned facilities were in use, but also included the Blzuj temporary reception centre (built in 2019). IOM also reported the opening, with its assistance, of the Lipa Emergency Reception Centre, providing shelter and humanitarian needs for up to 1,000 single men, who had previously been sleeping rough in different types of informal accommodation in the Una-Sana Canton. Despite an IOM site profile providing some details on the facility, the nature of the centre remains unclear in terms of administration, custody, and security. While UNHCR indicates that people are effectively deprived of their liberty at Lipa, there are few reports detailing who has custody of these people, whether there are legal reports made indicating that they are detained, or who is ultimately accountable for abuses that may occur.

According to the UN Special Rapporteur on the Human Rights of Migrants, the Lukavic detention centre has a significant number of concerning issues. During his visit, a migrant had been placed in solitary confinement for a period of seven days due to allegedly violent behaviour. Two migrants detained in the facility claimed to be minors and that their claims had been dismissed without any age assessment procedures conducted. The Special Rapporteur mentioned that some detainees were deprived of outdoor activities for two months. He also reported that immigration detainees virtually “do not have access to free legal aid” and there is no information on how to request such aid is provided to detainees.

During a webinar organised by the OSCE’s Office for Democratic Institutions and Human Rights on 23 April, a Senior Regional Protection Officer at UNHCR raised concerns regarding reception centres in BiH in that more than two-thirds of the centres are overcrowded. UNHCR also mentioned that overcrowding in the largest reception centres makes isolation measures, including physical distancing, difficult to implement, and that limited freedom of movement may create tensions among residents. It may also risk a spike in incidences of gender-based violence.

While the UN Special Rapporteur underscored efforts made by the staff of UN agencies and civil society organisations to create dignified, child friendly, and gender sensitive living conditions during his visit to reception centres in 2019, he found that “in general terms, existing reception capacities for migrants including asylum seekers and the condition of some reception centres do not meet the current needs.” The Special Rapporteur observed that there is a lack of appropriate alternative housing for unaccompanied or separated children and victims of abuse or exploitation. In the Bira reception centre for instance, which is designed to accommodate single men, populations of men, unaccompanied minors, and families with children are housed.

The UN Special Rapporteur’s 2019 statement refers to the fact that children continue to be detained in BiH in poor reception conditions. In addition, the Ministry of Security has been found to not conduct age assessments which can lead to minors being exposed to manipulation, exploitation, and other abuses. During the Special Rapporteur’s visit to the Lukavica detention facility, two migrants detained at the facility claimed to be minors and that their claims had allegedly been dismissed by authorities without any age assessment.

For children residing in three temporary reception centres, Borici, Sedra, and Bira, UNICEF and Save the Children, in cooperation with the Ministry of Education and with support from the European Union, have been providing online classes.9 On 17 April 2020 however, UNICEF and UNHCR representatives called a meeting with authorities to relocate unaccompanied and separated refugee and migrant children living in difficult conditions in two most overcrowded centres, Bira and Miral.

As of 18 June 2020, BiH had reported 3,141 cases of Covid-19 and 168 deaths. On 28 April, UNHCR reported that there were no cases of Covid-19 affecting asylum-seekers, refugees, and migrants. Nonetheless, in these circumstances, detainees in BiH face a very serious risk. In addition to their already vulnerable situation, overcrowding and limited reception conditions create a risk of spreading Covid-19.

As public attitudes towards migrants and refugees rapidly deteriorate across the country, BiH’s Security Minister, Fahrudin Radoncic, suggested on 24 April, that migrants and refugees should be deported. Alleging that they pose too great an economic burden during the pandemic—as well as a security threat—the Minister stated that he would submit a proposal to Parliament. He said, “(migrants) who do not want to show their identity cards will not be allowed any more to use our migrant and refugee camps. They will go straight to jail. And we will keep them there for one to five years until we can establish their identity. This is our proposal for a new law.” In April, BiH’s Service for Foreigners’ Affairs (SFA), on the orders of the country’s Security Minister, began preparing a list of irregular economic migrants for deportation. Some 9,000 to 10,000 migrants are to be deported, and it is estimated that 7,500 migrants were registered in the seven reception centres across BiH at the end of April.

In an indication of the precarious situation faced by migrants and asylum seekers in the country, on 29 April the European Union announced 4.5 million EUR in humanitarian assistance to help vulnerable refugees and migrants in BiH. The fund is meant to support refugees and migrants accommodated in EU-funded temporary detention facilities as well as those sleeping outside in inadequate conditions. The fund is also intended to help hundreds of unaccompanied and separated children who are exposed to significant protection risks.

Based on the details provided in this submission, the GDP urges the UN Committee against Torture to consider requesting the following information from BiH authorities:

• Clarification of the nature and extent of deprivation of liberty in the country’s reception centres. There are conflicting reports about the nature of some of the newer “camps” that have been established to accommodate migrants and asylum seekers, in particular the IOM-assisted Lipa camp. If people are in fact deprived of their liberty at these sites, particular rights and obligations apply.

• Clarification regarding the Lipa emergency reception centre in terms of custodial authorities, security, and administration. Reports indicate that the IOM has hired guards. Are they intended to force people to stay in the camp? If so, who has legal custody of these de facto detainees? Who is accountable for their treatment?

• Details about measures taken to protect immigration detainees from contracting Covid-19 and any other measures the country may have taken in response to the pandemic, including whether it released detainees due to concerns about outbreaks and/or the impossibility of deporting people.

• Details regarding whether efforts have been made to investigate allegations of mistreatment of migrants during forced pushbacks and who is accountable for abuses that may have occurred.

• Information about conditions of detention within the Lukavica detention centre.

• Information regarding the status of the Vucjak facility and indicate the authorities responsible for detention and management of this facility.

• Statistics on the number of children detained.