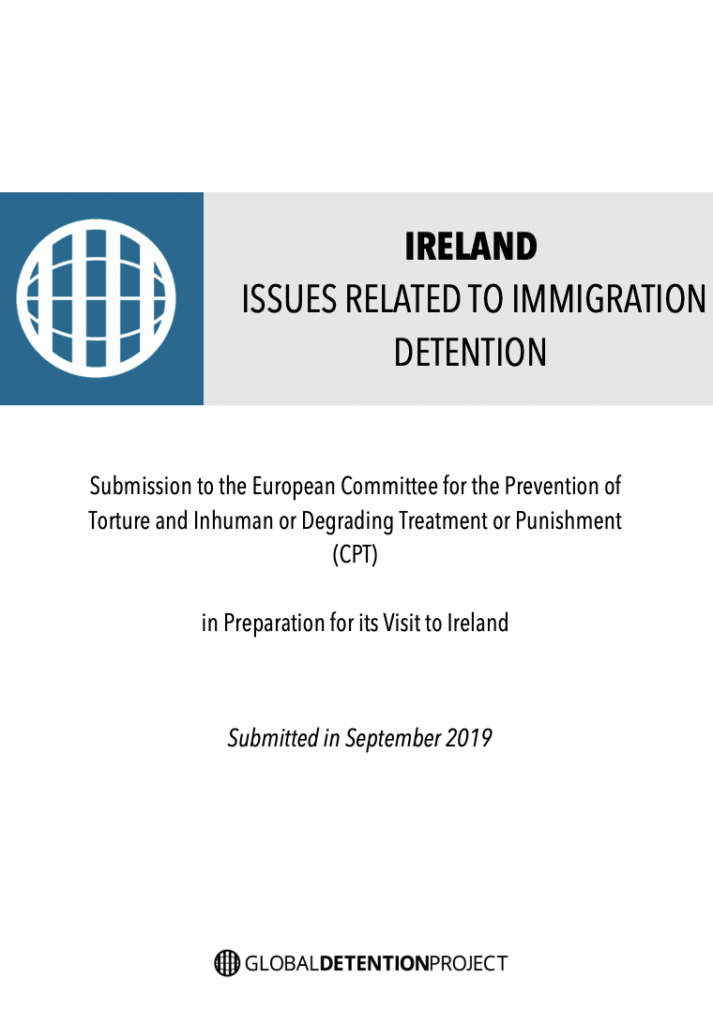 The GDP is pleased to provide the European Committee for the Prevention of Torture and Inhuman or Degrading Treatment or Punishment (CPT) the following submission in preparation for its visit to Ireland in 2019. The submission concerns detention of migrants and refugees. As such, it is informed by the CPT’s relevant standards as included in “Foreign Nationals Detained Under Aliens Legislation” (7th General Report of the CPT, CPT/Inf (97)10, 1997) and “Safeguards for Irregular Migrants Deprived of their Liberty” (19th General Report of the CPT, CPT/Inf (2009)27, 2009).

This submission is based on the GDP’s report on Ireland,[1] as appended. The key findings of our research include:

I. The use of penal facilities

Unlike its EU neighbours, Ireland does not have dedicated immigration detention centres. Rather, non-citizens subject to administrative detention can be confined briefly at police stations before being transferred to a select group of criminal prisons, which are operated by the Irish Prison Service (IPS). Importantly, because Ireland is not a state party to the EU Returns Directive, the practice of using penitentiaries for immigration purposes does not face the same legal challenges that it faces in other EU countries. The directive, which stipulates the use of separate facilities for this purpose, has led to rulings by the Court of Justice of the European Union (CJEU) against this practice, most notably in Germany.[2] Once the UK leaves the EU, Ireland will become the sole EU country not party to the Directive.

Observers have long criticised Ireland’s practice of confining immigration detainees in prisons, as well as the conditions of detention that asylum seekers and migrants face in these facilities. The CPT, [3] Nasc,[4] the Irish Refugee Council, the Immigrant Council of Ireland, the Irish Penal Reform Trust,[5] and the UN Committee against Torture[6] have been among the more prominent and consistent critics of Ireland’s use of prisons.

After its most recent visit in September 2014, the CPT reiterated that a prison is by definition not a suitable place to detain someone who is neither suspected nor convicted of a criminal offence. Rather, non-citizens should be placed in specific detention centres (para.19).[7]

Suggestions. Ireland may be encouraged to opt-in to the Returns Directive (like Denmark did) in order to ensure that the basic safeguards spelled out in the Directive are provided across the EU.

In response to CPT recommendations and numerous calls by other actors over the course of many years, in January 2015 Irish authorities announced that they had identified a suitable location at Dublin airport for establishing a facility for immigration detainees and that it would be ready in 2016.

The opening of the facility, however, has been repeatedly delayed. During parliamentary questioning in July 2016, an official at the Ministry for Justice and Equality stated that “plans are being progressed for the provision of a dedicated immigration detention facility at Dublin Airport. … This redevelopment will be completed as soon as possible within the next 12 months and will replace the existing Garda Station at the airport, provide office accommodation for Gardaí and civilians as well as providing a modern detention facility.”[8]

After numerous delays, in mid-2017 the Ministry of Justice stated that the construction of a dedicated immigration detention centre was to begin in September 2017 and would be completed by July 2018.[9] During parliamentary questioning in October 2017, authorities clarified that construction was still pending. The Minister of Justice and Equality confirmed that the commencement of the project’s development phase was due during the fourth quarter of 2017.[10] After more delays, in June 2018 the Minister for Justice and Equality stated that works had finally begun in May 2018 and were expected to be completed by December of that year.[11]

However, as of early 2019 the Dublin Airport facility had still not opened.[12] According to June 2019 news reports, Garda officials stated that the dedicated facility at Dublin Airport would open in 2019. The reports also indicated that the detention centre will be located in the Transaer House building, which would also host a new Garda station. The detention facility will supposedly be composed of two detention rooms.[13] One report indicated that the facility was ready for use but lay idle because of disputes over its use. According to this report, the facility has “detention pens” which are to be used for “inadmissible people” who are “denied entry to Ireland by the Border Management Unit when they land at Dublin Airport.”[14]

Reported descriptions of this facility raise questions about its adequacy as a dedicated immigration detention centre. In fact, one report indicates that it will be used for very brief periods, and if people cannot be removed immediately, they may be sent to police stations, as per long-standing practice in Ireland. According to this report: “Once a person is deemed ‘inadmissible’, they are either held at the airport by Garda National Immigration Bureau officers until they can be sent back, or, if a flight is not available until the following day, they are sent to a Garda station for the night. Children are housed in a hotel or reception centre with their mother, if she is present. These are not people seeking asylum at the airport, because anyone who does cannot be turned away by the State. Transaer House, on the outskirts of Terminal 1, is to replace the current Garda station. There are around a dozen gardai based at the station and all are to be relocated to Transaer House. However, the new station needs 30 more officers, and sources say management ‘simply cannot find the manpower.”[15]

Suggestions: There is a real need to confirm the status of this facility, its operating procedures, and its intended use. Available information appears to indicate that this facility is not the kind of specialised detention centre that the CPT and others have long called for. If it is not, the CPT may wish to inquire whether there are any plans for a specialised facility. This is particularly important in light of Ireland’s decision to opt-in to the EU Recast Reception Conditions Directive, which requires the state to provide a specialised detention facility for detained asylum seekers, amongst other measures.

Places of detention are specified in Irish law and can vary depending on the ground for detention. In total, nine prisons are authorised for immigration detention, together with every Garda station in the country (see list below).

Although nine prisons are listed, according to the Irish Department of Justice and Equality, by 2013 only seven prisons were in use for immigration-related reasons: Castlerea Prison, Cloverhill Prison, Cork Prison, Limerick Prison, Mountjoy Prison, Dochas (Mountjoy Women’s Prison), and Wheatfield Prison.[16] At one time, Ireland also reportedly used the Arbour Hill prison in Dublin to hold non-citizens for immigration reasons, despite the fact that it was not designated in the 2003 Immigration Act for this purpose.[17]

The prisons traditionally used for immigration purposes have been Cloverhill Prison (for men) and the Dóchas Centre at Mountjoy Prison (for women).[18] In 2014, 273 non-citizens were held in Cloverhill and 76 in Dóchas. However, as stated above, the prescribed places of detention for applicants detained under the 2015 International Protection Act (amended with the adoption of the 2018 Reception Conditions Regulations) include just Cloverhill Prison (and Garda Stations). According to the Irish Refugee Council, it is unclear where women are supposed to be held since these changes have been introduced.[19] Various observers, however, informed the GDP that Dóchas remains the main facility for woman detainees.

Individuals refused entry may be detained in Dublin Airport until the next available flight. According to Nasc, this is not a designated place of detention and those placed there do not have access to legal safeguards and basic entitlements, such as access to a lawyer, medical assistance, or substantial review of decision. Nasc also observed that at times people are not placed on the next available flight and thus spend several hours at the airport.[20]

During its previous visit to Ireland in September 2014, the CPT visited Cloverhill and Limerick Prisons, the Dóchas Centre, and police stations.

The CPT noted that there was no register of detainees in the holding room at Dublin Airport and recommended remedying it without delay (para.18)

Even though they can legally be used, the extent to which police stations are used also remains unclear. To date, the GDP has been unable to obtain adequate statistics detailing the numbers of people detained in police stations for immigration reasons.

Similarly, there are not adequate statistics on the number of immigration detainees in each prison.

Suggestions: The CPT may wish to verify whether all nine prisons continue to be used for immigration purposes and the extent to which police stations are used. How are non-citizens separated from people detained under criminal law in these facilities? How is their status as administrative detainees upheld? And can the country provide statistics on the numbers of immigration detainees placed in all facilities—prisons and police stations—or does it fail to keep such statistics?