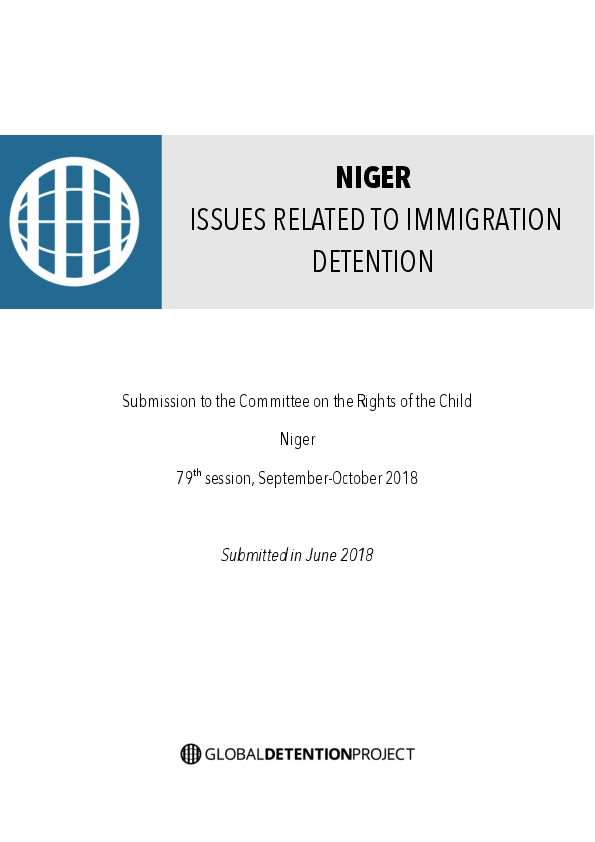 Submission to the Committee on the Rights of the Child

The Global Detention Project (GDP) welcomes the opportunity to provide information for consideration of the combined third to fifth periodic reports of Niger (CRC/C/NER/3-5) to the Committee on the Rights of the Child (CRC) dated 8 November 2017. The GDP is an independent research centre based in Geneva that investigates immigration-related detention. As per the GDP’s mandate, this submission focuses on the State Party’s laws and practices on issues related to detention for migration-related reasons.

This submission is made under Article 45(a) of the Convention on the Rights of the Child and mainly addresses implementation of CRC Article 37 (b)(c)(d) on deprivation of liberty. It is informed by the joint CRC/CMW General Comment No. 23 on “State obligations regarding the human rights of children in the context of international migration in countries of origin, transit, destination and return,” which provides that “child and family immigration detention should be prohibited by law and its abolishment ensured in policy and practice.”

Niger has long been a country of origin as well as of transit. More recently, there has been a steady flow of return migration as well as evacuations from North Africa.

In its humanitarian plan for Niger for 2018, UNICEF explains that “Multi-sectoral humanitarian interventions will cover new areas, including those affected by the Malian border crisis and locations registering increasing numbers of vulnerable migrant children returning from Algeria and Libya.”[1]

Since December 2017, the Italian NGO Cooperazione Internazionale (COOPI) has been working with the United Nations High Commissioner for Refugees (UNHCR) to “provide refugees from Libya with shelter and protection” as part of the Emergency Evacuation Transit Mechanism (ETM). COOPI houses refugees and asylum seekers evacuated by air from Libya in 17 transit centres in Niamey and six in Agadez before they are resettled.[2]

Since the start of the evacuation in late 2017, a total of 1,152 persons have been evacuated to Niger and as of mid-May 2018, 1,044 evacuees remain in the country, including 215 unaccompanied children. Persons evacuated to Niger include individuals processed in Libya for resettlement from Niger and those whose cases need to be processed in the country before interviews for resettlement to third countries can take place. The pace of resettlement to countries in the Global North is very slow and in March 2018, UNHCR had to temporarily suspend evacuations of African refugees due to a backlog of cases. In May 2018, evacuations were resumed and in mid-May, UNHCR reported that the total remaining capacity for accommodating evacuees in ETMs was 162. It thus called for more support to continue life-saving evacuations of persons trafficked into Libya. Aside from evacuees, Niger hosts 166,232 refugees. [3]

In 2016, the United Nations Committee on Migrant Workers (CMW) expressed concern regarding the lack of official data on “migration flows into, out of and through” Niger, as well as on migrant workers and members of their families in an irregular situation; migrant workers in detention; and unaccompanied and separated children. While the CMW noted the existence of “four holding centres for migrant workers in use based in Agadez, Arlit, Dirkou, and the capital Niamey,” it also commented on “the lack of information on the conditions in these facilities.”[4]

The “holding centres” referred to by the CMW in 2016 might be the open-type transfer transit centres operated by the International Organisation for Migration (IOM) in Arlit (300 places), Dirkou (150 places), Agadez (1,000 places), and three others in the capital Niamey (with 300 places in total). According to the IOM, these centres host migrants in the process of Assisted Voluntary Returns to countries of origin. One Niamey centre specifically accommodates unaccompanied minors and vulnerable women (including victims of trafficking). The IOM reports that it assisted 9,100 migrants in 2017 in these transit centres and in sub-offices in Diffa and Zinder. Most migrants in its transit centres were from West and Central Africa, and nine percent were minors (43 percent of whom were unaccompanied).[5]

According to the migration agency, the transit centres are “supported by the Migrant Resource and Response Mechanism funded by the EU Emergency Trust Fund for Africa [Fonds fiduciaire pour l’Afrique], through the EU-IOM Joint Initiative for Migrant Protection and Reintegration, and co-financed by the German Cooperation, the Governments of the Netherlands, France, Switzerland, DFID and DANIDA.” The Trust fund has allocated 91.9 million EUR to Niger to prevent irregular migration, including 32 million EUR to facilitate better management of migration in the country.[6] On 25 June 2018, media sources quoted an IOM official according to whom migrants expelled from Algeria “come by the thousands.” Journalists reported that “Unlike Niger, Algeria takes none of the EU money intended to help with the migration crisis.”[7]

In recent years, the Global Detention Project has documented a surge in immigration detention in countries receiving substantial financial assistance from EU and EU members seeking to prevent irregular migration and to improve migration management—for example, in Ukraine, Turkey and Libya. We thus think it is critical to underscore the possibility that international pressure on Niger and neighbouring countries in the current context will result in the detention of migrants, asylum seekers, and refugees, including families and unaccompanied children.

Niger’s Law No. 40 on the Entry and Stay of Foreigners (Ordonnance N°81-40 relative à l’entrée et au séjour des étrangers au Niger, 1981) provides for the removal of foreigners who arrive at borders without necessary documents and visas (Article 4). Under Article 5, foreigners can remain in Niger without a residence permit for up to 90 days. After this, as per Article 11, irregular stay without a residence permit (or failure to leave after an expulsion order) is criminalised and sanctioned with prison sentences for between two months and two years, and fines of up to 250,000 XOF (381 EUR). Article 16 provides for the expulsion of foreigners who are a threat to public order.

Decree No. 87-076 of June 1987 further regulates conditions of entry and residence for foreigners in Niger (Articles 31-33).[8] According to Article 31, foreigners without authorisation to enter the country can be refused entry and under Article 27, irregular stay can be sanctioned with a fine ranging from 4,000 to 50,000 XOF (up to 76 EUR) and up to 15 days in prison.

In 2010, Niger passed anti-trafficking law No. 86 setting-out prison sentences and fines for those found guilty of human trafficking. Article 50 extends protection and assistance to citizen and non-citizen victims of trafficking including medical, psychological, and legal assistance as well as shelter (Article 53). Foreign victims of trafficking in an irregular situation can be granted temporary residence permits during the penal process and even a permanent residence status (Article 62). In instances in which trafficked individuals are returned to their home countries, Article 63 provides that Niger must guarantee their security.

Following negotiations between Niger and the United Nations, a new independent National Human Rights Commission was established by Law No. 44 of 2012.[9] The Commission is empowered to receive complaints of violations, including of children’s rights (Articles 19, 20, and 30), to conduct investigations, and to promote the adoption of legislation on protection and promotion of rights. Article 19 mandates the Commission to conduct regular visits—both announced and unannounced—to places of detention and to make recommendations to relevant authorities.

In May 2015, under pressure from the EU to limit flows towards Libya and the Central Mediterranean, Niger passed anti-smuggling law No. 36 to tackle the smuggling (traffic illicit) of migrants.[10] In line with the Palermo Protocol, the 2015 anti-smuggling law classifies migrants as victims of rights abuses. The law highlights the particular needs of women, children, the disabled, and the elderly (Article 26). Article 29 provides special measures for smuggled children including the need for public authorities and institutions to consider the best interests of the child; to consider persons as minors while waiting for age determination; to interview smuggled minors in an appropriate setting in the presence of parents, a guardian, or a support person; and to ensure that smuggled children have access to education regardless of their legal status (or that of their parents) in Niger. Article 30 of the law provides for smuggled migrants deprived of liberty (arrêté, incarcéré or en detention preventive) to be promptly informed about their right to communicate with consular representatives.[11]

Implementation of anti-smuggling/trafficking laws has reportedly been mixed given the lack of a concerted training programme for judicial and security officials, the historical reliance of Nigerien communities and other actors (including officials) on informal economies such as people and/or goods smuggling, as well as reports of corruption within police and security agencies.[12]

It is worth noting that most migrants transiting through Niger are from the Economic Community of West African States (ECOWAS), and legal provisions regarding irregular entry and stay do not apply to them.[13]

2. Key Questions and Concerns Regarding the Immigration Detention of Children

In its Combined third to fifth periodic reports to the Committee on the Rights of the Child published on 8 November 2017, Niger provided statistics on the number of children deprived of liberty without reference to immigration status. The GDP recommends that the CRC asks the following questions: