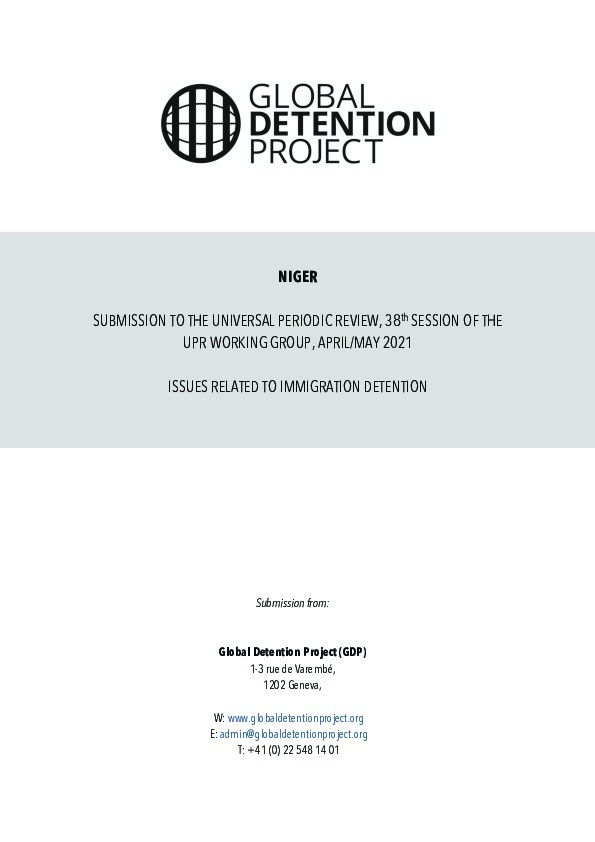 1.1 Niger has been the site of migration flows across the Sahel region for many years. It has also become an important transit country for migrants travelling north and on to the Mediterranean. The country hosts a large population of refugees: more than 126,000 refugees have sought safety in Diffa (south-east Niger) alone.[i]

1.2 Recently, Niger has become a destination and transit country for people expelled from Algeria and returned (forced or “evacuated”) from Libya. These returns have put a huge pressure on Niger, with some observers referring to the country as a “permanent transit centre.”[ii]

1.3 Despite border closures, the expulsion of undocumented migrants from Algeria into Niger has continued during the COVID-19 pandemic. Between 19 March and 18 April 2020 1,046 persons were deported by Algerian authorities into Niger,[iii] while more than 3,400 were expelled between early September and early October.[iv]

1.4 The country relies on the International Organisation for Migration (IOM) to assist non-Nigerien migrants expelled from Algeria. Migrants found in the desert are provided assistance at one of the six IOM-run transit centres. While these are open facilities, the main condition for staying is a willingness to return “voluntarily,” though with no other forms of support and assistance migrants may see this as coerced.[v]

1.5 In 2017, UNHCR established the Emergency Evacuation Transit Mechanism—a programme coordinated with international NGOs to remove vulnerable persons from detention in Libya and resettle them in third countries. In December 2017, UNHCR and Niger signed a Memorandum of Understanding, “temporarily expanding the Niger asylum space to these refugees.”[vi] As of June 2020, 27 evacuation flights had arrived in Niger from Libya, carrying a total of 3,208 people. On arrival in Niger, UNHCR conducts verification interviews. These are followed by refugee status determination procedures, conducted by UNHCR and the Nigerien government. During this process, non-nationals are housed in the ETM transit facility in Hamdallaye, which can hold up to 1,500 persons. UNHCR reports that migrants here are provided with food, medical care, education, and psychosocial support.[vii]

1.6 Niger has become a central focus of EU migration “management” strategies, with some observers dubbing it “the southern border of Europe.”[viii] By 2017, EU engagement had included a pilot project to convince migrants to stop their journeys[ix]; encouraging Niger to pass a law against migrant smuggling (Act No. 2015-36)[x]; a range of capacity-building projects for law enforcement authorities and the judiciary[xi]; and increased cooperation in the “fight against smugglers.”[xii]

1.7 At the start of 2019, President Mahamadou Issoufou credited Act No. 2015-36 with causing the number of migrants passing through Niger to drop sharply: from some 100,000/150,000 annually before 2016, to less than 10,000 by 2019. During a visit to Niger that same year, Italian Prime Minister Giuseppe Conte said that the number of migrant arrivals in Italy had subsequently dropped by 80 percent. [xiii]

1.8 While Act No. 2015-36 is ostensibly aimed at smugglers, it also impacts a broad array of activities and severely jeopardises migrants and asylum seekers. According to the UN Special Rapporteur for the human rights of migrants, although supporters of the law claim that it has “contributed to saving lives” of migrants in the Sahara, in reality its implementation “has resulted in the criminalisation of migration [north of Agadez] and has pushed migrants into hiding, which renders them more vulnerable to abuse and human rights violations.”[xiv] Indeed, the Act has resulted in a de facto ban on travel north of Agadez. Not only does this violate the principle of freedom of movement of ECOWAS (Economic Community of West African States) nationals, it has also forced migrants to go underground and face conditions that expose them to rights violations.[xv]

1.9 Article 38 of Act No. 2015-36 provides that the return of victims of torture and ill-treatment must comply with the principle of non-refoulement. However, in 2019 the Committee against Torture highlighted allegations that non-nationals had been removed from Niger despite the proven risk that they could be subjected to torture and ill-treatment in the country of return.[xvi]

2.1 Migration-related detention is limited in law to criminal forms of incarceration. Niger’s Law No. 40 on the Entry and Stay of Foreigners (Ordonnance N°81-40 relative à l’entrée et au séjour des étrangers au Niger, 1981) provides for the removal of foreigners who arrive at borders without necessary documents and visas (Article 4). Under Article 5, foreigners can remain in Niger without a residence permit for up to 90 days. After this, as per Article 11, irregular stay without a residence permit (or failure to leave after an expulsion order) is criminalised and sanctioned with prison sentences for between two months and two years, and fines of up to 250,000 XOF (382 EUR). Article 16 provides for the expulsion of foreigners who are a threat to public order.

2.2 Because Nigerien law does not explicitly provide for administrative migration-related detention, there are no provisions concerning the guarantees afforded detained migrants. Detainees have been reported to be denied access to legal assistance and legal representation.[xvii]

2.3 Nigerien immigration law does not distinguish between adults and children who are apprehended for immigration reasons. Reports indicate that children are kept in the same facilities as adults,[xviii] including in holding centres and humanitarian aid facilities used by UNHCR and other agencies.[xix] In mid-2018, campaigners drew attention to 260 children “stuck in limbo” in Niger after they were transferred from Libya to Niger awaiting resettlement.[xx]”

2.4 There is little detailed information on the treatment of migrants and asylum seekers in the country, including concerning the conditions of detention. Aside from scattered press and NGO reports identifying police stations—including the Police Commissariat in Agadez—that are used to hold arrested migrants and asylum seekers,[xxi] little effort appears to have been made to systematically report what happens to apprehended migrants in the country. In 2016, the UN Committee on Migrant Workers (CMW) noted the existence of “special holding centres for migrant workers based in Agadez, Arlit, Dirkou, and Niamey,” but also commented on the “lack of information on the conditions in these facilities,” as well as the “lack of statistics.” [xxii]

2.5 Reports point to the use of prisons to detain refugees, asylum seekers, and migrants apprehended north of Agadez, in line with the 2015 anti-smuggling legislation, which effectively bans any northward movement from Agadez.[xxiii]

2.6 Following negotiations between Niger and the UN, a National Human Rights Commission was formally established with the adoption of Law No. 44 of 2012. Article 19 mandates the commission to conduct regular visits—both announced and unannounced—to places of detention and to make recommendations to relevant authorities. Since 2017, the body has been awarded “A” status (“fully compliant with the Paris Principles”) by the Global Alliance of National Human Rights Institutions.[xxiv] After his visit in 2018, the UN Special Rapporteur on the human rights of migrants noted that the NHRC lacked sufficient resources to “conduct monitoring” and recommended that it “enhance its human rights monitoring activities in Agadez with respect to migrants.”[xxv]

3.1 During the COVID-19 pandemic, the Nigerien government has taken certain measures to avoid the spread of the virus, including border closures, travel bans with the country, and a mandatory two-week quarantine for people arriving in the country. The facilities in which non-nationals are required to quarantine—which reportedly include tent facilities at the border post of Assamaka and in Arlit—were reportedly not intended as places for prolonged isolation and are ill-equipped to respond to the needs of refugees and migrants isolating there.[xxvi]

3.2 With most air travel suspended, many non-nationals have found themselves trapped in transit facilities with no information available clarifying when they may be able to leave. As more non-nationals arrived in the country while repatriation and resettlement were on hold, facilities are reported to have become increasingly overcrowded.[xxvii]

4. RECOMMENDATIONS DURING THE 2ND CYCLE OF THE UPR

4.1 During the 2nd cycle of the Universal Periodic Review of Niger (24th session, January 2016), Niger agreed to examine several recommendations relevant to its immigration enforcement practices.[xxviii] These included:

5. RECOMMENDATIONS FROM OTHER HUMAN RIGHTS BODIES AND CURRENT CONCERNS

5.2 In 2019, the UN Committee against Torture (CAT) urged Niger to ensure full respect for the principle of non-refoulement, and thus refrain from expelling, returning, or extraditing persons to states where there are substantial grounds to believe that they will be in danger of torture or ill-treatment.[xxix]

5.3 During this same review, CAT stressed its concerns regarding certain provisions of Act No. 2015-36, which “provide for a repressive approach to migration.” The committee recommended that Niger (a) ensure that all allegations of acts of violence or force against migrants and asylum seekers are investigated, and that perpetrators are prosecuted and punished; (b) take necessary measures to ensure safe and decent reception conditions for asylum seekers and migrants in an irregular situation; (c) formulate clear guidelines and related training programmes on the identification of asylum seekers and migrants who are in need of international protection; and (d) place migrants in detention only as a measure of last resort.[xxx]

5.4 That same year, following its examination of Niger’s second periodic report, the UN Human Rights Committee recommended that Niger strictly enforce “the absolute prohibition of refoulement” under articles 6 and 7 of the Covenant.[xxxi]

5.5 In October 2018, the Special Rapporteur on the human rights of migrants encouraged Niger to amend its Law on the Illicit Smuggling of Migrants and make it compliant with international human rights norms and standards, as well as the ECOWAS principle of freedom of movement.[xxxii] The Special Rapporteur also urged Niger to adopt a comprehensive national migration management strategy that is child-sensitive, gender responsive, and fully respects the human rights of migrants.

5.6 In 2016 the UN Committee on Migrant Workers recommended that Niger establish a national information system on migration “to assist in the compilation of migration-related statistics and information covering all aspects of the Convention.”[xxxiii]

[xiv] The UN Office of the High Commissioner for Human Rights, “End of Mission Statement of the UN Special Rapporteur on the Human Rights of Migrants, Felipe González Morales, on his Visit to Niger (1-8 October 2018),” 8 October 2018, https://www.ohchr.org/en/NewsEvents/Pages/DisplayNews.aspx?NewsID=23698&LangID=E

[xxv] The UN Office of the High Commissioner for Human Rights, “End of Mission Statement of the UN Special Rapporteur on the Human Rights of Migrants, Felipe González Morales, on his Visit to Niger (1-8 October 2018),” 8 October 2018, https://www.ohchr.org/en/NewsEvents/Pages/DisplayNews.aspx?NewsID=23698&LangID=E