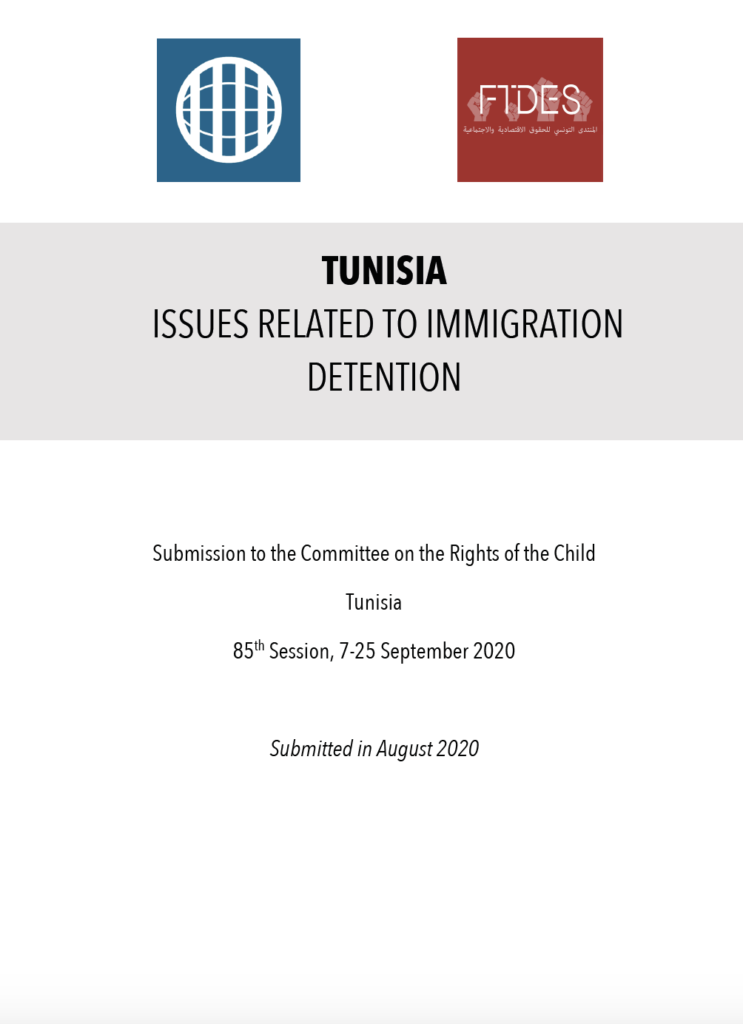 Joint Submission to the UN Committee on the Rights of the Child (85th Session, 7-25 September 2020)

The Global Detention Project (GDP) and the Forum Tunsien pour les Droits Économiques et Sociaux (FTDES) welcome the opportunity to provide information for consideration of the combined fourth to sixth periodic reports of Tunisia (CRC/C/TUN/4-6) to the Committee on the Rights of the Child (CRC).

The GDP is an independent research centre based in Geneva that investigates immigration-related detention. As per the GDP’s mandate, this submission focuses on the State party’s laws and practices on issues related to detention for migration-related reasons.

FTDES is a Tunisian non-governmental, neutral, and independent organisation that was founded in 2011 in order to promote economic and social rights at the national and international levels, with a particular focus on labour rights, women’s rights, environmental rights, and migrant rights.

This submission is made under Article 45(a) of the Convention on the Rights of the Child and mainly addresses implementation of CRC Article 37 (b)(c)(d) on deprivation of liberty. The submission takes into account the joint CRC/CMW General Comment No. 23 on “State obligations regarding the human rights of children in the context of international migration in countries of origin, transit, destination and return,” which states that “child and family immigration detention should be prohibited by law and its abolishment ensured in policy and practice.”

In recent years, Tunisia has taken on an increasingly important role with respect to migration and refugee flows within the region: in 2018, the numbers of “people of concern” to the UN High Commissioner for Refugees (UNHCR) nearly doubled, rising to more than 1,300 registered refugees and asylum seekers. By mid-2019, the number had almost doubled again, to some 2,500.[1]

The Tunisian government’s responses to these pressures have drawn criticism both domestically and internationally. Particularly concerning have been reports of forced expulsions and deportations into Algeria and Libya, with several reports in 2015 attesting that following some such deportations, migrants, lost in the desert and unable to find inhabited areas, had died.[2] In early March 2020, as the country began limited international travel into and out of the country in response to the Covid-19 pandemic, a video emerged online allegedly filmed inside the Al-Wardia (or El Ouardia) “reception and orientation centre” in Tunis. The footage appears to document police violently removing sub-Saharan Africans from the facility, some of whom appear to be quite young and possibly children, as part of a forced deportation operation in the middle of the night.[3]

Reportedly, non-nationals are regularly held in the Al-Wardia facility prior to their deportation. Today, this is one of two detention facilities that appear to be operating in the country (the second is the recently re-opened facility in Ben Guerdane in south-eastern Tunisia). In early 2020, authorities also announced plans to open a new reception centre, “Bir al Fatnassiya” (also “Bir Fatnassia”) approximately 25 kilometres outside of Remada in Tataouine Governorate, supposedly to house refugees fleeing Libya. However, some observers are concerned that the facility will eventually operate as a de facto detention facility.

Little information regarding these facilities is available—including disaggregated statistics detailing the number of persons to be detained, and their length of detention. In fact, no mention of the Al-Wardia facility even features on the Interior Ministry’s website—even in its list of institutions falling under its authority.[4]

The scant information that has emerged has detailed issues of concern including overcrowding; the insufficient provision of medical care and food; appalling hygiene conditions including toilets that are never or rarely cleaned; instances of police violence; and limited opportunities to make contact with the outside world.[5] Such conditions raise particular concerns amidst the Covid-19 pandemic, when confined populations are at an acute risk to the virus.

Tunisian law does not contain specific provisions providing for administrative immigration or pre-removal detention—instead, unauthorised entry, stay, and exit are explicitly criminalised and sanctioned with prison sentences and fines. Tunisia has also not yet adopted an asylum law, leaving the country without a protection framework. In January 2014, the country adopted a new constitution which enshrined a number of relevant protections. According to Article 29, the length of detention must be defined by law, and detainees are to be guaranteed various safeguards against arbitrary detention including: the detainee’s right to be informed of their rights and the charges under which they are being held, and the right to be represented by a lawyer.

In practice, however, non-nationals are regularly detained without legal basis or judicial control, are denied access to lawyers, and receive no written notification of the reason for their detention—raising serious concerns that non-nationals are being detained arbitrarily.

The apprehension and arbitrary detention of non-nationals appears to have continued during the pandemic, despite the UN Network on Migration urging countries to introduce a moratorium on the use of immigration detention.[6] However, in a first-of-its-kind ruling, in July 2020 the administrative court ordered the release of 22 migrants arbitrarily detained in Al-Wardia. According to the tribunal, their deprivation of liberty not only violated Tunisian domestic law, but it also violated the country’s international commitments—particularly with regards to the International Covenant on Civil and Political Rights (ICCPR) and the Committee against Torture (CAT). Recalling the principle that any deprivation of liberty must be based in law, the tribunal opined that the migrants’ deprivation of liberty did not meet the essential conditions required by the law, and as a result their release was ordered.[7]

Despite this ruling, shortly after the ruling was made government officials reportedly made conflicting announcements about the establishment of new migration-related detention centres with specific Covid-19 related purposes, though few details appear to have been released about where they will be located or who precisely they will detain.[8]

The joint CRC/CMW General Comment No.23 states: “the Committee on the Rights of the Child has asserted that the detention of any child because of their or their parents’ migration status constitutes a child rights violation and contravenes the principle of the best interests of the child. In this light, both committees have repeatedly affirmed that children should never be detained for reasons related to their or their parents’ migration status and States should expeditiously and completely cease or eradicate the immigration detention of children.”[9]

In its combined fourth to sixth periodic reports, Tunisia writes, “Generally speaking, the same protection measures are applied to foreign children as to Tunisian children. In fact, Tunisian law makes no distinction between Tunisia and foreign children, all of whom enjoy the same rights and are subject to the same protection measures. This included protection from exploitation, the right not to be detained, application of the principle of family unity, alternative care and the right to education, health, identity and nationality.”[10]

However, reports indicate that child refugees, asylum seekers, and migrants (including unaccompanied minors) are amongst those detained in Tunisia—in particular at the Al-Wardia centre. This was confirmed by the UN Special Rapporteur on human rights following a 2012 visit. Although the Special Rapporteur noted that children were detained separately to adult detainees, the GDP and FTDES have been unable to verify whether this remains the case as of July 2020. Following his visit, the Special Rapporteur noted: “detention, as a measure of last resort, should never be applied in the case of minors, especially unaccompanied minors, who are particularly vulnerable and who should be housed in shelters appropriate to their age. Moreover, irregular crossing of a border should not be a criminal offence, and a minor should never be criminalized for having crossed a border irregularly.” [11]

Despite such comments, in 2019 the administration of the Al-Wardia centre provided information that confirmed that 80 persons under the age of 18 (73 males and seven females) had been detained in the facility during the first ten months of the year.[12] Reportedly, children have also been amongst those forcibly expelled from the country. In 2019, numerous outlets reported the deportation of 36 Ivorian migrants across the border into Libya after their apprehension in the city of Sfax. Amongst them were three children. The group spent a week stranded in the Libyan desert with no food or water.[13] More recently during the Covid pandemic, Amnesty International reported that “at least one child” was amongst the dozens of detainees held in Al-Wardia. Many detainees had raised concerns regarding the lack of safeguards in place to protect them from the virus.[14]

Key questions and recommendations regarding the immigration detention of children

[4] Tunisian Forum for Economic and Social Rights, “Migrants Placed in the Wardia Centre: Detained, then Deported or ‘Forcibly’ Returned,” 2019.

[12] Tunisian Forum for Economic and Social Rights, “Migrants Placed in the Wardia Centre: Detained, then Deported or ‘Forcibly’ Returned,” 2019, http://ftdes.net/rapports/wardiacenter.en.pdf