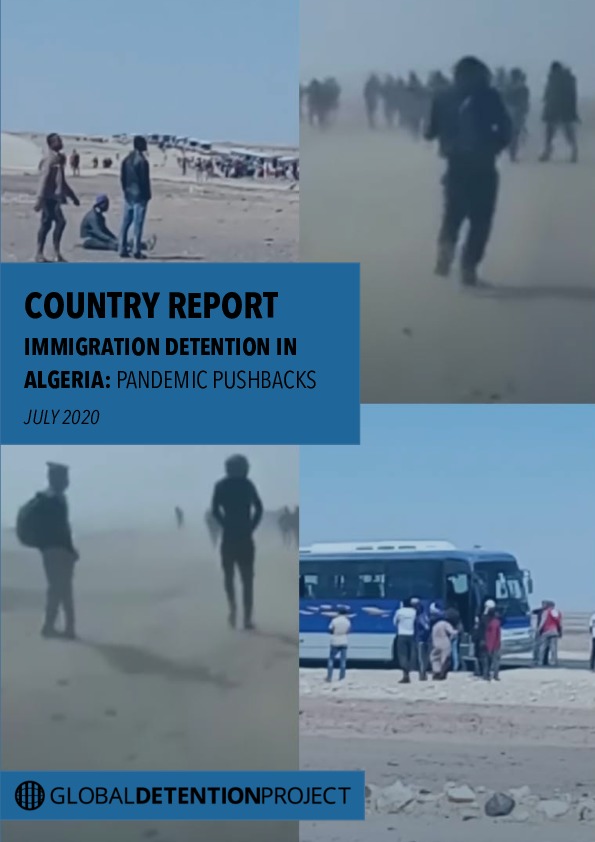 Reports from international organisations and other observers indicate that Algeria has, during the past decade, employed increasingly punitive methods to limit the entry and stay of refugees, asylum seekers, and undocumented migrants. There have been frequent accusations of arrests based on racial profiling, as well as reports of arbitrary detention and pushbacks across the country’s southern border. Sometimes under threat of violence, tens of thousands of people—including women and children—have been forcibly deported in desert areas bordering Mali and Niger. Many of the practices continued even as Covid-19 cases mounted in the country in early 2020.

Unlike many of its North African neighbours, Algeria has largely eschewed cooperation with the European Union (EU) on migration control schemes. While Libya and Morocco have struck numerous deals with the EU aimed at blocking migrants and asylum seekers, Algeria has generally rejected EU migration-related collaboration. Algeria does not regard “itself as a key interlocutor of the EU on migration,” beyond limited cooperation on border control and the return of Algerian nationals from Europe. This was notably apparent in the country’s rejection of proposals about establishing EU-funded “disembarkation centres” to process asylum seekers and migrants.

Nevertheless, Algeria has a long migration history with Europe, including the legacy of the pieds-noirs, people of French or other European origin who were born in Algeria during the country’s French colonial period (1830-1962). After Algerian independence, hundreds of thousands of “Black Feet” abandoned Algeria, moving mainly to France. In addition, throughout the colonial and post-colonial periods, large numbers of other Algerians migrated to France.

The country’s migration profile has changed dramatically in recent decades as Algeria has become an important destination and transit country for people from across the Maghreb, sub-Saharan Africa, and elsewhere. Large numbers of migrants from West and Central Africa have sought employment opportunities in the country—specifically within the construction and agriculture sectors. The country has also reported that many migrant workers in an irregular situation in the country come from as far away as China and Turkey.

Algeria does not have a national asylum system, even though it ratified the 1951 Refugee Convention and its 1967 Protocol. Since 2012, Algerian authorities have sought assistance from UNHCR in developing an asylum infrastructure, but to-date this is yet to be established, leaving refugees and asylum seekers who have an unresolved legal status vulnerable to detention, deportation, and other measures. While UNHCR conducts the registration of asylum seekers and refugee status determination, these processes do not necessarily protect them from arrest. UN agencies appear to have little access to detention facilities within Algeria.

During the past decade, and particularly since 2015, Algeria has appeared to adopt an increasingly hard line on migration issues with officials frequently blaming social ills on foreigners. Human rights groups accuse authorities of racial profiling and of arbitrarily rounding up large numbers of sub-Saharan migrants on the streets, during night-time raids, or at their workplaces, regardless of their legal status. They are reportedly taken to one of a series of detention facilities in urban centres along the Mediterranean coastline before being transferred to a police-administered camp in Tamanrasset, in the country’s far south.

According to migrant testimonies, media reports, and reports from human rights groups, Algerian authorities regularly force detainees into the deserts close to either the Algerian-Nigerien or Algerian-Malian borders. Some observers report that that men, women—including pregnant women—and even children have been forced to leave the country in this way, sometimes at gunpoint or under threat of violence. In June 2018, various media outlets reported that approximately 13,000 migrants had been abandoned in the desert in this way in the preceding 14 months, while that same year Algerian officials admitted to having deported some 27,000 people since 2015.

Algeria has in recent years deported tens of thousands of people to Niger, both Nigeriens and third-country nationals, including people from Guinea, Mali, Ivory Coast, Senegal, Burkina Faso, Nigeria, Niger, Liberia, Cameroon, and Sierra Leone. In December 2014, Algeria and Niger signed a “voluntary repatriation” agreement aimed at returning thousands of Nigerien nationals back across the southern border within a matter of months. However, Nigerien authorities questioned the extent to which returns can be voluntary given that they usually occur on the back of arrests and periods of detention.

UN agencies and local civil society groups have heavily condemned these expulsions. In an unprecedented call from Algerian civil society in May 2018, some 200 human rights activists, researchers, and artists denounced the wave of mass arrests and deportations targeting non-nationals. The UN and human rights groups have also emphasised that mass expulsions of mostly sub-Saharan African migrants goes against the country’s obligations under international law. With the onset of the Covid-19 pandemic, Algeria adopted some migration-related measures, according to sources from international organisations operating in the country. Responding to the Global Detention Project’s (GDP) online Covid-19 survey, representatives from the UN High Commissioner for Refugees (UNHCR) and an international non-governmental organisation reported that the country halted collective expulsions in March 2020. Other reports, however, indicated that officials continued to make forced, ad hoc expulsions in various border regions, particularly into Niger. At the time of this report’s publication, the GDP had been unable to find any reports indicating whether the country had taken steps to protect detained migrants or refugees. Instead, reports suggest that despite the virus’ spread, Algerian authorities have continued their efforts to block unauthorised migration from sub-Sarahan states, including detaining migrants clandestins and arresting alleged traffickers.

Joint Submission to the UN Committee on Migrant Workers: Algeria (2018)

Immigration Detention in Niger: Expanding the EU-Financed Zone of Suffering Through “Penal Humanitarianism”?