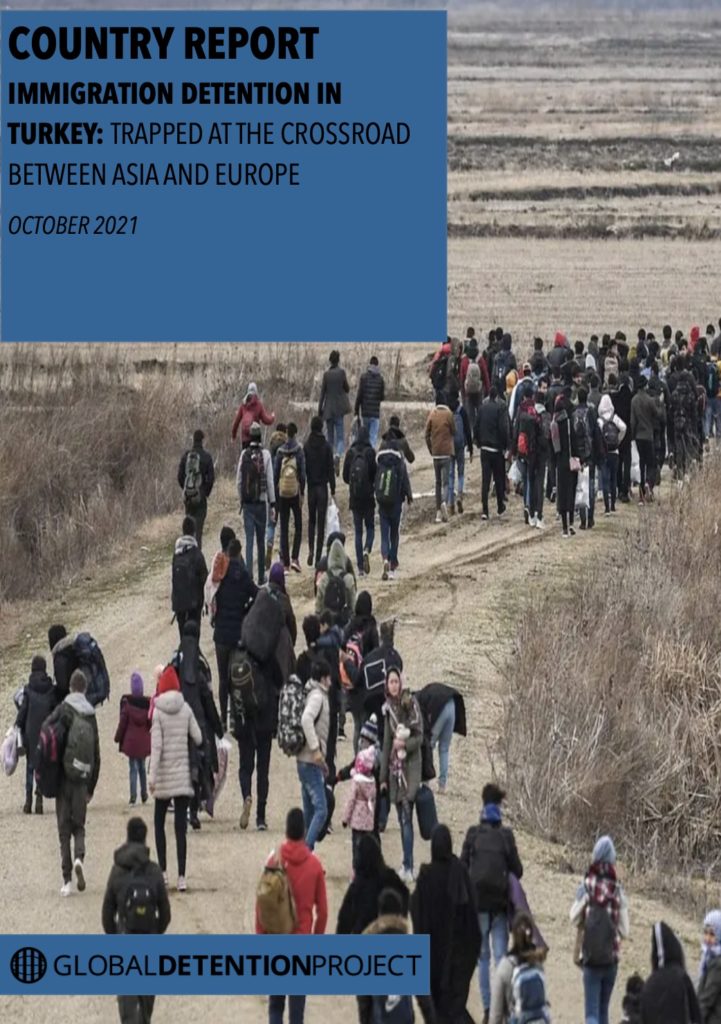 Turkey has one of the world’s largest migration-related detention systems, operating more than two dozen removal centres with a capacity of nearly 16,000 in addition to ad hoc detention sites along its borders, airport transit zones, and police stations used as temporary lock ups for apprehended migrants and asylum seekers. A reluctant gatekeeper for refugees, asylum seekers, and migrants seeking to enter Europe, Turkey’s influential role has repeatedly been put on display, including in the wake of the refugee “crisis” in 2015, which culminated in the controversial EU-Turkey refugee deal; and, more recently, after the 2021 Taliban takeover in Afghanistan, which spurred an exodus of Afghan refugees trying to reach Turkey. Turkey constructed a 295-kilometre wall and surveillance system along its border with Iran and has engaged in often violent pushbacks, detention, and deportation of Afghan refugees.

Turkey has one of the world’s largest immigration detention systems, which is comprised of some two dozen “removal centres,” ad hoc detention sites along its borders, transit facilities in airports, and police stations. The country’s immigration and asylum policies have been shaped by numerous factors related to its geography, history, and politics. Its relationship with the European Union (EU) has been particularly crucial because of Turkey’s location between the EU and the Middle East and other parts of the world.

Turkey’s crucial geography with respect to migration and refugee movements came under a spotlight in mid-2021 after US and other international forces pulled out of Afghanistan, spurring thousands of people to flee the country. Already host to 300,000 Afghan refugees, the Turkish government was unequivocal in its response, stating that it could not take in any more Afghan refugees and that it wouldn’t be used as a “migrant storage unit” for refugees trying to reach Europe. Afghans in Turkey do not enjoy protection under the 1951 Refugee Convention nor temporary protected status like the Syrians, which leaves them at constant risk of deportation, as well as targets of racist attacks and hate crimes. An estimated 53,000 Afghans were deported from Turkey between 2018 and 2019.[2] In 2021, fearing a new influx of migrants and refugees, Turkey constructed a wall and surveillance system along its 295 kilometre border with Iran to prevent refugees from entering the country. The country also summarily expelled thousands of Afghans, including women and children.[3] Afghan families described repeatedly trying to cross the border into the Van region of Turkey that borders Iran, being caught by the police and deported or detained.[4]

In 2015, during Europe’s “refugee crisis,”[5] hundreds of thousands of people transited Turkey en route to Europe.[6]Brussels subsequently negotiated an agreement with Ankara aimed at stemming refugee flows. The controversial 2016 EU-Turkey deal established that Turkey would prevent refugees from leaving its territory for Europe, and that all migrants and asylum seekers who arrived on Greek islands after 20 March 2016 would be liable to return to Turkey.[7]For every migrant or asylum seeker returned to Turkey, the EU would resettle one Syrian from Turkey. Turkey was also promised six billion EUR, the lifting of EU visa requirements for its nationals, and the resumption of Turkey’s EU accession process.[8] While the EU justified the return of migrants and asylum seekers to Turkey on the “safe third country” principle, it was widely acknowledged that Turkey would fail to fulfil the criteria to be considered safe for refugees.[9]

In February 2020, just before the onset of the COVID-19 pandemic, Turkey announced that it would open its borders with Europe and cease efforts to stop refugees from crossing. In a televised speech, Turkish President Recep Tayyip Erdogan accused EU leaders of failing to keep their promises to help Turkey shoulder the refugee load.[10] Thousands of migrants and refugees travelled to the Greece-Turkey border, with some reports suggesting that Turkish police had transported groups to border areas and shown them where to cross.[11] Greek security forces deployed at the border used tear-gas, water cannons, and stun grenades to prevent border crossings.[12] Some people were reportedly detained, assaulted, robbed, and stripped by Greek security forces before being pushed back into Turkey.[13]

Turkey has received widespread criticism of its treatment of refugees, which has included issuing emergency decrees that ease rules for deporting asylum seekers. A decree issued in October 2016 (Decree 676), which expanded the grounds for deporting people still engaged in international protection proceedings,[14] resulted in increased deportations of refugees and asylum seekers to countries[15] like Afghanistan, Syria, and Iraq.[16] In July 2019, authorities in Istanbul announced raids, stop-checks, and arrests of Syrian refugees registered in other cities.[17] The raids were followed by summary deportations into northern Syria.[18]

Turkey has sought to counter criticism of its treatment of Syrians by arguing that nearly half a million people have returned to Syria voluntarily in recent years.[19] However, observers argue that many of these departures are far from voluntary. For instance, in a widely noted 2019 report, Amnesty International related the accounts of Syrian deportees who alleged having been beaten or threatened with violence to coerce them into signing “voluntary return” documents.[20] Such expulsions have taken place against the backdrop of Turkey’s desire to establish a “safe zone” along its border with Syria, a plan that the Erdogan administration rapidly sought to achieve following US President Donald Trump’s military pullback from Syria and Turkey’s ensuing military offensive against the Kurdish People’s Protection Units (YPG) in late 2019. Expulsions have also been buttressed by surging anti-foreigner rhetoric, particularly aimed at Syrians, which has featured heavily in political campaigns[21] and been accompanied by attacks on Syrian refugees and Syrian-owned properties.[22]

In April 2020, the Turkish Parliament passed a law allowing for the release of up to 100,000 prisoners from Turkish jails in response to the COVID-19 pandemic.[23] By June 2020, a total of over 64,661 prisoners had been temporarily released.[24] However, according to research carried out by the Global Detention Project in December 2020, there were no reports of any immigration detainees being released for COVID-related reasons between April and December 2020. Moreover, the Turkish government did not delay or stop issuing administrative detention orders as a result of the global pandemic and regular reporting to the Provincial Directorate of Migration Management as an alternative to detention was suspended during the pandemic. Removal decisions also continued to be issued during this time. The GDP received reports that detainees being held in overcrowded centres were transferred to less crowded ones to facilitate social distancing. No other measures appear to have been taken to prevent the spread of COVID-19 amongst immigration detainees or to provide adequate care to those who fell ill, there was no obligatory quarantine on release from immigration detention, and migrants and asylum seekers were not routinely tested for the virus.[25] Refugees and migrants have also faced difficulties in accessing COVID-19 vaccines. Officially entitled to health care, including vaccines, language barriers, difficulties accessing information and booking systems, and fears of being reported to the police and deported have prevented many refugees and migrants from getting vaccinated.[26]

[1] The Global Detention Project (GDP) would like to thank the International Refugee Rights Association for providing helpful comments and corrections on an earlier draft of this report. The GDP also wishes to acknowledge the important assistance we received from the annual reports on Turkey produced by the Asylum Information Database of the European Council on Refugees and Exiles. Any errors in the report are those of the GDP.

[7] The EU-Turkey deal ultimately diverted the migration flow to Italy, and in 2016 arrivals to Greece had decreased to 170,000. See: UN High Commissioner for Refugees (UNHCR), “Refugees and Migrants Sea Arrivals in Europe,” December 2016, https://data2.unhcr.org/ar/documents/download/53447

[8] Visa-free travel for Turkish nationals has long been a goal of the Turkish government in its engagements with the EU. During negotiations over the 2013 readmission agreement and later, at the finalisation stage, Turkey made the signing, ratification, and future implementation of the agreement directly conditional on progress towards a visa-free regime between Turkey and EU. A “visa dialogue” was launched between the two sides on the same day the readmission agreement was signed, however talks over accession and visa-free regimes has been stalled by political controversy within Europe over Turkey’s candidacy as well as widespread repression in the wake of the failed July 2016 coup attempt. For more information, see: Deutsche Welle, “European Parliament Votes to Suspend Turkey’s EU Membership Bid,” 13 March 2019, https://www.dw.com/en/european-parliament-votes-to-suspend-turkeys-eu-membership-bid/a-47902275; O. Durukan (Helsinki Citizens’ Assembly Turkey), Notes on draft detention profile, Global Detention Project, 3 April 2014.