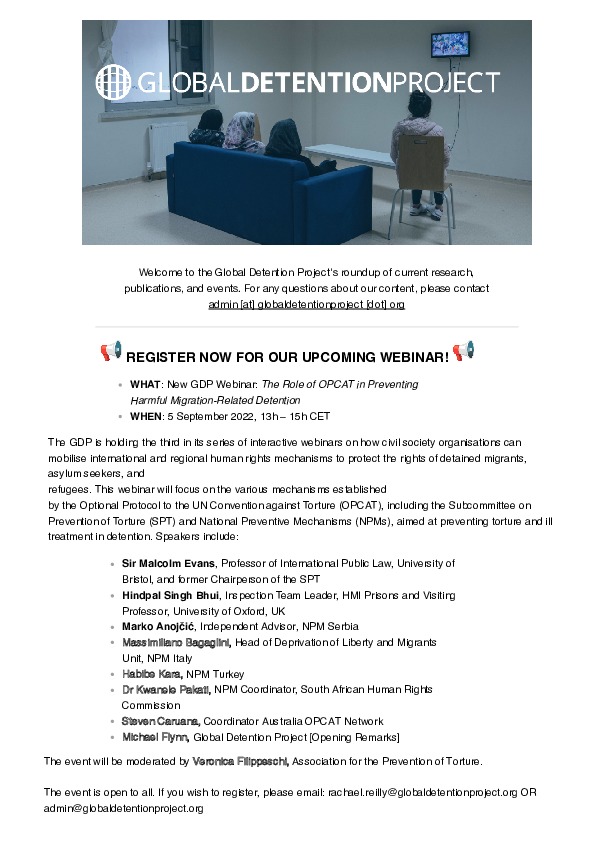 REGISTER NOW FOR OUR UPCOMING WEBINAR!

The GDP is holding the third in its series of interactive webinars on how civil society organisations can mobilise international and regional human rights mechanisms to protect the rights of detained migrants, asylum seekers, and refugees. This webinar will focus on the various mechanisms established by the Optional Protocol to the UN Convention against Torture (OPCAT), including the Subcommittee on Prevention of Torture (SPT) and National Preventive Mechanisms (NPMs), aimed at preventing torture and ill treatment in detention. Speakers include:

The event will be moderated by Veronica Filippeschi, Association for the Prevention of Torture.

The Committee on the Elimination of Racial Discrimination (CERD) raised critical questions about the treatment of refugees and migrants in Zimbabwe during its recent periodic review of the country. In a press release about the review, the CERD noted various issues that were raised by the GDP and Lawyers for Human Rights in their joint submission to the CERD, in particular concerning confinement in Tongogara Camp, the detention of non-nationals alongside convicted criminals, and forced removals. Several of our points regarding detention conditions were subsequently included in the committee’s Concluding Observations.
Read the submission / Read CERD’s press release / Read CERD’s Concluding Observations / Visit the GDP’s Zimbabwe page

In July, the UN Working on Arbitrary Detention (WGAD) visited Botswana to conduct a comprehensive analysis of the situation concerning arbitrary deprivation of liberty. To assist the working group during preparations for its visit, the GDP and Lawyers for Human Rights (LHR) provided the Working Group with a detailed submission highlighting immigration detention concerns in the country. Following its mission, which included a visit to Francistown Centre for Illegal Immigrants and Dukwi Refugee Camp, the Working Group issued a press release in which they echoed many of the GDP and LHR’s concerns regarding the country’s automatic—and often indefinite—detention of irregular migrants and its appalling detention conditions. The WGAD stated: “Detention in the course of migration must be an exception and is only permissible for the shortest period of time, following an individualised assessment of the need to detain.”

Our New Blog, “The Immigration Detention Monitor,” is now live!

The GDP has today re-launched its COVID-19 monitoring platform as “The Immigration Detention Monitor.” Although COVID-19 continues to affect immigration detention policies and practices around the world, the GDP has increasingly seen a need to track and report developments beyond the COVID-19 lens. Our newly updated blog will track all of the latest developments in migration-related detention practices and policies, urgent appeals, and emerging situations across the globe. We welcome information and contributions from readers, so please write to us at research@globaldetentionproject.org, and read the blog here.

Intern with the GDP!

We continue to welcome applications from students interested in volunteering with the GDP. Interns gain experience across the organisation—including in research, data analysis, and communications—and past interns have moved into a range of exciting careers including academia, law, and advocacy. (One of our more recent interns, Stella Warnier, was recently selected to work as a law clerk at the Supreme Court of Canada in 2023-2024—congratulations Stella!) Interested individuals should submit their CV and a letter of interest to admin@globaldetentionproject.org.

Reflecting on the GDP’s notable achievements in 2021 and our efforts to ensure that global tools have local impact, our Annual Report takes a look at key highlights such as the launching of our interactive webinar series introducing local activists to international human rights tools; working closely with civil society partners from every region of the world to bring attention to human rights violations faced by detained migrants and asylum seekers; and mobilising key actors in both regional and UN human rights systems to directly address urgent situations. Read the full report.

Australia’s migration detention system is an extreme global outlier: It detains people far longer than any other country; the costs of detention are astronomical; the country detains everyone–including children–without a visa; it hides asylum seekers from the legal system by locking them up “offshore”; it places detainees in the hands of private contractors accused of abuses and cutting corners; and it has turned migration detention into a global race to the bottom as other wealthy countries seek to emulate Australia’s arbitrary detention model. In its first major report on Australia since 2008, the Global Detention Project exposes one of the world’s most abusive immigration detention systems. Read the full report.

“The Global Detention Project has documented ‘sustained growth’ in detention numbers in most major industrialised countries over the last 15-20 years, despite international law stating they should only be used as a ‘last resort’ … In some EU member states – including Germany, Sweden and Croatia, where the Global Detention Project said such systems have become entrenched – the number of people placed in detention more than doubled in the past few years.” – H. Barber, The Telegraph, 21 July 2022